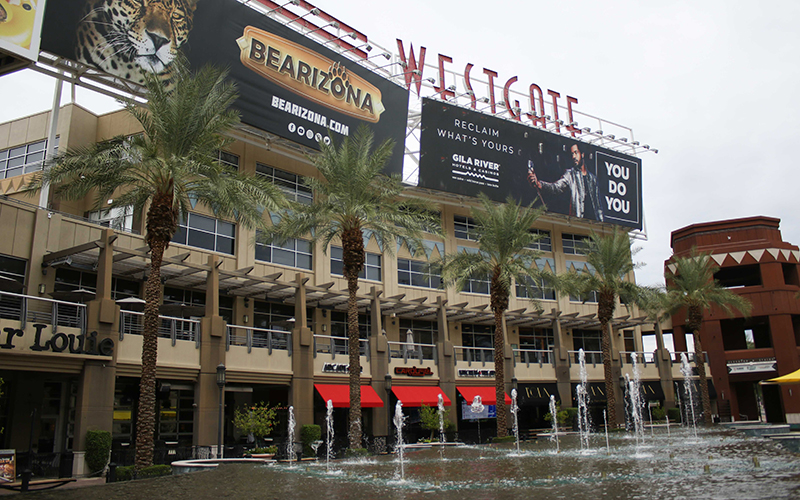 The Westgate Entertainment District was developed to support the NHL Coyotes, who moved to Glendale in 2003. With the team leaving, new attractions, such as PopStroke, a Tiger Woods project, are in the works. (Photo by Harrison Zhang/Cronkite News) 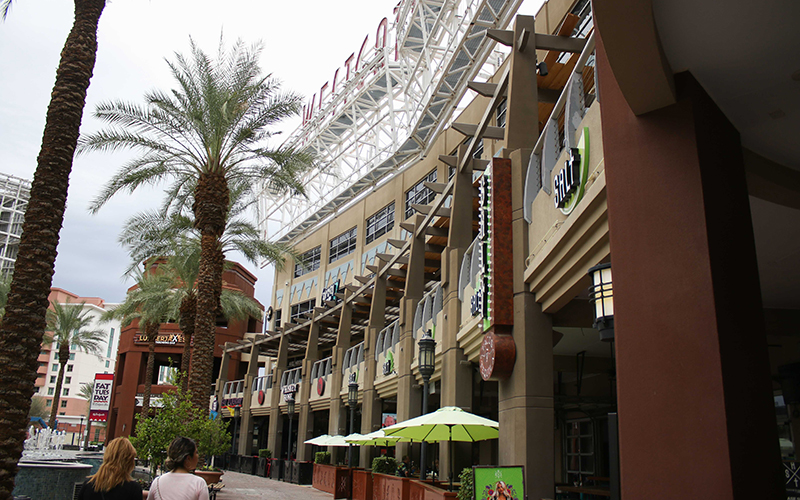 Westgate’s owner says the goal is to transform the entertainment district into an experiential hub. (Photo by Harrison Zhang/Cronkite News) 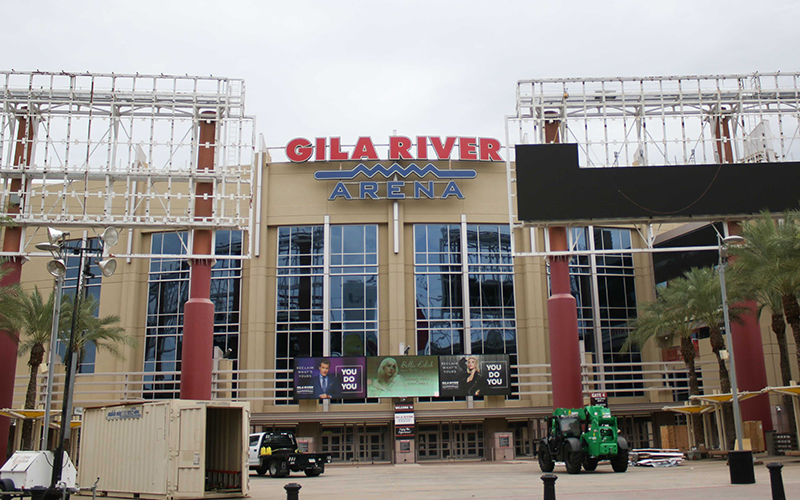 The Arizona Coyotes are leaving Gila River Arena after the 2021-22 season. They play about 50 games a year there. (Photo by Harrison Zhang/Cronkite News)

PHOENIX – Westgate Entertainment District was developed primarily to accommodate fans attending Arizona Coyotes games at nearby Gila River Arena. For years, however, rumors swirled about the NHL team’s search for a new home and what that might mean for Westgate.

Now, after 18 years as home to Arizona’s NHL team, it’s official: The Coyotes are leaving Glendale after the 2021-22 season, possibly for a new building proposed in Tempe. In August, Glendale announced it is terminating its operating agreement with the team.

But city officials and district tenants say Westgate is ready to flourish without the local hockey team.

The Coyotes moved to Glendale in 2003 from America West Arena (now Footprint Center) in downtown Phoenix because the NHL and the Coyotes were unhappy with that arena’s many obstructed-view seats when it was configured for hockey.

That led to development of Gila River Arena near Loop 101 and Glendale Avenue, along with Westgate Entertainment District, designed to provide shopping, dining and nightlife for people coming to the arena and, later, State Farm Stadium, which opened in 2006 and is home to the NFL Arizona Cardinals and college football’s PlayStation Fiesta Bowl.

Since then, however, Westgate has developed into a prosperous entertainment hub that has been preparing for the possible departure of the Coyotes, who play 41 regular-season home games, a couple of preseason games and – in their good years – a handful of playoff games at the arena each year.

“They’ve been talking about moving for years,” Phelps said. “That really kind of forced us to then contemplate, ‘Well, if they do move, what would be our game plan?’”

An economic study commissioned by the city suggested that pivoting from a hockey strategy to a live entertainment strategy would be the best direction for Westgate, the city said.

“What we learned is that, not only would we survive without the Coyotes, but we felt that if we did the things right, we would actually thrive without them being here,” Phelps said.

Along with the lack of a long-term commitment from the Coyotes, the city faced scheduling conflicts for other events at Gila River Arena.

The NHL does not announce its schedule until late April each year for a season that begins in October. The uncertainty of dates the Coyotes would use the building each year made it difficult for Glendale to schedule concerts or other events at Gila River Arena.

According to the study, which was conducted by Phoenix-based research firm Applied Economics, Glendale could easily cover the loss of revenue from Coyotes fans.

“In terms of spending at Westgate only (outside the arena), it would take approximately 20 additional concerts or large other events (with attendance of 10,000 or more) to equal the same amount of sales tax revenues to the city as 43 Coyotes games,” the study said.

Chad Wilford, owner of Fat Tuesday, a Mardi Gras-themed bar with New Orleans style food, is confident his restaurant doesn’t depend on the Coyotes.

“The concerts that will sell out or have larger ticket sales affect our business a lot more than most Coyotes games,” he said. “Most Coyotes games are during the week, and they don’t have the same attendance that a national concert coming to town would.”

Glendale is negotiating with an architectural firm to redesign Gila River Arena, with a focus on enhancing concert experiences.

Over the years, the ownership of the Westgate Entertainment District has changed several times. Currently, Bob Parsons, founder of GoDaddy.com and PXG Golf Clubs, owns Westgate. Under the current ownership, the goal is to transform the district into an experiential hub.

Among the attractions coming to Westgate is a Tiger Woods project, PopStroke. The golfing legend tweeted in May that PopStroke, a TGR Design and Tiger Woods Ventures partnership that designs facilities featuring two 18-hole Woods-designed putting courses along with restaurants, bars and lawn games, will expand to seven new locations – including Westgate by fall 2022.

“The number of new tenants at Westgate speaks to the growing opportunities in the West Valley and the high demand for more entertainment and dining options in this part of town,” said Dan Dahl, director of YAM Properties, the Phoenix commercial real estate firm that manages Westgate. “The area really is booming and continues to foster economic growth and development. Its rapid expansion will only continue to bolster our business.”