PEORIA – It was a moment of celebration but also melancholy as Doug and Shannon Hoffpauir led a crowd to the middle of the Centennial High School football field. They passed by the No. 31, now painted in the team’s red and white above the 31-yard line, that will forever represent everything they believed their son Zach valued.

“The sad thing about it is that Zach loved this: People, fun times, this is who Zach was. He’d have been out there, messing with everyone,” Doug said. “And so, that was kinda hard, because these are the things that Zach loved, this is where he wanted to be.”

Hoffpauir passed away on May 14, 2020, and was honored Friday by his alma mater during its game against Hamilton. He was 26. The night before his death, his mother said he went to bed after taking Percocet, an oxycodone-acetaminophen pain killer that Hoffpaiur acquired from a friend, just to get his first full night of sleep in weeks.

The next morning, Hoffpauir did not wake up. Zach’s father, Doug, remembers waking up and knowing something was wrong.

Zach Hoffpauir’s family leads friends on the field at halftime of the Centennial-Hamilton game. His father said Zach would have loved the celebration. (Photo by Mary Grace Grabill/Cronkite News)

“That morning (May 13) I went to go fishing,” said Doug in a Sports360AZ documentary, “Zach Hoffpauir: The Real Story.” “I got up at 3, we talk a little bit. He goes ‘I would love to go fishing with you and papa but I have too many video things going on today with school.’ So the last thing we talked about I just said, ‘Zach I love you,’ and he goes ‘Yeah, I love you, too.’”

“That’s the last thing he said. … I came back somewhere around 11:30, I was really tired and his door was still shut. So I went to sleep, then I woke up and I just had this weird feeling.

“I went into his room and he was gone.”

The pills had been laced with fentanyl, according to a report from the Maricopa County Medical Examiner’s office. While Zach’s official cause of death is an accidental overdose, Zach’s mother, Shannon, feels that even this label is disingenuous.

“For a report to come out, ‘Just another athlete who died of a drug overdose,’” Shannon said. “That doesn’t tell the story,” 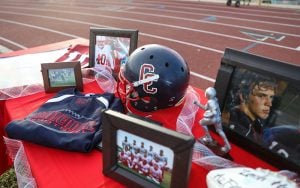 Friends remembered Hoffpauir for his energy and personality. You could just feel the charisma coming off of him,” Justin Sanchez said. (Photo by Mary Grace Grabill/Cronkite News)

At Centennial, Zach was a multi-sport athlete. Football, baseball, basketball and track, it didn’t matter. He was the definition of a natural athlete.

“I didn’t coach him as a freshman, but I most certainly knew about him, ‘cause he was the talk (of the town),” Centennial football coach Richard Taylor said. “At that time, we didn’t bring freshman up (to varsity), but he probably could’ve played on the varsity team as a freshman.

“I got to know him after the freshmen football season was over, ‘cause he also started on the varsity basketball team at point guard as a freshman. And I said, ‘That’s that Hoffpauir kid that plays football?’”

In school, Zach was loved by many that knew him for his wit and his engaging personality.

“Zach was the type of person who you could just feel the charisma coming off of him,” said Justin Sanchez, a teammate of Zach’s on the Centennial football team. “He could walk into a room and light up the room.”

Matt Rodriguez, another teammate, said, “He made plays, he was always talking, he was always clowning, roasting everybody, no one talked trash better, no one was more confident than Zach. He had a gregarious personality and we all loved him. He was our – he was kinda like our heartbeat honestly, he was the personality of the team.”

He was the personality of the school, too, said Diane Dunham, a history teacher at Centennial. Despite never having Zach as a student, she knew him well during his time there.

“You knew when (Zach) was coming down the hallway. He would talk to anyone,” she said.

People enjoyed being around him.

On the field, Zach excelled in baseball and football, and earned All-American honors for both. Although he had a plethora of offers from Division I colleges for baseball or football, Zach wanted to play both. This narrowed his choice to two colleges: Arizona State and Stanford.

Zach’s heart was with ASU, Shannon said in the documentary, But pressure from his family, his friends, and himself, influenced Zach into choosing Stanford.

“The pressure was. ‘You don’t pass up Stanford,’” Shannon said.

At Stanford, Zach thrived on the football and baseball fields. But as he played through those first three years, he began to feel the effects of playing two sports at an elite collegiate level, while also meeting the academic standards of a college like Stanford.

When Zach took that step up from high school athletics to college athletics, Zach began to feel as if he was losing his passion for the game, his father said.

“Now all of a sudden, sports became a business,” Doug said in the Sports360AZ documentary.

Zach struggled with his mental state.

“After games, I was like, ‘I don’t feel happy, I feel relieved’, but then I’m thinking about the next one, and I’m all stressed out again,” Zach said on the podcast “Untold with Jordan Simone” in September of 2019. 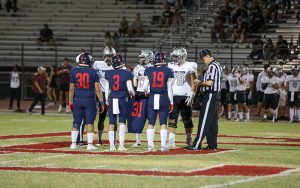 Every time Centennial players step on the field, they will walk by the No. 31 painted near the 31-year-line. (Photo by Mary Grace Grabill/Cronkite News)

The same pressure that pushed him to Stanford is what kept him there for three years. Zach acknowledged that he felt the weight of those who were rooting for him, those that dreamed so highly for him, and could not bear the thought of letting them down.

Then came Zach’s way out, in the form of the 2015 MLB Draft. Drafted by the Arizona Diamondbacks with the 646th pick of the 22nd round, Zach split time between Missoula, Montana, and Hillsboro, Oregon. Out of the limelight, away from the studies and the pressures around him, Zach found his respite and could focus on keeping himself at peace and playing baseball.

But within a year, he began to feel the itch for football again. So much so, that he decided to pack up his bags and head back to Stanford to complete his senior year and have one more run with Stanford. He returned and won back his starting position at free safety, and had a strong start to the season before two concussions in back-to-back games ended his season and ultimately, his football career.

Zach would come back to Arizona, medically retired from football. He made his return to baseball in 2018, once more splitting time between Montana and Oregon. It was not meant to be, however, as Zach would hang up the gloves for a final time and head back to Arizona.

Back home, Zach’s parents could see just how much their son was hurting underneath and after his 21st birthday, he had a failed attempt to take his own life.

If it was not for his close friend and former football teammate at Stanford, Christian McCaffery, Zach may have never learned the real source for all of his mental health issues. McCaffery, a running back drafted by the Carolina Panthers in 2017, was told about Zach’s condition and acted without hesitation.

“Christian McCaffrey saved my life,” Zach said in the podcast. “…he calls my dad and says ‘I’m going to fly him out here, he’s going to see Dr. Prusmack who’s the chief neurosurgeon for the Denver Broncos.’ I sit down with him for 15 minutes and he tells me I have Lyme Disease. My dopamine levels were zero. My testosterone levels were almost gone. My cortisol was through the roof.”

With the right diagnosis and the right medication, Zach was on his comeback trail. He began working locally, working with high school football teams in the Peoria and Phoenix area, including his old stomping ground, Centennial. This eventually led him to getting a coaching job with the University of Northern Colorado, coaching the safeties.

Then, COVID came. Like so many others across this country and around the world, Zach was furloughed due to the pandemic and forced to return to Arizona. Once again, the sleepless nights began. While his mental state never got down to where it was before, it was enough to keep him up night after night.

One night of sleep was all he wanted. That one percocet, meant to be his release, turned out to be his end. It was May 14, 2020.

Soon after, the Hoffpauirs sent Zach’s brain to Boston University for Chronic Traumatic Encephalopathy research where it was determined he had already progressed to stage two CTE.

That research will be valuable to future generations. So will his legacy at Centennial. 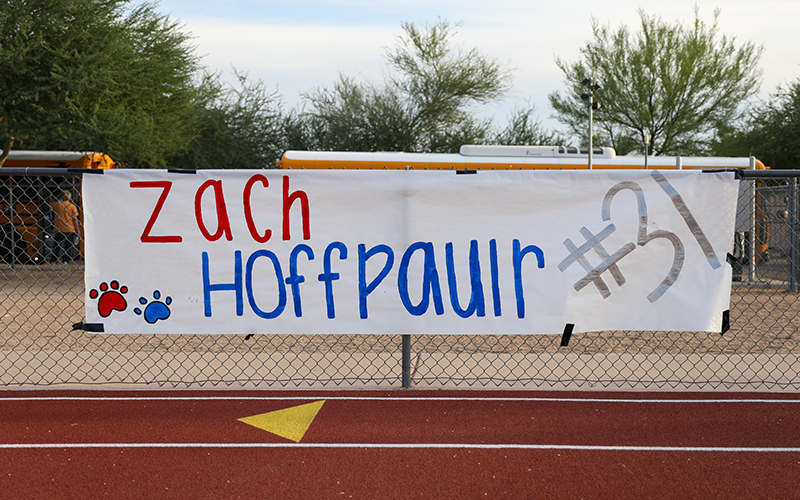 Hoffpauir was a multi-sport athlete at Centennial High School and excelled at a variety of sports, including football and basketball. (Photo by Mary Grace Grabill/Cronkite News)

“We remember things through stories, and we forget things when we take down the things that mean so much to us, we can’t tell those stories anymore. … I would hope that seeing (Zach’s) number, sharing those stories, keeping a record here on campus allows us the opportunity to not forget,” said Adam Larsen, the athletic director at Centennial.

At the Centennial event, Doug refused to let the pain of his family’s loss and the community’s loss bring down this night of celebration.

“It would’ve been great to see him here,” he said. “But I’m sure, you know, Zach’s looking down on us and know(s) that he’s been honored.” 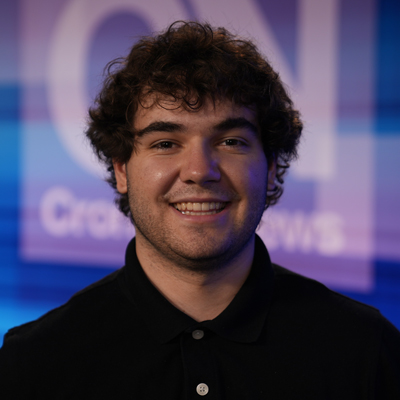