PHOENIX – Standing behind the bleachers at Ray Laimo Field, Quintin Conley fiddles nervously with his backpack. At 6-feet-3, the skinny wide receiver from Central High School casts a long shadow on the parched ground.

The junior and his teammates heard all the taunts and doubts leading up to their first game of the football season, a road meeting at North High. Central had not beaten its crosstown rival since 2012, and spirits were down at the school heading into last week’s season opener.

“A lot of people were saying ‘Oh y’all going to lose, y’all trash,’” Conley said. “No. They don’t know the amount of work we put in, so it felt really good for me and a couple of my other teammates to come back to school and say, ‘Yeah we did that.’”

They did, defeating North 26-20 Friday. The story of the game wasn’t the score, however, but two names, intertwined forever, that rarely leave the minds of Central’s players and coaches.

Quortez, Quintin’s 14-year-old brother, was fatally stabbed in May during a fight at a Valley Metro light rail stop. Simmons, the recently-graduated former captain of the team, died from a “horrible accident” in late July, as stated on the family’s Gofundme page.

“We’ve been through a lot this past year, and these past six months specifically. … Those deaths, that really hit home with a lot of our kids and all of our coaches,” Central coach Chandler Hovik said. “And so we knew that going into the season, it’s obviously a lot bigger than just us.”

“Everything we do is for those (two) guys.”

Central had hoped to do more Friday night but learned Thursday that its home opener against West Point was canceled after the Bobcats were placed on an eight-day COVID-19 quarantine.

Another setback in a challenging season. Conley, for example, continues to grapple with the pain of his loss.

“Emotional, tough, hard. Just … bad. These past couple months have just been bad, but me being here, it just like, it kind of helped,” Conley said. “Football has always been my outlet, no matter how I’m feeling. It is just something that makes me happy.”

Teammates and coaches spoke as well about how this sport and this “family” supported each other and the community.

“Football is family. Once you start making those bonds with people at your school, you have those bonds for life,” junior quarterback Dominik Bagchi said.

Offensive coordinator Matt Allen knows that as well as anyone and said that Simmons “was like a son to me, he lived with me, he helped me through the loss of my brother two years ago, who died by suicide.” 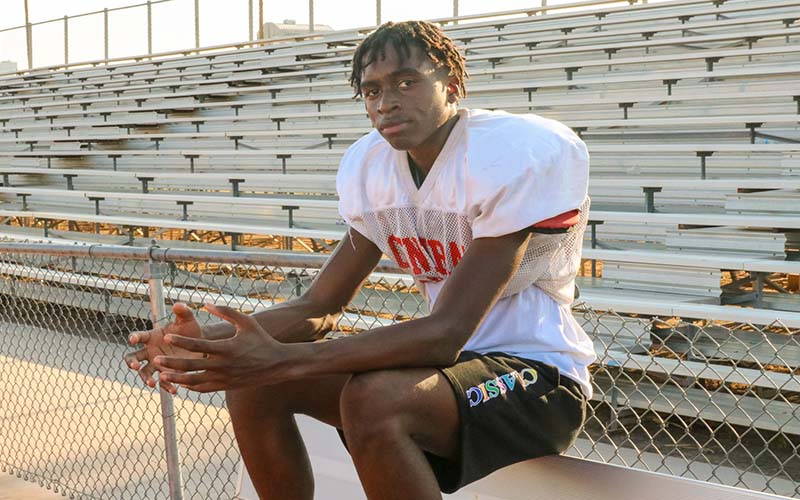 Quintin Conley has found that football can provide comfort. His brother, 14, was stabbed to death in May during a fight at a Valley Metro light rail stop. (Photo by James Franks/Cronkite News)

“But I have to come here every day, ’cause they are my therapy. They help me heal. … They help me remember every single day why I’m out here. This is our way to get away from the things in the world that suck and that hold you down, and that want you to just go into your hole and never come out.”

The team was inspired in Central’s opener. Senior wide receiver Carter Allen led the Bobcats with two touchdowns and 141 receiving yards. Bagchi threw for three touchdowns and 264 yards and scored a rushing touchdown as well.

Central dominated early, taking a 14-0 halftime lead. But North struck first in the second half as the Mustangs mounted their comeback. With the crowd, the momentum and the history behind North, everything pointed toward the home team eking out the win. But the visitors held on.

After the victory, the words of Hovik told an important story about the motivation for the Bobcats’ season.

“Really the only thing that I can think about right now is, you know the guys looking down on us, whom you guys did this for,” he said. “I know CorVel is happy as hell up there, and Quortez, and you guys made them proud.”

Although the players may not share bloodlines, the bonds forged on Central’s gridiron run deep.

“It’s still difficult to realize that someone that you saw, not even a few months ago, pass, and it’s someone you built that relationship with,” offensive lineman coach Juan Budda said. “But coming here, seeing these kids succeed, getting good grades, doing well in the field, it’s helped tremendously.” 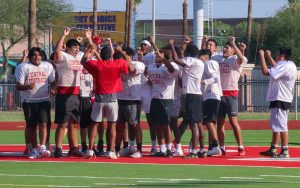 After starting the season with a victory over North High, the Bobcats’ next objective was to beat West Point, but the game was postponed because of COVID-19 protocols. (Photo by James Franks/Cronkite News)

Budda emphasized the word “helped,” and let the silence hang for a few seconds, before continuing.

The player’s growth and maturity can be seen in their approach towards the season.

“This season for us is dedicated to anyone who went out one day and didn’t make it home,” Bagchi said.

Through this shared traumatic experience, the team has learned life’s harshest lesson. But through this journey ahead, it will also learn one of life’s most valuable lessons.

Their focus on the season can be felt everywhere. It is in the air they breathe, it is in the words they yell, it is in the sweat they drip. They are fighting for something bigger than themselves.

They are fighting for family. 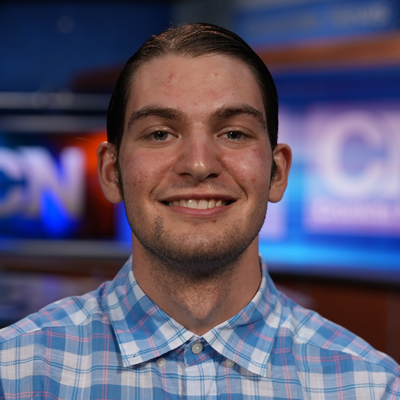 Evan Oscherwitz expects to graduate in December 2021 with a degree in sports journalism. Oscherwitz, who covers ASU hockey for WCSN in Ohio and high schools for Sports 360 AZ, is working in the Phoenix Sports Bureau.