Alex Carillo (left) and his brother, Tim, believe time management and discipline are the keys to success in MMA. (Photo courtesy of MMAStalker)

SCOTTSDALE – At first glance the mindset might seem unusual. There’s the electric diet, focused solely on the consumption of mucus-free fruits and vegetables. There’s the chill persona, stemming from a love of Jeet Kune Do – a style of martial arts inspired by Bruce Lee – and the connection to weapon-based martial arts.

It’s initially unclear why Alex and Tim Carrillo are fighters at all, given their wiry frames. But that helps explain the popularity of MMA: the unknown and unorthodox.

In the midst of the limitless expansion the MMA world has experienced over the last decade – from global awareness of the sport thanks to the UFC and other promotions, to MMA-specific gyms popping up in every town – two brothers out of Ahwatukee seem to value their roots more than ever these days.

“It’s more of like the nature vibe,” Alex Carrillo said, “especially adding that in and then with my persona, the High Vibe Shinobi, I like being within like the trees and the grass.”

It is mid-September and the brothers are at Chaparral Park, their playground, the arena where they show up with a handmade bo staff and a smile on their faces, eager to start their training for the day.

“We’re trying to really craft our specific skill, which is a mix between upper body wrestling and boxing,” Tim said.

Alex, 23, and Tim, 33, began wrestling at an early age, blossoming into Desert Vista High School athletes. Tim started his MMA training in 2018, bringing Alex along with him, which allowed the latter to be immersed in the sport.

“Yeah, we’ve always had similar mindsets with just what inspires us to do this,” Tim said. “And just kind of like the whole cartoon martial arts (aspect), kind of our theme really keeps us going and keeps us interested … supplementing our training with weapons and whatnot.”

For Alex, that mindset has become a staple in his career, helping him to his first victory at RUF 43 in August, when he earned a first-round TKO finish over Mark Courson.

“So because it was more play, it actually helped me a lot, because I didn’t think about any pressure behind it. Wrestling was a little bit more pressure,” Alex said. “But as far as the fighting, it wasn’t as much pressure. I was just more confident because I treated it more like play.”

That mindset also helped establish Alex’s fighting persona, High Vibe Shinobi, personifying who he wants to be in and out of the cage.

The name comes from the brothers’ love of the electric diet, a mucus-free diet that focuses on the consumption of fruits and vegetables, leading to more water energy and essentially higher vibrations. They combined that with their love of Jeet Kune Do to blossom into the fighters they are today.

“I’ve been doing the underground fights and a lot of people are becoming fans. They’ll call me the Ninja, the Shinobi, High Vibe Shinobi and they’re super into it,” Alex said. “So I am definitely trying to create a good fan base, especially to reach out to the kids more and stuff like that, to get them more involved.”

Alex also believes this persona of being true to himself is the main catalyst in connecting with fight fans.

“Not necessarily this persona where I’m out here trying to you know, cuss too much or act like I want to hurt people so bad this and that,” Alex said. “It’s more about the martial arts aspect and reaching into different crowds instead … especially because a lot of people have their styles but they stay away from MMA, say they want to just do karate or they want to just do judo and stuff like that, but I want to make it all connect.”

Don’t be fooled by the persona though, as the brothers take their work seriously. They travel between Arizona and Los Angeles monthly, training with UFC talent at Blackhouse and Brazilian Samurai MMA, but it’s the time they spend outside the gym that is the most valuable for them.

“I think we’re definitely very committed in training,” Alex said. “But it’s just within our own systems. I like to go test my skills in gyms rather than be in there and sit there. … Most of my learning is off on the side where I have more time to work on it versus trying to go in and get everything together within an hour or two hours.” 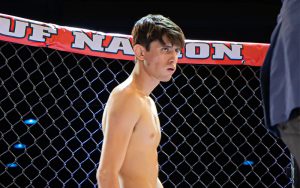 Alex is confident when he is competing, he said, because he treats it more like “play” than fighting. (Photo courtesy MMAStalker)

Even when the brothers aren’t physically together, they still manage to train together via FaceTime. A “normal” session often involves a little bag work, some jiu-jitsu and then an individualized lesson plan the other has helped prepare.

Their most recent fight camp was all about movement, especially for Alex, who focused mostly on his striking footwork. The movement before the strike, coined “pre buttons” by Alex, helped him get the knockout at RUF in September. Imagining a series of tiles on the octagon floor, Alex uses that to place his feet in certain positions, anticipating not only his opponents’ movements, but his own as well.

“The reason I call it a pre-button movement, we treat it like there’s buttons basically,” Alex said. “So there’s a button in the middle between the opponent, and then where your feet are supposed to be basically. And when you strike your foot, you’re supposed to land on this button, which we call it, and that’s where you’ll be able to strike down, so you’re kind of off the button until you land on it. And when you land on the button, that’s when you’re landing the strike. So we don’t want to step in the button to land the strike until we’ve worked on the pre-button.”

The brothers also spend countless hours going over film and modules they send to each other.

They’ll even teach a class just to get more work in, seizing every opportunity to get better at their craft.

“I’m like a nerd about it,” Alex said, grinning. “I’m basically trying to study it like a video game.”

They admit they spend every minute they can thinking about their fight careers while also struggling to get by, as many fighters carry part-time jobs. For Tim, it’s all about finding a balance between the two, as he has a 2-year-old son at home.

For work, Alex focuses on the food delivery services of Doordash and Grubhub for income.

“I think deliveries have really made it flexible for me to be able to travel back and forth to California,” he said. “I don’t think I would be able to do that if I had a normal job because I would have to take time off, I’d have to ask for things, I’d be stressed when I’m going to get my paycheck.”

Alex is looking to make his pro debut before the end of the year, while Tim is targeting RUF’s next event in October. 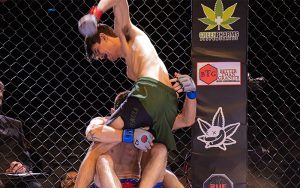 Alex welcomes another fight as soon as possible, and said he is looking to go pro in his next bout. (Photo courtesy MMAStalker)

“I don’t want to keep going amateur,” Alex said. “I haven’t even really been touched, I haven’t got punched one time throughout these past four fights. And I’ve gotten to finish every single fight. So I’m definitely prepared to go pro for sure.”

He may get his wish soon as Joel Lopez, RUF Nation’s CEO, came away impressed by Alex’s recent performance.

“This kid is legit,” said Lopez, who was sitting ringside at RUF 43 with former UFC middleweight Rich Franklin. “Matter of fact, I was telling Rich, I said, ‘You know, that kid doesn’t really look like a fighter. I don’t know, man, I kind of feel bad for him.’ And bam! As soon as I said that, I said, ‘You know what? I put my foot in my mouth. I’ll take (my words) back.’”

Lopez compared Alex’s appearance to that of a “computer geek” due to his rangy size of 5-feet-9 and 125 pounds, but Lopez understands that looks aren’t everything in the MMA world. “This doesn’t have the look of a mean-looking fighter. And then they come out and their inner warrior comes out, like they’re Incredible Hulk,” Lopez said. “And so to my surprise, he proved me wrong.”

An old Bruce Lee quote personifies the Carrillos: “Absorb what is useful, discard what is not, add what is uniquely your own.” The brothers try to live by those words. While others may question their unorthodox training methods and calm demeanors, they say they choose to embrace it, citing discipline and consistency as the main tools of their craft.

They also see the MMA mat like a chessboard, strategically planning each move before they make it, because despite outer appearances and laid-back personalities, this is their life. While others will get more of the spotlight, these two are perfectly content sitting back and honing their craft like the ninjas they personify inside the octagon.