Ellery Tarazon (left), an Arizona State product, will take on Cameron Chism in a co-main event bout at the Celebrity Theatre Sunday. (Image via YouTube)

PHOENIX – This time last year, life was different. COVID-19 was in full swing as athletes and businesses struggled to recover from the unforeseen circumstances that came with the pandemic. One of these businesses, Ringside Unified Fighting, better known as RUF Nation, struggled as Arizona’s Boxing & MMA Commission wouldn’t allow competitive fighting to resume in the state.

This time last year, Dr. Joel Lopez, president and founder of RUF, described COVID-19’s impact on local fighters and the way back to the cage in Arizona. He spoke about RUF’s protocols for combating the virus and a double standard occurring as the UFC had been allowed to continue its practice in Las Vegas.

Fast forward to the present day and the future has a much brighter outlook for RUF Nation.

RUF Nation has partnered with ONE Championship, a Singapore-based MMA organization, leading to Lopez and his team putting on five MMA events in the last six months, and local and former UFC fighters getting more exposure than ever before in the promotion.

And with the possibility of joining ONE, thanks to the ongoing Road to ONE tournament in place for RUF heavyweights, their chance on the biggest MMA stages in the world may be coming sooner rather than later. With that in mind, here are three fights to watch Sunday night at Celebrity Theatre. (Fights subject to change.) 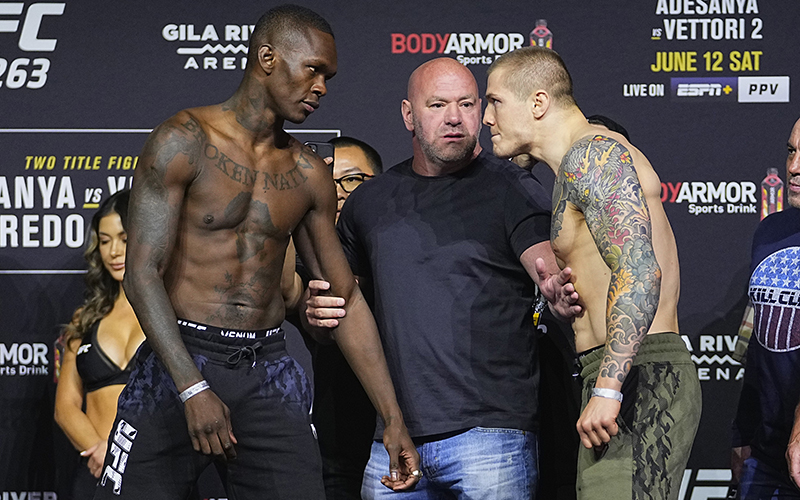 Coming off a first-round submission in his MMA debut in July, Arizonan fighter Cortes-Acosta is looking to make another statement in his first main event as he faces an MMA veteran and the No. 1 ranked heavyweight in California, Powell. Powell is on a two-fight win streak, having defeated Brandon Cash at RUF MMA 40 in April and is looking to continue his run in the Road to ONE tournament. Powell’s most notable fight was against UFC light heavyweight contender Dominick Reyes in 2017, when Powell was defeated in the first round. Look for the veteran to utilize both his striking and submission game against newcomer Cortes-Acosta, who will be facing his toughest test yet after taking the fight on short notice.

Off his first professional victory at RUF MMA 40, Rodriguez will look to capitalize on that momentum this weekend against Bollea. Even though Bollea has spent significant time away from the cage, having last fought professionally in 2012, “The Ultimate Male” hopes to take advantage of the younger Rodriguez and restart his MMA career Sunday. This fight should be a heated exchange as both fighters showed their true feelings towards one another at the weigh-ins on Saturday, potentially setting up a fight of the night scenario at Celebrity Theatre.

The co-main event has the potential to be a standout bout as Chism will face off against Tarazon in the Road to ONE quarterfinals. Chism, known as “Dark Shark,” is looking to get back in the win column after losing his last few fights in other promotions. He’ll meet Tarazon, an Arizona State alum, who’s looking to improve on his only professional fight in 2014, where he was defeated via TKO. Both heavyweights are as hungry as ever to advance onto the semifinals and earn that ONE Championship contract so expect to see heavy punches flying early and often in this bout.