At the heart of the scenic area lies Scottsdale Stadium, the epicenter of Scottsdale’s baseball past and present. Originally constructed in 1956, Scottsdale Stadium’s current iteration opened in 1991 and is the spring training home of the San Francisco Giants.

And in August the Pac-12 Conference announced that the stadium and Old Town will play host to the inaugural Pac-12 Baseball Tournament May 25-29 as part of a contract that runs through 2024.

The partnership with the Pac-12 is the work of three Arizona entities: Experience Scottsdale, the City of Scottsdale and the Arizona Sports & Entertainment Commission, and the result is a major collegiate sporting event that will draw fans from across the west to Old Town.

“We all have different roles and capacities in this, but it took a village to make it happen,” said Nikki Balich, executive director of the Arizona Sports & Entertainment Commission. “You can’t just say it was one person. So many people came together for the good of the state and for the good of Scottsdale.”

The top eight teams in the Pac-12 standings at the conclusion of the regular season will earn a berth in the double-elimination tournament and the champion receives the Pac-12’s automatic bid to the NCAA Division I Championship tournament, which culminates in the College World Series in Omaha, Nebraska.

Participating teams will play on grounds that have previously served as the spring training home of the Baltimore Orioles, Boston Red Sox, Chicago Cubs and Oakland Athletics before the Giants moved into the stadium in 1984.

The NBA great was assigned to the Scorpions when he took a two-year hiatus from basketball to pursue his childhood dream of playing big league baseball. Jordan ultimately couldn’t handle a curveball, but it turned out that Scottsdale could.

Substantial talks between the Pac-12 and the City of Scottsdale began in 2019 when the city responded to an RFI – a request for information – sent out by the conference. The hope was to hold the Pac-12 tournament as early as 2020. The Pac-12 is one of the last leagues in the country to hold a conference tournament.

“It’s their inaugural tournament, so that was very exciting,” said Erika Pumphrey, senior national sales manager of Experience Scottsdale. “They conducted site visits in February of 2020 with the hope that we would maybe move forward, whether it be 2020 or 2021.”

Then the pandemic hit.

“The intention was to have this all come to fruition a lot sooner, but we all had to react and kind of pivot and change the way that we approach things,” said Scottsdale Stadium Supervisor Stephanie Tippett.

As the pandemic unfolded, the Arizona Sports & Entertainment Commission shifted its focus. It decided to utilize funds received from the government to help others throughout 2020 and provided 10,000 COVID-19 tests, which were conducted weekly.

The commission also brought the men’s and women’s basketball programs from San Jose State and New Mexico State to the Valley to play in a temporary “bubble” because of restrictions in California and New Mexico.

“During this whole time, we have talked to the Pac-12, but it sort of went by the wayside because COVID was happening,” Balich said. “While we were doing that stuff, Erika Pumphrey from Experience Scottsdale called me and said, ‘Hey, I just got off the phone with Pac-12. I understand you were talking to them too, and we’re going to pursue this in Scottsdale.’

“She worked on it, then it went by the wayside again because we’re still in COVID. And then all of a sudden it just happened.”

Now, the Pac-12 Baseball Tournament will be added to the list of the city’s history of big sporting events.

Scottsdale has been home to the Waste Management Phoenix Open since 1987. Grayhawk Golf Club in Scottsdale recently served as site of the NCAA Division I Golf Championships and is scheduled to play host to the event through 2023. And the Giants annually pack Cactus League fans into Scottsdale Stadium during spring training.

“We’ve had a stadium here on this property since the 1960s when the Cactus League was really becoming something big in Arizona,” Tippett said. “We’ve been a part of Major League Baseball and other baseball tournaments ever since, so I think that we’re a natural fit when it comes to hosting baseball events.”

On top of watching championship baseball at the stadium, fans will have ease of access to everything the city has to offer. Many of Old Town’s amenities are a short walk or trolley ride away. 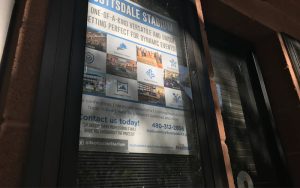 Scottsdale Stadium hosts several baseball events throughout the year, including the Arizona Fall League and the Cactus League. The stadium has served as the Spring Training home of the San Francisco Giants since 1984. (Photo by Ian Garcia/Cronkite News)

“We’re urban,” Tippett said. “We fit right into Old Town Scottsdale. You can go to restaurants or art galleries or go down to the entertainment district, and we have a lot of hotel properties nearby. It’s an easy fit for those who want to travel in for the baseball tournament to kind of be all in one place and not have to go very far to enjoy things.”

Scottsdale isn’t the only Valley city that is playing host to a championship baseball event.

The Western Athletic Conference plays its conference championship tournament at Mesa’s Hohokam Stadium, the spring training home of the Oakland Athletics. Those involved in bringing the Pac-12 tournament to Scottsdale hope to create “Championship May” for college baseball fans.

“It is vitally important to have people like the Pac-12 in our state because it attracts other organizations to come in,” Balich said. “If the Pac-12 trusts us, other people can trust us.”

For now, the Pac-12 Baseball Tournament will bring that traffic to Scottsdale Stadium and help those working at the facility.

“You will see a typical dip in event-related activity as you go into May,” Tippett said. “It’s really important to drive additional traffic into the facility so that those folks can stay working, and that’s everywhere from our cleaning staff to our food and beverage providers to the vendors that will be on site. It just keeps them working throughout the year with more consistent work.”

As a result, the city’s economy as a whole will see a boost after what has been a difficult couple of years due to COVID-19.

“It’s very attractive for the hotels, especially now through the pandemic, to be able to recharge and recreate some areas of opportunity within tourism,” Pumphrey said. “Not just through jobs but also overall economic impact – from the restaurants, from some of the art galleries, some of the golf and the spas that may have been impacted by COVID. We’re elated in the fact that we’re able to not only bring jobs but just some economic impact to the destination.”

It was a collaborative effort between the three Arizona entities, and it could be the start of a long-term relationship with the Pac-12.

“We hope that once they come here, we’re able to execute the event to their standards and above what they’re hoping to expect not only for their players and the Pac-12 but their fans and create an annual event that stays in Scottsdale,” Pumphrey said. “That’s our overall goal: to welcome people to what Scottsdale is able to do and showcase for these types of events and create long-lasting partnerships.”

According to Pumphrey, if all goes according to plan, the Pac-12 Baseball Tournament will put a nationwide spotlight on Scottsdale the same way that the Fiesta Bowl football game does for Arizona.

In the end, while fans can look forward to championship baseball and high-level hospitality, the city and the commission look forward to bringing an overall positive impact to Old Town Scottsdale.

“I love helping people,” Balich said. “It just makes me happy. That’s how important this is. We’ve had such a hard two years, but this is going to be awesome.”