Bisbee, located just 11 miles north of the Mexican border, was founded as a gold, silver and copper mining town in 1880. (Photo by Education Images/Universal Images Group via Getty Images) 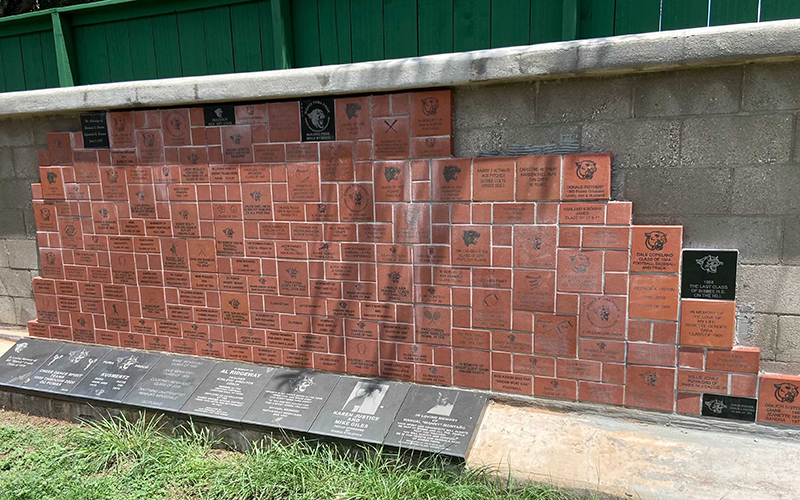 The brick wall features names of local legends who played at Warren Ballpark. Russ Kusmertz and Annie Henry, among many others, have their names etched into this wall next to the entrance of the park. (Photo by Abby Sharpe/Cronkite News)

BISBEE – The drive along Arizona State Route 80 is lush and green with salt cedar trees dotting the sides of the road.

The highway splits the Mule Mountains. On the other side of the Mule Pass Tunnel lies a small town – one that really doesn’t look as if it belongs in Arizona.

Buildings and homes sit up alongside the mountain, reminiscent of a European coastline. The speed limit slows and another European feature, the traffic roundabout, sends traffic toward Naco, further toward New Mexico on SR 80 or onto Bisbee Road and into the residential street. On the right sits Warren Ballpark.

Sports are a lifeline in Bisbee. The connection extends back to the early 1900s when Warren Ballpark, an expansive field where dead center is 444 feet from home plate, was built.

The Chicago White Sox have a unique connection to the ballpark in southern Arizona.

It was 100 years ago this month that eight White Sox players – who had been accused of conspiring with gamblers to throw the 1919 World Series against the Cincinnati Reds in the infamous “Black Sox” scandal – were found not guilty of conspiracy.

Despite the trial’s outcome, federal judge Kenesaw Mountain Landis, who had been hired by baseball to investigate the matter and was subsequently named the sport’s first commissioner, banned all eight players from organized baseball for life just one day after the trial ended in their acquittal.

Chick Gandil, Eddie Cicotte, Lefty Williams, Shoeless Joe Jackson, Happy Felsch, Swede Risberg, Buck Weaver and Fred McMullin were all left without a baseball job, but that did not last long for Weaver, Gandil and Williams.

All three signed with a team in Douglas, a small town just east of Bisbee along SR 80, which played in the “outlaw” Copper League. Along with Bisbee and Douglas, there were teams in Fort Bayard and Santa Rita, New Mexico and clubs in El Paso, Texas and Juarez, Chihuahua, located across the U.S.-Mexico border from El Paso.

The Black Sox castoffs played at Warren Ballpark between 1925 and 1927, showcasing their talents with the Douglas Blues along with former White Sox first baseman Hal Chase, nicknamed the “Black Prince of Baseball” because of his many gambling issues.

A mining town for much of the 20th century, Bisbee burst at the seams in the early 1900s. Warren Ballpark was the centerpiece of a new development that was connected to the older areas of Bisbee by a trolley system.

Calumet & Arizona Mining Co. built the original grandstand at the ballpark in 1909 for $3,600, according to Warren Ballpark historian Mike Anderson. 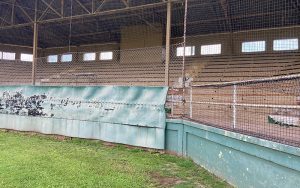 The grandstand at Warren Ballpark was built out of raw adobe by the Works Progress Administration in 1936. (Photo by Abby Sharpe/Cronkite News)

“One of the remarkable things about this ballpark is its architecture,” Anderson said as he provided a tour of the basement below the grandstand. “In the winter of 1936-37, the (Works Progress Administration) tore down the old grandstand and built this out of raw adobe.”

The Copper League, and the former professional players who played in it, provided people in the southwestern U.S. a glimpse of the talent that existed in the National and American leagues, at a time when the western-most major league team was in St. Louis.

“When else could you have seen major league talent? There’s no TV. There’s barely pictures in the newspapers. Occasionally, you might see a newsreel if you go to the movie theater,” said Jacob Pomrenke, the Director of Editorial Content for the Society for American Baseball Research, an organization bringing baseball research to fans. “Then all of a sudden high-caliber players ended up (in Arizona). You can go to Warren Ballpark and see guys that used to play in the World Series for the Chicago White Sox or the New York Giants or whoever.

“That’s incredible. That must have blown people’s minds.”

It did enamor the residents of Bisbee, enough to keep the park filled. But the banned Black Sox weren’t the only famous – or infamous – baseball players to step on the field at Warren Ballpark.

Anderson rattles off names of local legends. There’s Russ Kusmertz, who pulled off an unassisted triple play. Kusmertz played with pitcher Don Larsen, who threw a perfect game for the Yankees in the 1956 World Series, the first perfect game in a postseason game.

All the stars weren’t men, either. Bisbee native Annie Henry averaged .762 in 20 games before she signed to play girls’ baseball professionally for the Rockford Peaches — one of the All-American Girls Professional Baseball League teams that inspired the 1992 film “A League of Their Own” — after World War II. Fellow Bisbee native Betty Bays joined the same professional league in the early 1950s.

There are many more stories of talented athletes who played at Warren Ballpark. Their names are etched in a brick wall right beside the entrance. 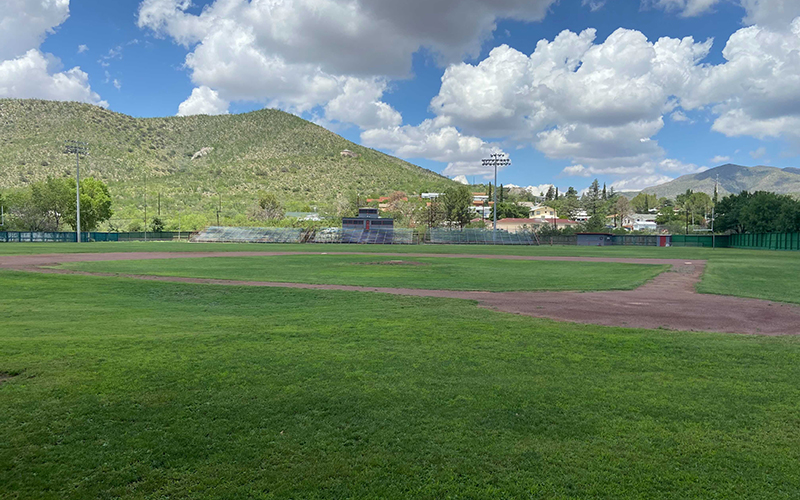 For over 100 years, athletes spanning from high school to members of the Black Sox played on the historic field. (Photo by Abby Sharpe/Cronkite News)

The love of baseball – and football, basketball, softball and soccer, to name a few – runs deep through the town.

The Bisbee High School football teams’ rivalry with nearby Douglas High is the second-longest rivalry in the country. The teams met for the 150th time in 2019, and Bisbee took home the Copper Pick — the high school version of the Territorial Cup. The Covid-19 pandemic disrupted the 151st meeting, but the two will meet again this season in Douglas.

Bisbee High’s girls basketball team put together back-to-back seasons with 20 wins or more over its last two seasons (the team didn’t play in 2020).

The Warren District Country Club opened a nine-hole golf course in 1908. The course was moved by the Works Progress Administration to Naco in 1936, and became known as the Turquoise Valley Golf Course. It was said to be the oldest continuously operated course in the state until it closed in 2019.

To Anderson, sports have a special place in small communities like Bisbee.

“It still means a lot. To us, it means a whole lot. We’re vociferous supporters of sports,” Anderson said. “We’ll be down here — it may be 40 degrees, but we’ll be bundled up and watching them play. Not only does it support the team, but these kids, they go all out. They take it seriously.”

There are about 330 students enrolled at Bisbee High. Almost one-third participate in a sport of some kind.

Many of the students – about 70%, to be exact – are classified as low income. Bisbee survives as a tourist town, and the “families are not flushed” with money, as Anderson put it. But sports provide value for every student.

“For some of them, who are challenged by school or just not excited by academics, it gives them a reason to stay in. The other thing is that they listen to these (mentors), who are another source of guidance and inspiration in their lives,” Anderson said. “The band of brotherhood or sisterhood that you get on an athletic team, that’s something that you don’t get anywhere else in life. You may never get it again.”

Warren Ballpark is a staple in Bisbee, and will continue to be. It has a pull on residents unlike other stadiums in other towns.

Mike Frosco, a recently retired coach and former athletic director at Bisbee High, paraphrased a quote recalled by many baseball fans during MLB’s “Field of Dreams” game a few weeks ago.