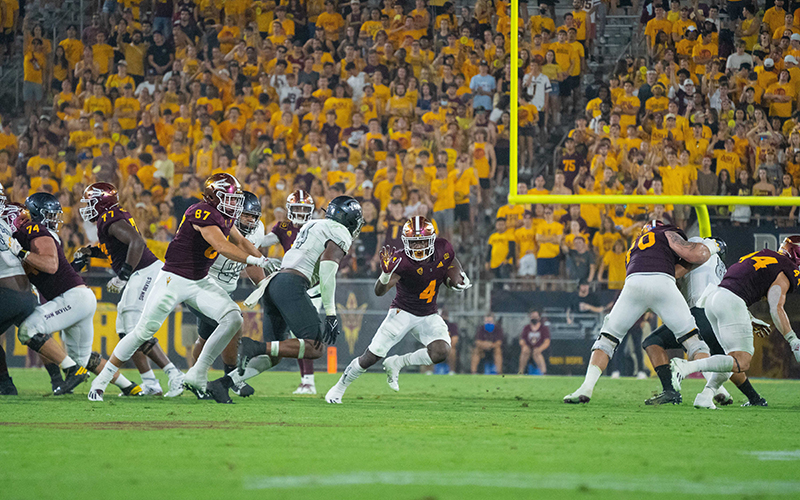 Arizona State running back Daniyel Ngata had six carries against UNLV Saturday but averaged 10.7 yards on those carries. He is symbolic of an offense that is finding production from its running game. (Photo by Julian Rosa/Cronkite News)

PHOENIX – The Pac-12 has taken on a new, smash-mouth football identity early this season and Arizona State is leading the charge.

The Sun Devils lead the Pac-12 in rushing after piling up 290 yards on the ground against UNLV in a 37-10 victory that improved ASU’s record to 2-0 and helped them move up to No. 19 in the Associated Press Top 25.

Meanwhile the Pac-12’s top three passing teams – Oregon State, Arizona and Washington – are a combined 1-5 so far this season.

“Football is a game where we love passing, and we love scoring, but if you look at the teams that win. The teams that go to the playoffs … watch how they run the ball,” said Arizona State coach Herm Edwards. “The good teams find a way to run the ball.”

Under Edwards, the Sun Devils are 10-1 when they rush for over 200 yards, but they aren’t the only team in the usually pass-happy Pac-12 that has turned to the ground game.

UCLA, which ranks third in the league in rushing yards, is ranked 13th nationally with a 2-0 record that includes an eye-popping 38-27 victory over Louisiana State. The Bruins piled up 260 rushing yards in that victory. 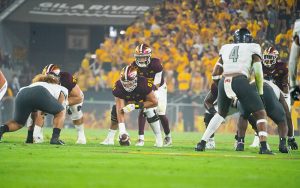 For ASU’s running game to succeed, it will need to continue receiving strong performances from its offensive line. (Photo by Julian Rosa/Cronkite News)

In their absence, quarterback Jayden Daniels stretched his legs and led a big ASU second half as the Sun Devils pulled away. The third of ASU’s trio of running backs, Rachaad White, added 90 yards and a pair of touchdowns.

“They played us really well in the first half in the passing game, especially down the field,” Daniels said. “That’s why I used my legs to hurt them.”

Daniels ran for 122 of the team’s 290 rushing yards. He also threw for 175 yards and a pair of touchdowns. He hasn’t needed to use his legs much to beat teams in his career. This was only the second time in his career that he rushed for over 100 yards.

“As long as we can stay on the field and as long as I can help the team win, I’m going to do whatever it takes.”

ASU’s defense also elevated its play in the second half, racking up four of its five sacks while holding the UNLV offense to just 14 yards.

“I think we were doing what we were supposed to the entire game,” defensive back Chase Lucas said. “UNLV’s quarterback was finding lanes to scramble, but after halftime, we talked to one another and said we were going to set up a spy on the quarterback, which worked in our favor to get the pressure that we needed to give our offense the ball. We did a great job in the end, but we have to start better defensively.”

On Saturday, the Sun Devils will face their first opponent ranked in the Top 25 when they play Brigham Young in Provo, Utah.

One of the focuses going into this game for the Sun Devils will be starting the game fast and finding an early rhythm on offense.

Edwards said, on the road, the offense will need to move the ball. He said it doesn’t necessarily have to score every time down the field, but converting third downs will help quiet the crowd.

With an inexperienced receiving core, sometimes it has been a challenge getting receivers and Daniels’ in sync. Edwards believes the chemistry will improve as the season goes on.

In the meantime, the Sun Devils running attack has more than carried the load.