ASU football coach Herm Edwards knows success this season will hinge on the performance of his defense. (Photo by Julian Rosa/Cronkite News)

PHOENIX – Arizona State coach Herm Edwards is known for his defensive expertise. Now, in his fourth season at the helm of the program, the Sun Devils are poised to make an impact in the Pac-12.

Since October of 2019, the Sun Devils, who play UNLV Saturday, have forced 38 turnovers. That puts ASU fifth in the FBS during that time period behind Clemson (47) and Baylor (45). Alabama and Cincinnati are tied at 42, according to according to statsperform.com.

Due to last year’s shortened season, the Sun Devils have played the least amount of games in comparison to the teams above them.

Additionally, when looking at the most takeaways among FBS teams in the last 12 games, the Sun Devils have the No. 1 spot with 38, ahead of Iowa’s 29.

Ten of the 38 turnovers came against opponents who were ranked in the Top 25.

In 2020, the defense didn’t perform up to par in their four performances. They could because of the peculiar season playing during COVID.

Leading the conference in fewest yards per game after Week One, the Sun Devils will look to build on their strength: defense.

The Sun Devils secondary is one of the most experienced in the nation with a combined 127 starts within the group.

Defensive coordinator Antonio Pierce said it’s good that he is able to get some reps, because as they move further along in the season, it’s a case of “we are going to need all hands on deck.”

“A guy that has transitioned from corner, nickel, to come back to corner,” Pierce said. “He brings a lot of versatility for us. Obviously as we get healthier that’s better for us. That’s more depth.” 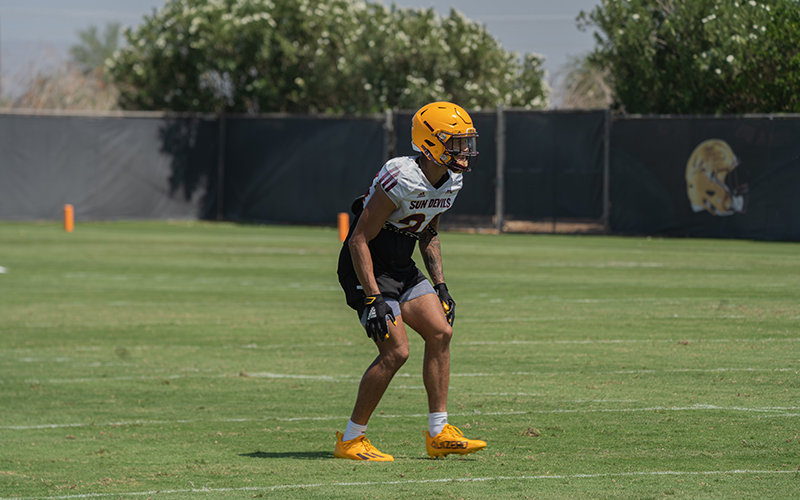 ASU cornerback Chase Lucas is one of the Pac-12’s most seasoned defensive backs and is back for a fifth season. (Photo by Julian Rosa/Cronkite News)

Butler and Soelle are two of the three defensive captains and Merlin Robertson is another weapon. He was listed on the preseason Butkus Award watch list.

“You can feel his energy, synergy when he walks in the room. He is a pit bull on a leash that doesn’t bark, he just attacks,” Pierce said about Butler. “He pretty much showcased what he did this offseason. Changed his body. A three down linebacker, and probably one of the most versatile athletic linebackers that we have.”

Pierce said that when those three players are locked in, the Sun Devils defense is a better unit.

Davidson was named Pac-12 Defensive Player of the Week after a standout performance against Southern Utah. 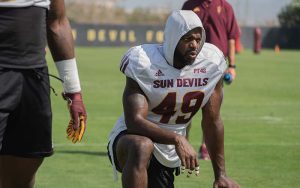 “Everyone misses Jermayne and we wish him all the best in his recovery,” Matus said, “but I really think it’s a chance for the younger guys to step up. … I think it’s good to get these other guys a chance to show what they’re made of.”

ASU is facing a UNLV team that racked up 199 yards rushing in its first game.

Williams would be the first test for the ASU defense this season. In 2019, Williams rushed for over 1,200 yards and 11 touchdowns and averaged almost six yards per carry.

Pierce said he believes the ASU defense will continue to clean up its mental errors and execute better as it progresses through the season.

In three of the last five years, the Pac-12 champion’s defense finished in one of the top two spots in yards per game or points per game allowed.

If the defense is the strength of this team, then this could be the year the Sun Devils win their first Pac-12 title under Edwards.