This will be a college season like no other for Herm Edwards. The Arizona State football coach has a Top 25 team but also one playing under a cloud of NCAA scrutiny. (Photo by Julian Rosa/Cronkite News)

PHOENIX — An NCAA investigation. A Top 25 ranking after playing just four games in 2020. The uncertainty of what might come in another year of pandemic football.

If that sounds like a heavy load for the Arizona State football team as it kicks off its highly anticipated season tonight at Sun Devil Stadium against Southern Utah, think again. After a year that felt so silent, there will be boisterous fans in the stands, and marching bands, and tailgate parties and the blessed sound of pads crashing against pads.

“Last year was just so different going out there playing games in empty stadiums, you lack the energy and lack the vibe,” offensive coordinator Zak Hill said. “As a coach or player, you crave that, and that’s part of what you do it for, is the game day feel … It will be really nice getting back to a stadium with fans.” 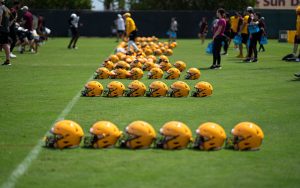 On Monday, Edwards was asked about his excitement to be on the field coaching a game after dealing with, as a reporter put it, “All the stuff that has happened off the field.”

The ASU football program is under investigation by the NCAA for possible recruiting violations. The team is accused of hosting recruits during the recruitment “dead period,” the duration of the pandemic when schools weren’t allowed to host recruits on campus.

“We haven’t really had a lot of stuff off the field, to be honest. … We want to play football just like everybody else does,” Edwards said. “From last spring to right now, we’ve been talking about football.”

So far, ASU has put three coaches on administrative leave as a result of the ongoing investigation.

The Sun Devils have also had injuries to a couple of key players to start the season. Jermayne Lole, a defensive lineman who’s a preseason All-American, is out for the season with a torn triceps.

Edwards also announced that transfer Triston Miller, who was a potential starter on the offensive line for the Sun Devils, is contemplating retirement.

The Sun Devils are looking to build off a shortened 2020 season where they played only four games because of the pandemic. Their offense finished in the top two of the Pac-12 conference for rushing yards per game.

Edwards said this year’s team will have a balanced offensive play style and make good use of their talented backfield. “We have three really good players that can run, so we got to give them the ball,” Edwards said. 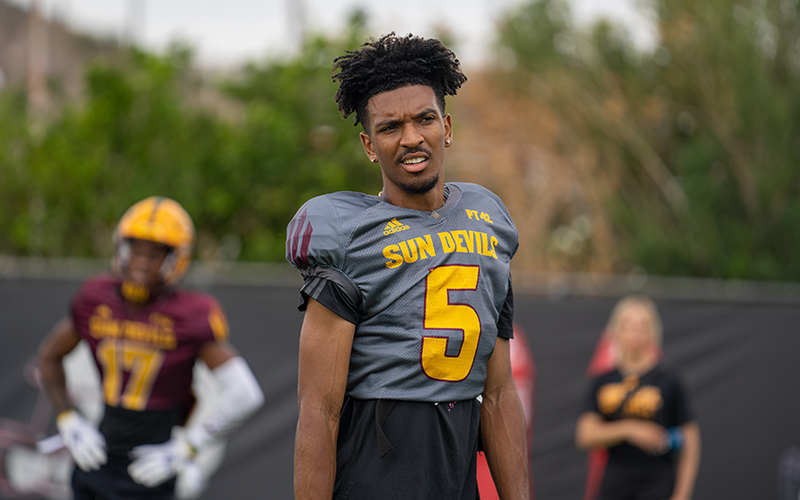 The 2021 season will be a defining one for quarterback Jayden Daniels, who is a possible NFL draft pick. In ASU’s shortened 2020 schedule, he connected on 49 of 84 passes. for 701 yards and five touchdowns. (Photo by Julian Rosa/Cronkite News)

Redshirt senior running back Rachaad White had an impressive campaign for ASU last year in his four games. He rushed for 423 yards and averaged 10 yards per carry.

This running back group consistently pushes each other to get better, White said. When asked about splitting touches with the other running backs, White said his mentality is, “If one eats, we all eat.”

White said he does have some individual goals he wants to accomplish this season, but his main focus is doing whatever he needs to do to help the team win.

With another year of working together under their belts, Hill and junior quarterback Jayden Daniels look to show a little more productivity in the passing game this year.

“He understands what we are trying to do as an offense, I can utilize some of the information that he sees or what he feels comfortable with, and I feel like there is a more open dialogue right now, which is a great thing,” Hill said.

This year’s secondary is the position group with the most experience on the Sun Devil’s defense.

The secondary has a combined total of 123 starts, which ranks it second nationally behind Indiana.

Keep an eye out for Chase Lucas, the ASU cornerback who was named preseason All-Conference and is the highest-ranked returning corner by Pro Football Focus in the Pac-12.

For the season’s first few weeks, Edwards emphasized the importance of stopping the run and tackling on defense.

For the Sun Devils, stopping the run becomes a bit more of a challenge when one of the best interior linemen in college football, Jermayne Lole, is injured.

“I’ve always said this even in pro football. Tackling is not very good the first four weeks because of the way you practice. In pro football, you don’t have as many players.” Edwards said. “Even in college football, we don’t have enough players where we can have tackling live all the time.”

The rationality behind the decrease of live tackling in practice through the years is to protect the players from injuries.

Southern Utah is looking to bounce back from a 45-14 loss to San Jose State last week.

“They’ll come in here obviously with a chip on their shoulder, not playing up to their potential obviously the first game, and now they have to come here and play us,” Edwards said.

The Sun Devils will be at home again next week when they face UNLV next Saturday at 7:30 p.m.