Could access to sports gambling in Arizona lead to increased addiction? That’s the concern by some now that Gov. Doug Ducey has signed a bill that allows a significant expansion of gambling, including sports betting. (Photo by Ethan Miller/Getty Images)

PHOENIX – The ability to attend a sporting event, place a bet on a team and possibly return home a winner will soon be a reality in Arizona.

So, too, could an uptick in gambling addiction, some worry.

Excitement surrounded Gov. Doug Ducey’s decision to sign a bill on April 15 that allows a significant expansion of gambling, including sports betting under licenses issued to tribes and professional sports teams. Gambling on fantasy sports and Keno games at horse race tracks will also be permitted.

But will accessibility increase detrimental behavior?

“Each state needs to take some responsibility and understand that a lot of people don’t gamble socially or don’t gamble like a normal person,” said a recovering gambling addict from Arizona who chose to remain anonymous.

Nearly 2.6% of the U.S. population, almost 10 million people, have an addiction problem because of gambling, according to the North American Foundation for Gambling Addiction Help. In WalletHub’s recent survey of “most gambling addicted states,” Arizona ranked 41st, a number possibly impacted by the state’s newness to expanded gambling opportunities.

“I know it’s a revenue-making … function for the state but if they’re going to have places where you physically go and gamble like sportsbooks, they need to put right on the front door and visible that if you have a gambling problem, you need to call 1-800,” the recovering addict said, “because this is just going to open up a whole new can of worms for people, especially in today’s world with so many different stressors, so many different pressures on people whether economic, social, marriages, everything.”

Arizona does have a support system for gambling addicts and will further increase its efforts to help combat problem gambling in the state, said Max Hartgraves, the public information officer for the Arizona Department of Gaming 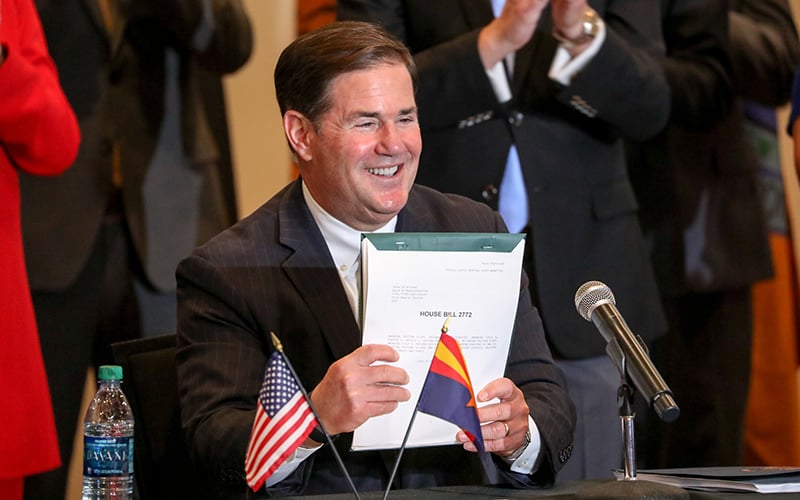 When Ducey displayed historic House Bill 2772 on April 15, he had members of several tribes seating by him. (Photo by Alina Nelson/Cronkite News)

The ADG’s Division of Problem Gambling (DPG) partners with individuals, agencies and community groups to promote education and prevention of problem gambling. The DPG also subsidizes treatment for anyone with a gambling problem and has a self-exclusion list that allows people to ban themselves from certain gaming facilities. The list prevents these people from collecting winnings or recovering losses.

“In this newly passed legislation, operators of event wagering and daily fantasy sports are required to develop a procedure to inform participants who have a problem with gambling that help is available,” Hartgraves said via email. “Operators are also required to allow problem gamblers to voluntarily exclude themselves from these games statewide.

“Additionally, operators are prohibited from paying out any prize or award to a person on this self-exclusion list, and any prize or award won by such a person shall be forfeited and donated to ADG’s Division of Problem Gambling. Lastly, operators are required to develop and maintain a program to mitigate and curtail compulsive play by promoting responsible gambling measures. We will encourage operators to utilize the professionals and services already in place through DPG to meet this requirement.”

The passage of the Arizona legislation was tied to an updated gaming compact Ducey struck with tribes and is expected to generate significant revenue. In Colorado, in its inaugural year of legalized sports gambling, sportsbooks took in over $300 million in wagers in March.

The new Arizona agreement would provide tribes with 10 licenses and allow them to run sportsbooks at tribal casinos. Online gambling sites can also benefit from the deal and already DraftKings announced a partnership with the PGA Tour which will include a sportsbook at the TPC Scottsdale, home of the Waste Management Phoenix Open. The Phoenix Suns and FanDuel also have announced a similar deal.

The licenses could bring in at least $100 million in revenue for the general fund, said state representative Jeff Weninger, R-Chandler.

“I truly think it’s going to help drive conferences here,” Wenninger said. “When you’re going down the checklist of us versus someone else and all the beautiful and great attributes we already have and then you add that element to it, I think it will fuel that. And then I think it really fuels the mega events. The day before the signing of the bill, you already had PGA announcing that they were going to have a sportsbook built at the Phoenix Open the year of the Super Bowl.”

The recovering gambling addict understands the revenue stream House Bill 2772 brings to Arizona but believes gambling venues at sports events “would be extremely harmful. And I would have zero interest. I wouldn’t go to a game because the last thing I need to do is go and enjoy a baseball game and also pass a sportsbook or be active at my seat betting on games. I don’t need any of that. That’s all detrimental to my health, detrimental to a gambling addict.” 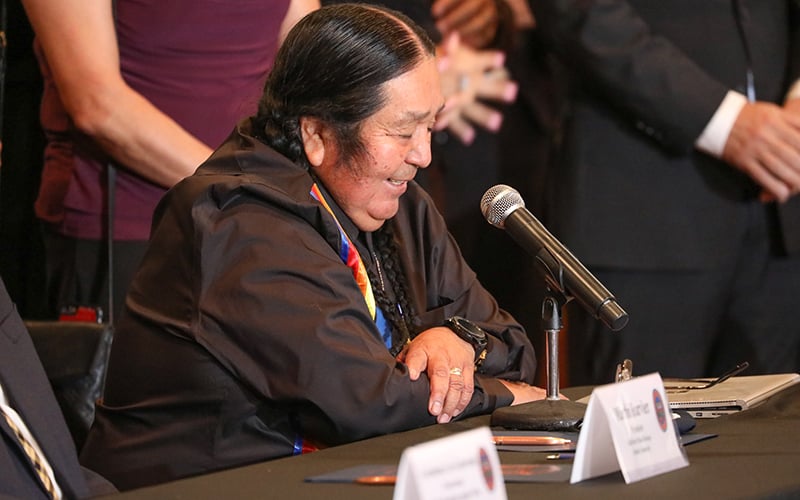 Weninger does not believe sportsbooks in stadiums would be a major trigger because he does not think they would be “in your face” such as a 50/50 raffle ticket sale.

“If you’ve ever been there and they have those raffles going on and there’s like 10 people standing in the hallways saying, ‘Hey, you want to get on the raffle,’” he said. “I don’t think it’s going to be anything like that. … And I understand and sympathize with the plight but at the same time, they sell alcohol at games and you could have somebody who’s been fighting addiction on alcohol. And you’re going to run into those situations in everything under the sun.”

Rick Benson, founder of the Algamus Gambling Recovery Center in Prescott, said if ESPN and other major sports networks continue to air gambling-related content, they need to also provide support for the fight against problem gambling.

“To be using the National Council on Problem Gambling hotline number I think would certainly be a good idea,” Benson said. “There is a national council hotline number. It then tracks into any given state in the country based on the area code that the call came in from.”

As sports gambling nears its arrival in Arizona, attention on the decision is coming from a variety of places.