Robert Schon, an associate professor of archaeology at the University of Arizona, leads the archeological dig, which includes both high school and college students. He said he started the project to establish a better picture of what the local economy looked like during the early 1900s.

“You sort of equate going to the ballpark with drinking beers and that sort of thing, but in Bisbee, that’s less of the case. (Baseball) was a little more temperate or a family-oriented activity,” Schon said. “We’re kind of debunking the myth of the Wild West.”

The Calumet Mining Co. originally constructed Warren Ballpark in 1909 as a recreational area for the company’s miners and their families, according to The Arizona Experience. The Bisbee Unified School District now owns the ballpark and uses it regularly for local high school football and baseball games.

Most historians have focused on the famous baseball players who took the field since its opening.

Before the students arrive at the Warren Ballpark in Bisbee, Robert Schon begins the meticulous task of recording the site’s measurements. (Photo by Maddy Ryan/Cronkite News)

Students excavate various sites around the Warren Ballpark in Bisbee to get a better understanding of the fans who had “the good seats” at previous games. (Photo by Maddy Ryan/Cronkite News)

Tammy Mitchell, a Cochise College student, sifts through the dirt excavated by her peers at Warren Ballpark in Bisbee. (Photo by Maddy Ryan/Cronkite News)

Students discovered firearm cartridges, which were thought to have been shot off in a celebratory fashion, at the archaeological dig at Warren Ballpark in Bisbee. (Photo by Maddy Ryan/Cronkite News)

Robert Schon, propietor of the archaeological dig at Warren Ballpark in Bisbee, provides all the tools for students to properly excavate artifacts at the ballpark. (Photo by Maddy Ryan/Cronkite News)

The residents of Bisbee still use the historic Warren Ballpark, which was constructed in 1909. (Photo by Maddy Ryan/Cronkite News)

According to Friends of Warren Ballpark, the ballpark has hosted a myriad of notable baseball players such as Honus Wagner, one of the first five inductees into the Baseball Hall of Fame; Robert ‘Earl’ Wilson, the first African-American pitcher for the Red Sox; and Billy Martin and Clint Courtney, known for their tireless feud starting at a 1952 New York Yankees versus St. Louis Browns game.

“There was a slew of incredible baseball players that came through (the ballpark), but we really don’t know much about the fans who came to watch these games,” Schon said. “That’s what the archeological excavation is looking at. We’re digging underneath where the stands used to be.”

Schon had visited the ballpark as a tourist when the idea of an archaeological dig came to mind. After a long approval process, Schon and students from Cochise College, University of Arizona and Bisbee High School began excavating the nation’s oldest continually running ballpark to find out more about how the sport stimulated the local economy through the belongings left or purchased by fans.

“While the baseball side of things is very interesting, as well as the study of the early history of baseball, it is ultimately a training exercise for these students,” Schon said.

Bisbee High School students attend class Monday through Thursday with Fridays off school. Some of the students taking the school’s Advanced Placement environmental science course volunteered their Fridays to assist in the dig as a quasi-lab component of the course.

“This keeps them out of trouble, but more importantly, it’s really about their education and exposing them to college-level work,” Schon said. “They’re working just as hard, and they’re doing just as good of job as my college students do when I take them on a project. (The project shows) them that they can do this and the U of A isn’t a pipe dream for them. They are qualified and capable of succeeding in a place like that, and I think gives them an edge, which they otherwise would not have.”

Bisbee High School sophomore Cesilia Garcia has attended almost every Friday dig since they began in 2016.

“I was just interested in learning more about our history because this ballpark is very old, and I didn’t know much about it other than what I’ve been told from my family,” Garcia said. “This has helped me learn more.”

Garcia plans to make a career in forensics and believes doing digs like this will help her advance her career goals.

“The students are great,” said Stephen Uzzle, a fellow digger and student at Cochise College. “They’re out here because they love it, just as we do, and they’re just as excited as everybody else is. They’re all a great help. They’re strong and young and all got great backs.”

Working on the dig site requires a substantial amount of physical labor – from shoveling dirt onto screens, which the students must manually sift, to hauling the assorted metal tools to and from the site.

For Uzzle, the dig brought together two of his lifelong passions: sports and history.

Uzzle has been on other archaeological digs, but he said the dig at the ballpark is different. 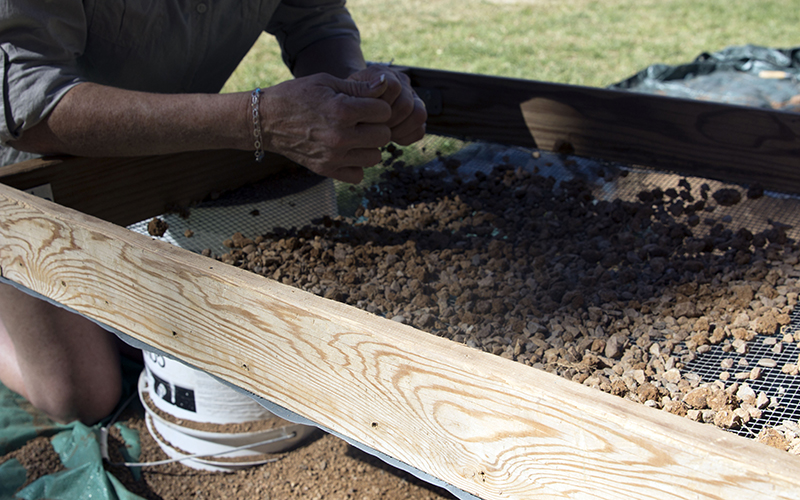 Students break down each individual clump of dirt excavated in hopes of finding any fragment of a potential artifact at the Warren Ballpark in Bisbee. (Photo by Maddy Ryan/Cronkite News)

“We can track all of our artifacts here back to historical records,” Uzzle said. “If I find a button, I can match it. If I find a broken bottle, I can find out where it came from because there’s written record of that. Whereas, we have to piece together that stuff on our own (for other digs).”

Schon and the students have uncovered bits of broken glass bottles and a few isolated finds, such as a 1930s bus token and blank firearm cartridges, which fans typically shot in the air as a form of celebration.

“(The bottles) can be dated based on their markings, and they tell us a lot about the fans and what they were doing,” Schon said. “But, we do find a bit more beer in the outfield. The bleachers tend to be a little more of a ruckus.”

Schon said one of the most memorable finds for him was a concentration of beer bottle caps recognized by Mike Anderson, a local historian and founding member of the Friends of Warren Ballpark advocacy group.

“Once we cleaned them up, I saw that they were all Coors Light and Bud Light, and I asked Mike Anderson, about it, and he said, ‘Oh yeah! I know the guy. He used to vend beer here in the ’80s, back when we had the outlaw league playing. He’d set up a stand right there and sell beer.'”

“Normally, you don’t have any sort of connection with the person who left the artifact behind,” Schon said. “But now we know exactly who it was, and you can just picture him setting up a beer stand and opening up bottles, and the caps fall off. You’d clean up as much as you can afterward, but a few things get left behind, and there they were for us to find.”

Inspired by the project at Warren Ballpark, Schon developed an anthropology of baseball course at the University of Arizona for the upcoming spring semester. He said he hopes to expand the ballpark project to include two other baseball fields in the area.