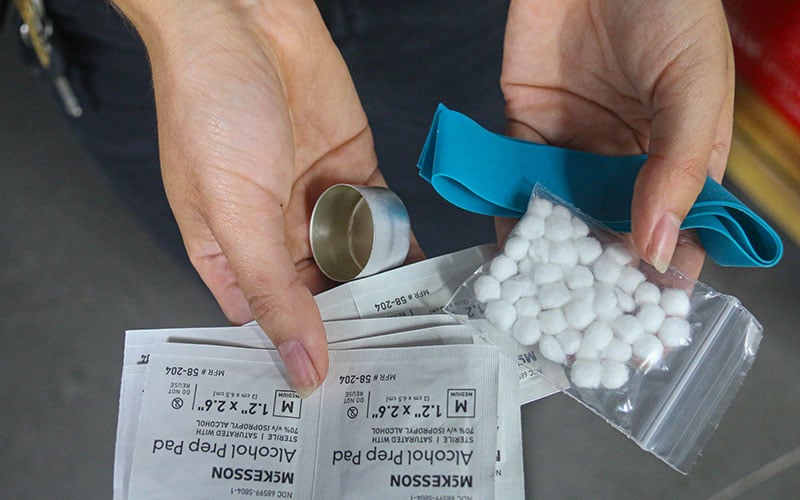 The nonprofit group Shot in the Dark offers safe injection kits at its needle exchange sites. The kits typically include clean needles, alcohol wipes, swabs and tourniquets. A law taking effect next month legalizes such programs, which research shows are effective in reducing the transmission of viral infections through dirty needles. (Photo by Gianluca D’Elia/Cronkite News) 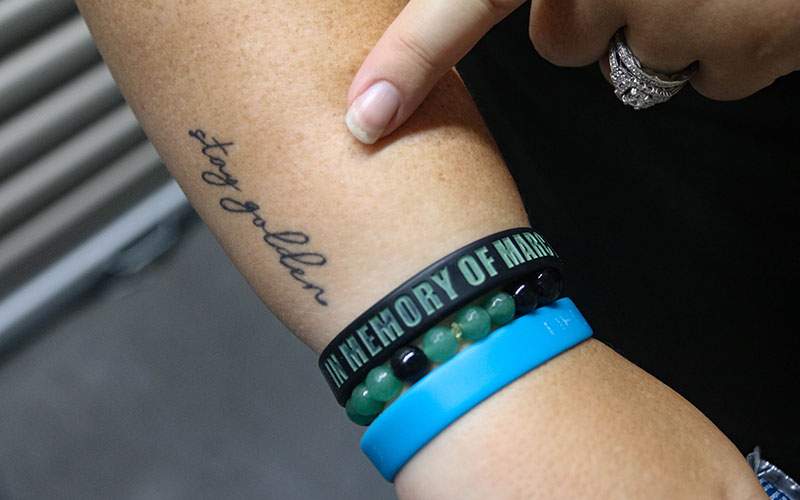 Jaclyn Brown, volunteer coordinator at Shot in the Dark, started working with the needle exchange program after her brother, Marc, died of a heroin overdose in 2018. She wears a bracelet commemorating a fundraiser she hosted in his honor. The tattoo on her arm – “stay golden” – is a phrase her brother used frequently. (Photo by Gianluca D’Elia/Cronkite News)

PHOENIX – For about a year, Jaclyn Brown has been training volunteers for a needle exchange program that works with drug users in Maricopa County. One of the first things she has told her helpers is the work they signed up for could be considered a felony in Arizona.

“That’s the No. 1 thing I would say … in case they thought, ‘Oh, this is totally cool (and legal)’ because we have a website,” Brown said, sitting on top of unopened boxes of syringes at the Phoenix storage facility for Shot in the Dark.

Soon, Brown and other volunteers won’t face any risk of arrest – and neither will those seeking the materials they distribute.

Exchanges provide sterile syringes, dispose of used needles and connect individuals with other resources or medical care, such as testing for HIV and hepatitis C. About 30 states allow such programs, and research shows that they’re safe, effective and helpful in reducing the transmission of viral infections through contaminated needles.

For Shot in the Dark and similar programs, the Arizona law doesn’t bring drastic changes, but it does lay out some specific guidelines. For example, the number of needles disposed of through an exchange program must be equivalent to the number of needles distributed. Exchanges also will be required to distribute needles for free and provide access to overdose reversal medication as well as educational materials on blood-borne diseases and substance abuse treatment.

Despite past legal risks, Brown said the work was too important for her not to be involved. She joined the group last summer as its volunteer coordinator, motivated by the loss of her brother, Marc Kane, who died from a heroin overdose in November 2018 at age 29. 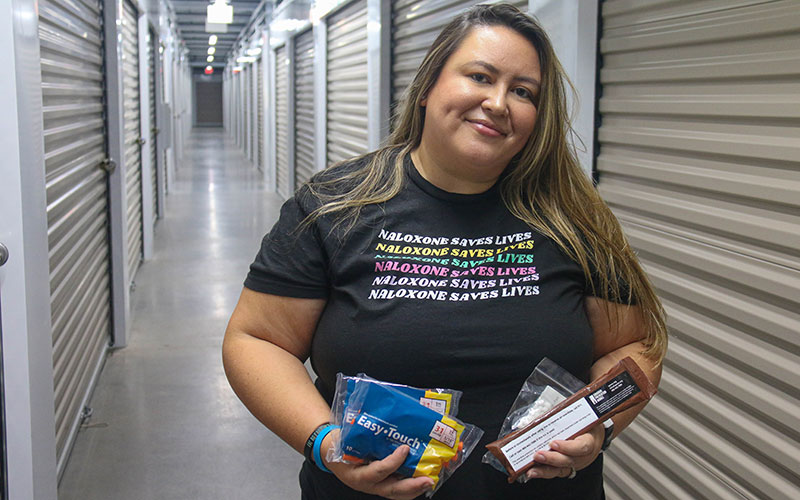 Jaclyn Brown, volunteer coordinator at Shot in the Dark, visits the nonprofit’s storage facility. One of the greatest challenges clean-needle exchanges face, she says, is the misconception that they enable drug use. (Photo by Gianluca D’Elia/Cronkite News)

The resources Shot in the Dark offers – such as clean needles, safe injection kits and the overdose reversal medication naloxone – could have been a lifeline for her brother, whose addiction began with opioids prescribed for pain after a car accident, Brown said.

“After my brother died, I didn’t care what people thought of us or our family, and I didn’t care about the stigma of it anymore,” she said. “I’m just going to help people how I can, so no one has to ever go through what we went through. And if that means I might get arrested for it … I don’t care. I really don’t care.”

The law comes as drug overdose deaths increased 30% across the U.S. last year, and 32% in Arizona, in large part because of the pandemic.

“The disruption to daily life due to the COVID-19 pandemic has hit those with substance use disorder hard,” Robert Redfield, former director of the Centers for Disease Control and Prevention, said in a statement imploring Americans “to take care of people suffering from unintended consequences.”

Dozens of programs statewide have long been facilitating clean needle exchanges, despite the potential consequences. In Phoenix, Brown said, Shot in the Dark has faced no legal issues aside from occasional trespassing complaints or being asked to leave properties where volunteers set up exchanges.

LifePoint, a needle exchange program founded by the Pima County Health Department, was among the first in Arizona to offer this form of harm reduction. The program was founded in 1996 as the nation battled HIV and AIDS.

Miguel Soto, HIV program coordinator in Pima County, has been involved in the needle exchange since 1999 and has advised other Arizona organizations that followed in its footsteps. Participation by behavioral health organizations, nonprofits and public health departments can boost support for such programs among the public, law enforcement and politicians, he said.

Pima County has had an agreement with police for officers to stay away from exchanges unless problems arise.

“It’s always been an open secret in Pima County,” Soto said. “Because it’s based in the health department, I think there was a lot more buy-in from the community and even the police department. We were always at the forefront of being really open and communicative with the police and local representatives, and even the neighborhood associations that we moved into.”

Soto said he hopes the legal recognition will lead to state and federal government funding for needle exchanges. Local, state and tribal health departments have been permitted to use federal funding to support syringe programs but not to specifically buy needles or syringes.

Rita Leal, from Shot in the Dark, said legalization will provide more legitimacy for exchanges and potentially help programs expand services and locations.

“We’ve been trying to ask people to use their parking lots – and this is when a business was closed – but they were so scared of the liability of what we were doing,” she said. “So now if it’s like, ‘Hey, it’s legal. Your governor signed this.’ … I think people will be more receptive.”

The future work of needle exchanges will likely be about more than just needles. Overdose deaths from synthetic opioids, particularly fentanyl, have spiked in across the country. Ducey also signed legislation this year to remove fentanyl testing products from the state’s list of illegal drug paraphernalia.

Leal began working with Shot in the Dark five years ago, while overcoming an addiction to heroin. Now, she said, people are more likely to turn to pills, sometimes placing them on pieces of foil, lighting them from the bottom and inhaling the smoke with a straw. Shot in the Dark provides items like straws and foil to avoid reuse.

Regardless of the drug, Brown said, one of the greatest challenges exchanges face is the misconception that they enable drug use.

“Before Shot in the Dark existed, people were doing drugs. People have done drugs. They’re going to do it regardless,” she said. “But if we can be there and help them, and they don’t have to reuse, (they) have naloxone, whatever it may be – why not be there?”

Editor’s Note: If you or someone you know needs help with a substance use problem, SAMHSA’s National Helpline – 1-800-662-HELP (4357) – is a confidential and free 24/7 information service, in English and Spanish. SAMHSA’s Buprenorphine Practitioner Locator can help identify a qualified practitioner who can prescribe buprenorphine for opioid-use treatment.