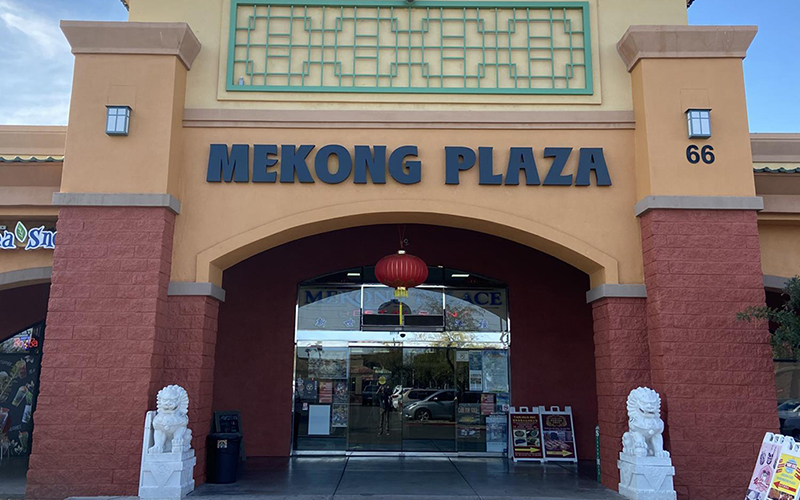 In Arizona, businesses owned by Asian Americans or Pacific Islanders generate more than $4.5 billion in annual revenues, according to the Arizona Asian Chamber of Commerce Inc. The Asian District in west Mesa has more than 80 shops, eateries and other storefronts. (Photo by Harry Croton/KJZZ)

The pandemic devastated small businesses across the country, but as the federal government stepped in to help, some Asian-owned businesses found the best relief came from the community rather than Congress.

At the height of COVID-19, the Small Business Administration and the federal government rushed to provide support for small businesses through grants, loans and relief funds. But some Asian-owned businesses experienced barriers.

Ellen Endo, president of the Little Tokyo Business Association in Los Angeles, said inaccessibility to business loans from the Paycheck Protection Program was the result of cultural and socioeconomic barriers, such as a lack of technology and language differences.

“It wasn’t like (the grant) was just open to everybody,” Endo said. “People that could did, but the others just missed out because they really were at a loss as to how to apply and where.”

Brian Kito is the third-generation owner of Fugetsu-Do, a Japanese sweet shop established in the heart of downtown LA in 1903 that specializes in mochi, a powdery, cloudlike rice cake. The shop’s resilience has been tested over nearly 120 years, and COVID-19 was its latest challenge.

“It was stressful, and it’s been stressful for all the small businesses,” Kito said.

According to the National Bureau of Economic Research, Asian-owned business activity dropped 26% from March to April 2020, with decreases continuing in May and June.

The report warned that sustained financial damages to minority and immigrant-owned businesses could be “problematic for broader racial inequality” and the lack of a significant economic rebound could prevent these business owners from weathering “prolonged closures, reduced demand from health concerns, and a more comprehensive recession.”

Community organizations in Little Tokyo stepped in with some solutions.

They bought meals from restaurants and distributed them to older people so they wouldn’t have to risk infection. The meals program, financed by GoFundMe donations and run by volunteers, helped support businesses and vulnerable members of the community.

“Those are the kind of grassroots, ground-up programs that were initiated during the pandemic period,” Endo said. “It was all done within the community – maybe not within our physical boundaries, but certainly within the Asian-American community itself.”

In Arizona, Asian Pacific American owned businesses generate more than $4.5 billion in annual revenues, with payroll exceeding $800 million, according to a publication from the Arizona Asian Chamber of Commerce Inc., a trade group in Phoenix.

The chamber indicated losses much higher than the National Bureau of Economic Research’s estimates, putting them at 60% to 85% since the beginning of the pandemic in March 2020, according to AZ Big Media, which cited the chamber.

Vicente Reid, the former CEO of the chamber, was quoted in a May article published in AZ Big Media that the organization had worked with cities to make available about $3 million to help local Asian-owned businesses. The chamber also launched Takeout Thursdays to highlight local businesses and help drive traffic. The chamber did not respond to requests from Cronkite News seeking updated information.

In the New York City borough of Manhattan, another community faced similar problems and once again turned to local nonprofits and community partners for solutions.

Manhattan’s Chinatown sprawls across 2 miles and is packed with restaurants, grocers, pharmacies, shops and more. As it did in LA’s Little Tokyo, COVID-19 forced several Chinatown businesses – new and multigenerational – to shutter their doors and hope for signs of recovery.

That relief came from the nonprofit Welcome to Chinatown, founded in March 2020 by residents who hoped to fill the void left by a lack of government support.

The organization developed a relief program to provide $1 million in small business grants by the end of 2021. It also developed a meal program, the Sik Faan Fund – “Let’s eat” in Cantonese. Officials said it has provided more than 25,000 meals and raised over $200,000 for Chinatown restaurants.

Jackie Wang, head of marketing and communications for Welcome to Chinatown, said the grant program was built with equitable access in mind. Along with an online application, multilingual volunteers canvassed businesses with paper applications.

Wang said it’s important to note that the organization is a partner to businesses, not a savior.

Wang said the pandemic spurred fear and hopelessness among business owners that sometimes manifested as shuttered doors and closed signs.

“We also have some businesses that said, ‘You know what? This is just my time to retire,’ ” Wang said.

Kito, at Fugetsu-Do in Los Angeles, pointed to a common thread in the Japanese-American community – strength.

“It’s not new to us, it’s generational,” he said, recalling the internment camps the U.S. forced Japanese Americans to during World War II. “You look at Little Tokyo or the Japanese-American community, and it seems like when it gets tough, they get tougher.

“And it’s something to be very proud of, the community coming together like that.”