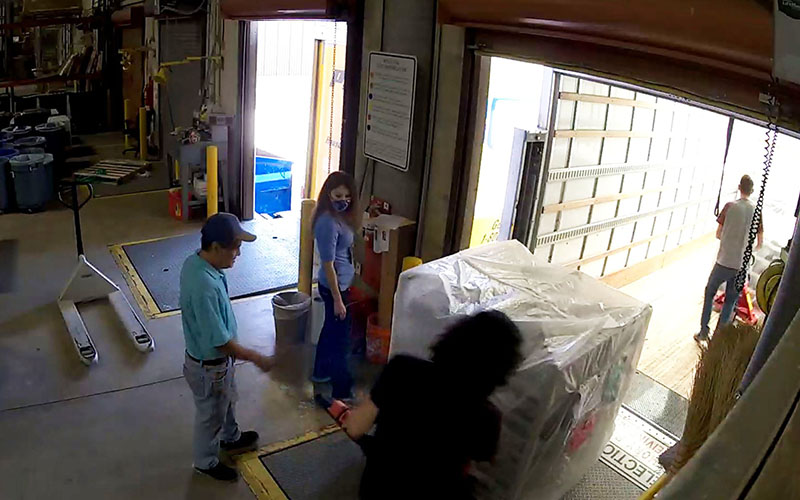 Workers with the Maricopa County Recorder’s Office unload some of the 2.1 million ballots that were returned Thursday after being in the custody for the last six months of Cyber Ninjas and other firms hired by state Senate Republicans to audit the county’s November election results. Critics have called the effort a sham, and say the private groups funding the effort further cloud the work. (Photo courtesy Maricopa County Recorder’s Office)

WASHINGTON – The private firm hired to audit Maricopa County’s 2020 elections said this week that its work was funded by $5.7 million in donations from conservative groups, a revelation that raised as many questions as it answered for critics.

The state Senate approved $150,000 in funds earlier this year for the work by Cyber Ninjas and other firms, an amount that was quickly eclipsed by the donations from private groups which critics said taints any findings of what they have called a “sham” audit.

The funding announcement comes as officials with the Maricopa County Recorder’s Office on Thursday recovered election devices and more than 2.1 million ballots that have been in the possession of Cyber Ninjas and held at the county fairgrounds for the past six months.

That came one day after the Justice Department raised concerns about security of election documents and their chain of custody after an election, pointedly reminding states in official guidance that there are “federal criminal penalties attached” to a failure to safeguard records.

A congressional panel and several private groups have sought records from Cyber Ninjas in recent weeks on everything from their audit procedures to their qualifications, from possible links to the campaign of former President Donald Trump to the source of their funding.

Cyber Ninjas CEO Doug Logan said the release of the just-over-one-page funding report Wednesday was an effort at transparency by the auditors.

“As we continue our commitment to transparency, we want to take this opportunity to publicly thank and disclose those organizations that have supported us during this audit,” Logan said in a prepared statement.

The actual report on funding was just five lines listing the groups that had donated to the effort along with the total amounts given, “beyond the $150,000 contracted from the Arizona Senate,” Logan’s statement said.

Other funding came from Voices and Votes, which donated $605,000; Defending The Republic, which gave $550,000; and the Election Integrity Funds for the American Republic, which contributed $280,000.

Logan also said that in addition to financial support, “the America Project, Voices and Votes and the DePerno Team (behind Election Integrity Funds for the American Republic, EIFFTAR) have also provided operational support and advice pivotal in executing the audit.”

Attempts to contact the donor groups Thursday were unsuccessful.

No details were released on where those groups raised the funds, although their websites all include an option where visitors can make contributions. The last three groups allow for donations specifically for the Arizona audit, what one of them called “the most important work being done to ensure election integrity.”

“From the very beginning, it was clear that the Cyber Ninjas were not equipped to properly handle these ballots or the county’s election equipment,” Secretary of State Katie Hobbs said Thursday in an emailed statement. “Unfortunately, the damage caused by this partisan ballot review has been done.”

The funding revelation is just the latest turn in an ongoing fight over the election audit.

In Congress, the House Oversight and Reform Subcommittee on Civil Rights and Civil Liberties demanded documents from Logan in a letter earlier this month in which lawmakers said they have “serious doubts” about the firm’s work on the project.

The committee requested a laundry list of documentation, including a list of Cyber Ninjas’ owners and stakeholders, records of its previous election-related clients and disclosure of any communication with Trump, his campaign or officials in his administration. It also asked for documents on negotiations with Senate leaders on the audit contract, records of funding sources and payments for the work.

The committee gave Cyber Ninjas until Wednesday to produce the information. Committee officials could not be reached Thursday to see if Cyber Ninjas had met the July 28 deadline.