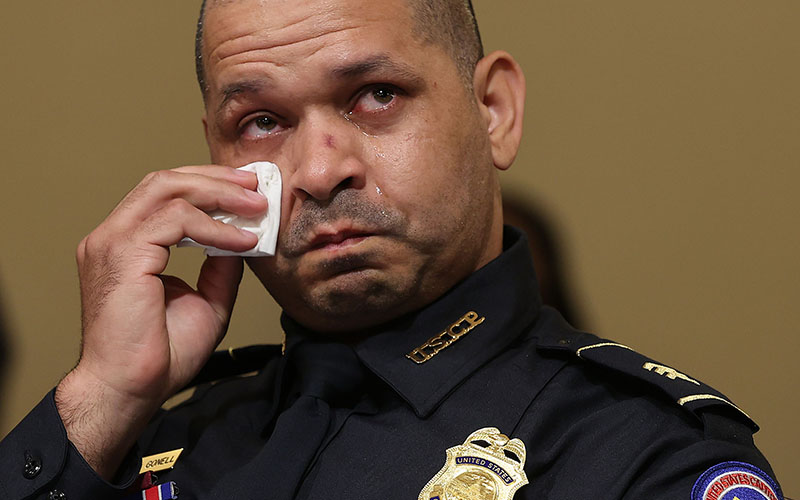 U.S. Capitol Police Sgt. Aquilino Gonell gets emotional while testifying about being on the front lines of the defense of the Capitol during the Jan. 6 insurrection. During the first day of a House committee investigation of the attack, Capitol and D.C. police officers testified to being trampled and beaten, hit by thrown objects, sprayed with chemical irritants and having their lives threatened. (Photo by Chip Somodevilla/Getty Images) 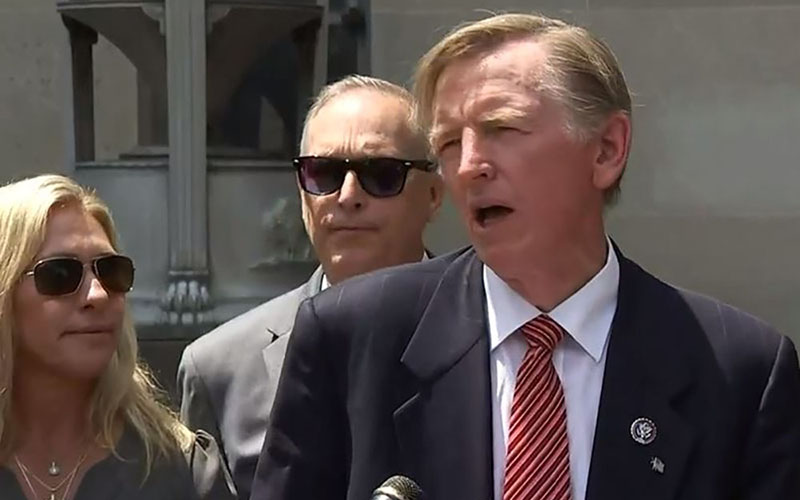 Rep. Marjorie Taylor Greene of Georgia and Arizona Reps. Andy Biggs, center, and Paul Gosar were among six Republican House members who called on the Justice Department to respond to what they called the possible mistreatment of “political prisoners” arrested in the Jan. 6 Capitol riot. Although the lawmakers said they deplored the violence of Jan. 6, they insisted suspects’ rights must be respected. (Photo courtesy of C-SPAN)

WASHINGTON – Police officers gave hours of emotional testimony Tuesday about being on the front lines at the Jan. 6 attack on the Capitol, while separate groups of GOP lawmakers attacked the hearings as a sham and defended the accused rioters as “political prisoners.”

The comments came as a special House committee began investigating the assault by supporters of then-President Donald Trump who were trying to keep Congress from certifying President Joe Biden’s election on Jan. 6.

More than 500 people have been arrested in the attack that injured 140 police officers, four of whom testified Tuesday that they were beaten, shocked and gassed by chanting protesters who called them traitors and threatened to kill them with their service weapons.

“I heard someone scream, ‘I got one,’ as I was swarmed by a violent mob,” said Metropolitan Police Officer Michael Fanone, one of the local police who responded to assist U.S. Capitol Police that day.

“They ripped off my badge, they grabbed and stripped me of my radio. They seized ammunition that was secured to my body,” Fanone said. “They began to beat me with their fists and with what felt like hard metal objects.”

The four officers who testified, two Capitol Police and two Metropolitan Police, all told similar stories to the Select Committee to Investigate the January 6th Attack on the United States Capitol. U.S. Capitol Police Sgt. Aquilino Gonell, an Army veteran who served in Iraq, said Jan. 6 was “the first time I was more afraid to work in the Capitol than my entire deployment to Iraq.”

“As a result of that day, we lost officers, some really good officers, but we held the line to protect our democratic process because the alternative would have been a disaster,” Gonell said. “I could have lost my life that day not once, but many times.”

But as the officers were testifying on Capitol Hill, a group of six Republican House members was outside the Justice Department to demand answers on the treatment of the Jan. 6 defendants.

They included Rep. Paul Gosar, R-Prescott, who called those arrested in the attack “political prisoners,” and Rep. Andy Biggs, R-Gilbert, who said the majority were peaceful protesters who have been mistreated by prosecutors.

“There are disturbing reports that some of these individuals are being abused and held in solitary confinement for up to 23 hours a day,” Gosar said. “These are not unruly or dangerous violent criminals.”

The Justice Department reported that more than 535 arrests had been made as of July 6, six months after the attack, and 165 had been charged with “assaulting, resisting or impeding officers or employees” while an additional 50 were charged with “using a deadly or dangerous weapon or causing serious bodily injury to an officer.”

Other charges include assaulting members of the media or destroying their equipment, entering or remaining in a restricted federal building or grounds, theft and destruction of government property, and conspiracy charges.

But Biggs said a majority of those at the Capitol were “peaceful protesters.”

Trump supporters clash with police and security forces outside the Capitol on Jan. 6, after thousands of then-President Donald Trump’s supporters marched from a “Stop the Steal” rally to the Capitol where lawmakers were certifying President Joe Biden’s election. (Photo by Brendan Smialowksi/ AFP via Getty Images)

Tuesday’s hearing was preceded by charges from a separate group of GOP House leaders, who insisted they want to get answers on police failures on Jan. 6, but accused House Speaker Nancy Pelosi of engaging in a coverup.

House Minority Leader Kevin McCarthy, R-Calif., called the investigative committee a “failed committee” that was made up of House members hand-picked by Pelosi to ask only “the questions she wants asked.”

McCarthy withdrew his nominees for the panel after Pelosi rejected two who have tried to lay the blame for the botched police response on the speaker’s office. That left just two Republicans on the committee, Reps. Liz Cheney of Wyoming and Adam Kinzinger of Illinois, both vocal Trump critics.

“Each of us are indebted to our brave Capitol police officers,” McCarthy said, but he said they were put in danger on Jan. 6 because “the leadership at the top has failed.”

“If you want the true answers, do not be afraid of the questions that will get asked,” McCarthy said.

An angry Fanone, who said he feels like he “went to hell and back to protect” lawmakers on Jan. 6, blasted those who “are downplaying or outright denying what happened.”

“Too many are now telling me that hell doesn’t exist, or that hell wasn’t actually that bad. The indifference shown to my colleagues is disgraceful,” he said, pounding the table for emphasis.

The GOP lawmakers said they deplored the violence of that day, but Gosar said that those “arrested for illegal acts on Jan. 6 deserve to be treated fairly.” That was echoed by Biggs.

Before they were chased away from their own news conference by sign-waving, whistle-blowing protesters, Republicans at the Justice Department event also said they have yet to receive answers from the attorney general to their questions about the treatment of those arrested in the attack.

“We’re not here to do more than say, ‘Give us the answers to the questions we’ve asked, let us know that due process is going forward, let us know that these people are being treated appropriately and fairly and humanely,'” Biggs said.

The Justice Department did not immediately respond to a request for comment Tuesday.

But the officers, who testified that they are still receiving treatment for injuries and counseling for the trauma of that day, called on lawmakers to put politics aside.

“For those people who continue to downplay this violent attack on our democracy and officers, I suggest them to look at the videos and the footage,” Gonell said. “For most people, January 6 happened for a few hours, but for those of us who were in the thick of it, it has not ended.”