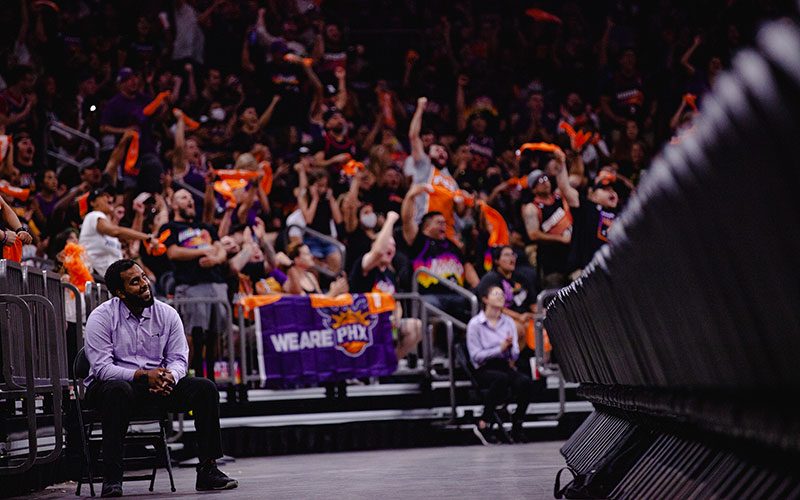 Most of the fans at a recent Road Game Rally at Phoenix Suns Arena were well behaved but a few isolated incidents of fights have Chase Field officials on guard for Wednesday night’s rally event. (Photo by Alberto Mariani/Cronkite News) 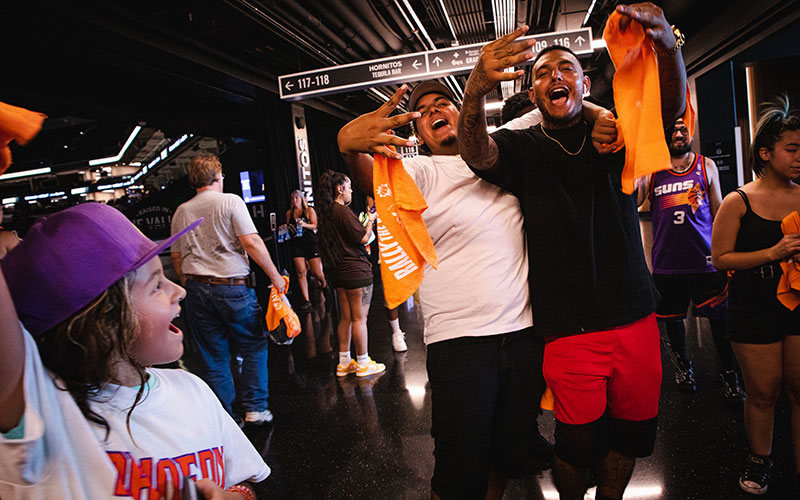 A Phoenix Suns fan became a viral sensation during Game 4 of the Western Conference Finals when he engaged in a fight with Denver Nuggets fans and yelled “Suns in four!” Some have questioned if celebrating aggressive behavior at sporting events is a good thing. (Photo by Alberto Mariani/Cronkite News)

PHOENIX – Two official statements, separated by three weeks. Both issued by the Phoenix Suns, both decrying fighting at Phoenix Suns Arena. Yet neither one was about the “Suns in four” guy, Nick McKellar, who became a viral sensation after pummeling Nuggets fans during the Western Conference Semifinals, highlighting the thin line between condemnation and celebration.

No, the Suns’ June 21 statement was in response to a brawl between Suns and Clippers fans early in the Conference Finals (not the only fight that took place during that series). And on Monday the team denounced violence on Twitter yet again after yet another fight, this time in the stands at the Road Game Rally for Game 3 of the NBA Finals on Sunday.

“Cheer loudly. Wear your gear proudly,” the most recent statement reads. “And show respect for your fellow NBA fans no matter who they rep.”

The second part of the statement also includes a more explicit reference to the consequences of Sunday’s brawl: “For those who stepped out of line at Sunday’s Road Game Rally, we’re investigating what took place and will take appropriate action with our partners in law enforcement.”

These recent Suns incidents constitute just a small part of a widely reported trend of inappropriate behavior among fans during the 2021 NBA playoffs, as stadiums return to full capacity. Edward Hirt, a psychology professor at Indiana University Bloomington who has studied fan identity, said fighting isn’t new. However, it may have been exacerbated by general world circumstances, most notably the pandemic. 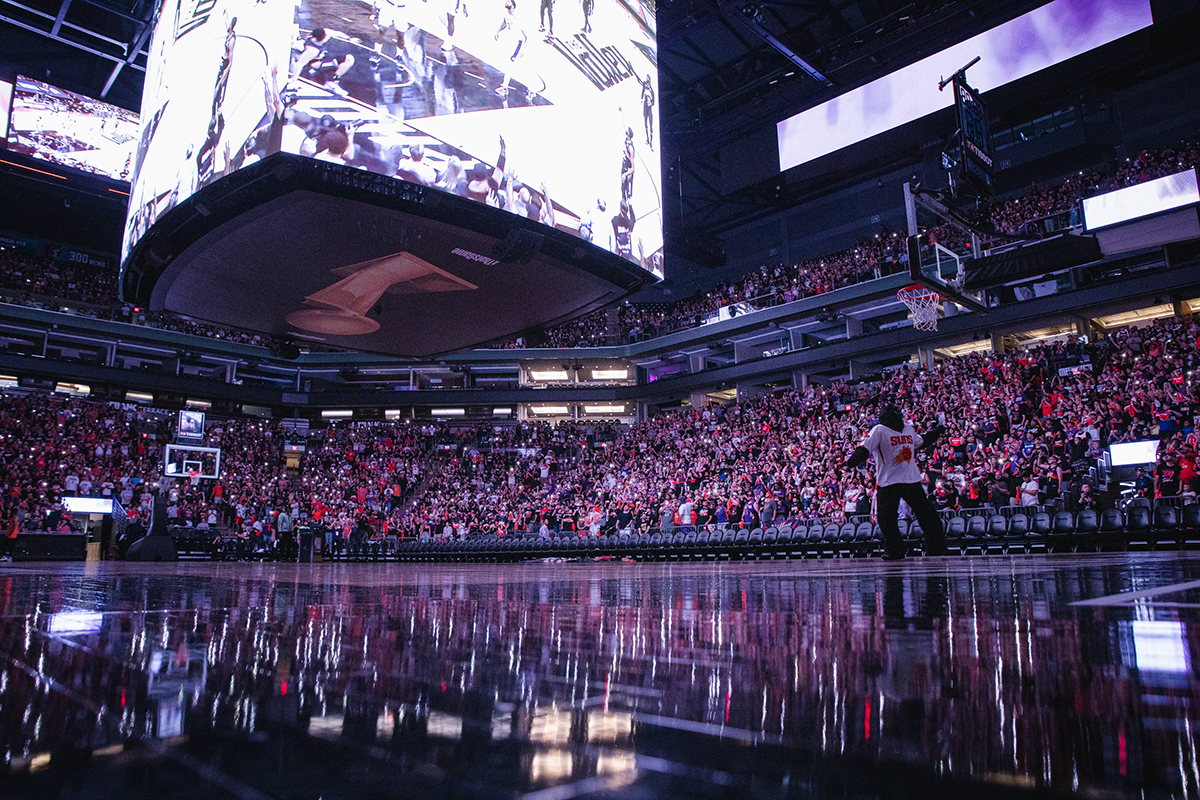 “Just a lot of contexts where people seem to be on edge, and really behaving badly, for lack of a better term,” he said, “in terms of how they’ve acted once they’ve been able to be out and about.”

Ari Novick, a therapist whose company provides the NFL, MLS and USL with a class designed to educate fans on proper stadium conduct, pinpointed one pandemic trend in particular.

“Alcohol and substance abuse was more common,” he wrote in an email, “so seeing an increase in disruptive fan behavior shouldn’t be a surprise.”

Hirt said that as much as fanship is defined by being part of a group, it’s also contingent on being at odds with other groups. The need for bragging rights can create animosity between fans, he added.

“There’s some downsides that are kind of sad reflections of humanity that are evidenced in fanship, and this is one of them,” he said.

Sam Sommers, chair of the psychology department at Tufts University and co-author of This Is Your Brain on Sports, cautioned against assuming that there has been an uptick in violence, which he said there would be no way to test for sure. But he noted that the prominence of examples like McKellar’s could fuel additional violence.

“Some of the most famous research studies on aggression and violence in psychology are ones that show modeling, social learning, that when we see this being done by others,” he said, “it reduces some of the constraints we feel and we’re more likely to act in an aggressive fashion as well.”

He added that the Suns’ condemnation of violence is not in line with previous treatment of McKellar. 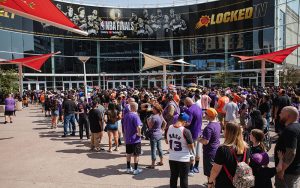 “While I think it’s great that the team is putting out a statement saying respect everyone and refrain from violence,” he said, “my understanding is that this individual was given tickets.”

Richard T. Craig, a communication professor at George Mason University, said he felt the primary purpose of the Suns’ statement Monday was to reiterate the family-friendly nature of Phoenix basketball.

“They’re looking to make sure that their product stays clean and sanitized,” he said, “for the purpose of making sure that anybody is welcome to come there.”

Hirt acknowledged the public relations intent of the statement but questioned whether, by calling attention to the violence, it would have a positive impact in practice.

“Sometimes you get more interest in a song if you say that it’s been banned by somebody: ’Hey, what’s that, it must be really racy, I gotta check this out!’” he said.

Ultimately, for Craig, it’s important for the media not to sensationalize these fights, but to discuss preventing them in the future.

“There really should be conversation around what actions need to take place to change, alter these behaviors.” Craig said. “Because otherwise, it’s just like being in the schoolyard. We’re showing ‘Fight! Fight! Fight!’ just to see the fight that took place, and the inappropriate behaviors or the appalling actions that happened.”

Sunday’s brawl in the stands took place not at an actual Suns game – unlike when McKellar presaged a Phoenix sweep while fighting Nuggets fans – but at a glorified watch party, in the absence of physical gameplay. Sommers compared it to instances of riots in the streets after a team has won a championship, with no game in sight.

The Arizona Diamondbacks are hosting another Road Game Rally for the Suns Wednesday, this time at the expansive Chase Field. The team plans to seat 15,000 fans in the lower deck but said Wednesday morning it is considering opening up more of the stadium. Seating will be first come first serve.