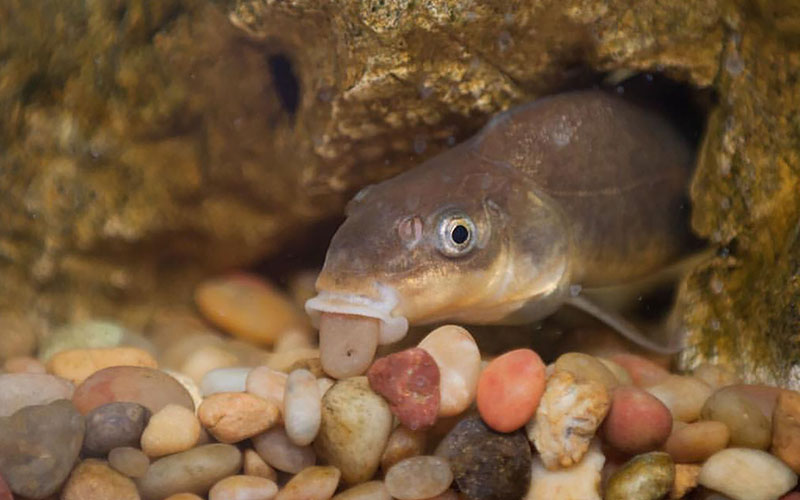 The razorback sucker, once found in the Colorado River from Wyoming to Mexico, was declared endangered in 1991 when its range had fallen to a few spots in the river. But the fish is on the way back, say federal officials, who have proposed upgrading its status to threatened species. (Photo courtesy U.S. Bureau of Reclamation)

WASHINGTON – Federal officials said the endangered razorback sucker has made enough of a comeback that it is time for the Colorado River fish’s status to be upgraded from endangered to threatened.

The U.S. Fish and Wildlife Service said Wednesday that its “evaluation of the best available scientific and commercial information” shows that “the species’ status has improved due to conservation actions and partnerships.”

But critics call the proposal to “downlist” the fish premature, saying that current populations of razorback sucker are not self-sustaining.

“They’ve put a lot of razorback sucker into the rivers; they’ve raised them in hatcheries and put them into the rivers, and that’s why the population numbers are high,” said Taylor McKinnon, senior public lands campaigner for the Center for Biological Diversity. “But those fish are not reproducing successfully.

“There has been progress but there needs to be more time and more work,” McKinnon said.

Andy Clark, statewide sportfish program supervisor for the Arizona Game and Fish Department, said conservation efforts are “going to be even more important” if the sucker’s status is upgraded to threatened. But he supports the move, calling the recovery of the razorback sucker “a positive across the board.”

Black-footed ferret on the way back, but hurdles remain experts say

The proposal to downlist the fish concedes as much, saying that even as a threatened species, the razorback sucker is still at risk for sliding back to endangered status “within the foreseeable future without current active and intensive management.”

The razorback sucker was once found all along the Colorado, from Wyoming to the Mexican delta, and could tolerate a variety of conditions, including high salinity and turbidity and wide-ranging temperatures and water flows. Mature fish can be up to 3 feet long, and they can live for more than 40 years, according to the Fish and Wildlife Service.

The fish was typically found in “low-velocity” areas of the river, such as backwaters and flatwater stretches. While dam construction disrupted their habitat, the sucker initially thrived in the reservoirs the dams created, but they were eventually crowded out by the later introduction of nonnative sport fish.

By the time the fish was declared endangered in 1991, it had been reduced to less than 25% of its historic range.

The first recovery plan for the razorback sucker, issued in 1998, identified the primary reasons for the species’ decline as “predation by nonnative fish species and loss of habitat.” That plan called for “maintaining genetic diversity, reversing the declining population trends in Lake Mohave and the Green River subbasin, protecting and restoring habitat, and augmenting or reestablishing five additional populations of razorback sucker in designated critical habitat.”

A 2002 amendment introduced criteria for downlisting the species that included reproduction rates of wild populations that “equals or exceeds mean annual adult mortality for each of the populations.”

The proposal to downlist the fish said populations far exceed the benchmark of 5,800 fish in the Green and Colorado rivers, but it noted that the wild reproduction rate was not making up for natural loss. Too many juveniles are still being eaten by nonnative fish before they reach breeding age, and “without the ongoing stocking to offset the lack of natural recruitment, the population would quickly fall below” the target for a self-sustaining population, the plan said. 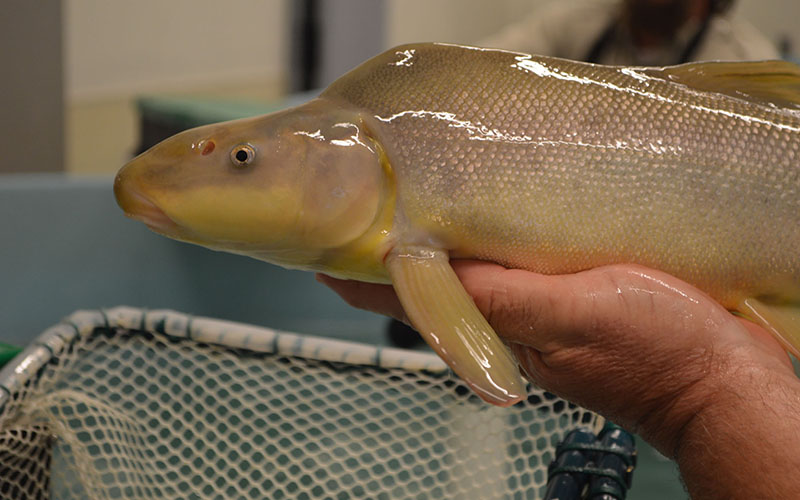 The razorback sucker is on the way back from endangered species status, but some warn it’s too soon to upgrade it to threatened status. The fish’s population is not yet self-supporting, they say, but is propped up by hatchery stocking. (Photo by Rob Mansheim/U.S. Fish and Wildlife Service)

McKinnon said that means the Fish and Wildlife Service “has not met that core criteria in its own existing recovery plan” for upgrading the sucker’s status.

“I expect that one of the main points of revision that they will propose in the new recovery plan will be to eliminate that criteria which they are currently not meeting,” he said.

“That would eliminate or weaken the requirement for self-sustaining populations of fish for downlisting, and we fear that that would create loopholes and divert the attention away from the critical need to address breeding success of these fish,” McKinnon said.

But Clark said the higher population numbers should justify the upgrade, as long as conservation efforts continue.

Calls seeking comment on the plan from Fish and Wildlife Service officials were not immediately returned, but in the Federal Register post announcing the proposed status upgrade it said that increased populations mean the species no longer qualifies as endangered.

“The threats to the razorback sucker identified at the time of listing in 1991 have been eliminated or reduced to the point that the species is no longer currently in danger of extinction,” the proposal said.

But McKinnon said that until the wild population is self-sustaining, the government should “stay the course,” keeping the endangered status and continuing conservation efforts should remain as they are.

“When that’s happening, then it’s time to entertain a discussion about downlisting,” he said. “As it stands right now, it’s a program that feeds nonnative fish with razorback sucker spawn.”