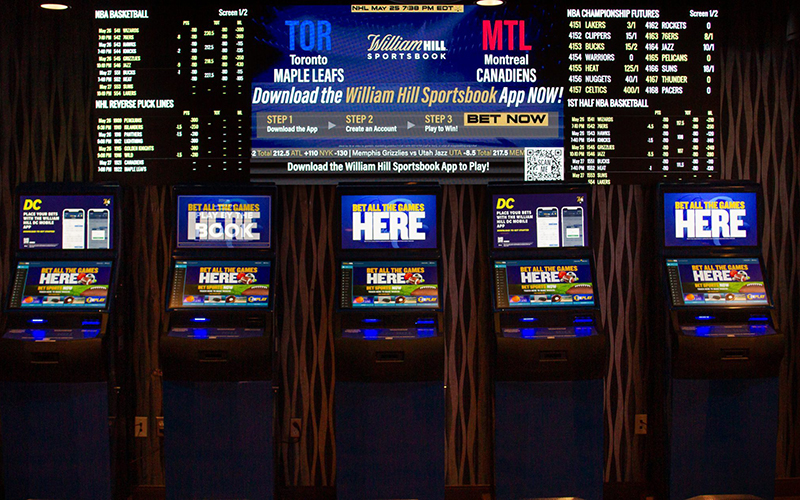 Kiosks like this one at Capital One Arena in Washington, D.C., will soon be a familiar site to Phoenix sports fans, too. The Fan Duel retail sportsbook inside Phoenix Suns Arena will allow for a variety of bets, including those on women’s sports. (Photo courtesy of William Hill Sportsbook)

PHOENIX – What comes to mind when you think about sports betting?

A dark room smelling of cigars? Railbirds at a horse track? A man with his hat pulled low over his brow in a casino just off the highway?

That’s the traditional view of sports betting. Since it became legal in the United States in 2018 – and with it apps, websites and booths at sporting events – it doesn’t look that way anymore. That could be good news for women’s sports, as some observers believe greater gambling accessibility could translate to increased interest and fandom.

“One solution to drive viewership for women’s sports would be adding gambling,” said Lindsey Darvin, an assistant professor at the State University of New York at Cortland who studies diversity and gender equity in sports. “Allowing folks to really get engaged in the same way that they’re doing on the men’s side, but for women’s sports because you don’t necessarily have to be a fan of a specific team, a specific athlete, a specific sports league.”

The landscape of sports gambling continues to shift.

“There’s always sort of that notion of men betting with their local bookie and were down at their local bar,” said Amber Hoffman, Managing Editor for Arizona Casinos, part of i15 Media, which runs websites that educate people in legal betting markets, including Arizona. “Now that things are legal in some way, either online or in person, in about two dozen states it’s becoming more mainstream.”

It is in Arizona, where the PGA Tour announced in April that it plans to open a sportsbook at TPC Scottsdale, and where construction has already started on a FanDuel retail sportsbook inside Phoenix Suns Arena. Legality is helping betting become interwoven with sports entertainment culture, Hoffman said. Fans who turn on sporting events are likely to hear discussions about point spreads, the over/under and fantasy sports.

In general, gambling and fantasy sports add a social component to watching games.

“(People) really enjoy the gambling side of it, and it really makes them very invested,” Darvin said. “They enjoy the fantasy side of it. They create teams with their buddies, with their friends. They meet every week. They do a draft.”

Along with the social aspect, sports betting encourages fans to engage with games for their entire duration because bettors still can bet on individual players and specific statistical achievements in contests that aren’t as riveting. 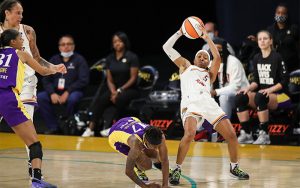 Women make up 40% of all athletes but only 4% of sports media coverage, according to a UNESCO survey. Betting could bring more interest to women’s sports, experts say, but lack of media coverage also is an issue. (Photo by Meg Oliphant/Getty Images)

“Investment is kind of a literal pun here in this situation,” Kempf said. “Whether it’s fantasy or betting or whatever all of a sudden now you care about every at bat, your player who you’re wagering on or who is on your fantasy team … that becomes important to you.”

Currently, people gamble on women’s tennis and it is one of the most consistently watched women’s sports, even sometimes outdoing men’s tennis as it did in the 2018 U.S. Open.

Darvin believes adding fantasy sports for women’s sports would introduce more fans because even those who don’t know much about the WNBA, for example, could still get invested in players and their seasons. She also thinks adding discussion of fantasy sports and betting to women’s sports broadcasts could garner more interest.

Women make up 40% of all athletes but only 4% of sports media coverage, according to a UNESCO survey. Darvin said betting could lead to more interest, but the lack of coverage of women’s sports might mean people can’t optimize their betting experience.

“Which is going to drive it better first?” she asked. “Does the gambling and the fantasy have to take off? But then, what about stats? What about the media? I would love to see them both happen at the same time but I know it’s probably not possible.”

Kempf sees sports betting as one remedy for the need women’s sports have to grow their audience.

“People don’t know as much and when you don’t know as much about a sport you’re standoffish,” she said. “The more that people feel like they’re part of it, they understand it, they can discuss it with their friends and be involved with it from any aspect, the more likely they are to feel part of that group and to continue to engage with it.”

Because people who don’t know much about women’s sports still might know about sports betting, Kempf thinks fantasy and gambling could help bring in fans for women’s professional sports at “warp speed.”

She sees Athletes Unlimited as a natural fit for sports bettors and fantasy sports enthusiasts because the Athletes Unlimited model is similar to how a fantasy team operates. Rather than having set teams, each athlete competes individually to earn points and win the season. Because they play team sports, every week team captains draft a new team, looking at who did well the week before and what holes they need to fill in their lineups. 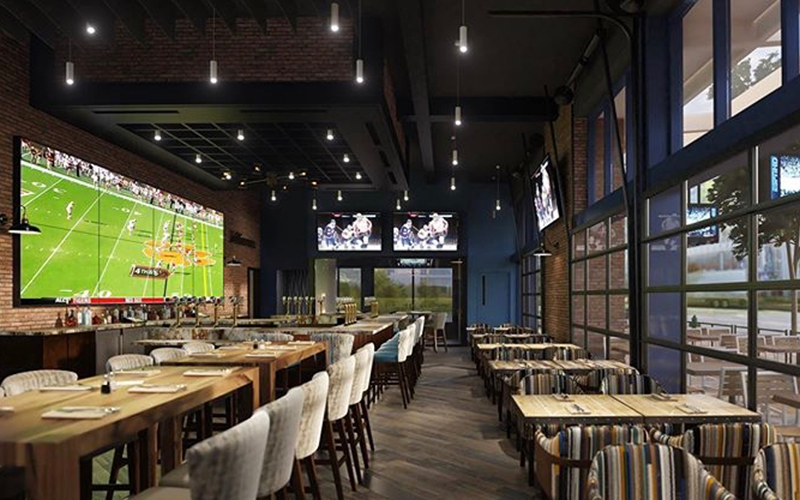 Fans at Capital One Arena in Washington, D.C., can bet on the WNBA’s Washington Mystics and other teams at the sportsbook inside the building. (Photo courtesy of William Hill Sportsbook)

Kempf said the league is taking care to be sure it isn’t just going after traditional sports fans but are looking for ways to engage with other demographics. She sees sports betting as part of that strategy.

In contrast to Darvin and Kempf, Jill R. Dorson, the managing editor at sports betting news site Sports Handle, believes sports betting is only likely to drive interest in women’s sports teams that excel or where people are already fans.

She used Connecticut as an example. Because the community is already invested in the University of Connecticut women’s basketball team, sports betting might be another way they can engage, but she thinks the impact will be small elsewhere.

“If you’re in a state where the women’s college basketball teams are mediocre and don’t have a great following, sports betting is not going to massively positively affect them,” she said.

Patrick Eichner, director of communications for PointsBet, agreed with Dorson in general but added that career bettors and casual betters are different. For casual bettors, he doesn’t anticipate an increased interest in women’s sports. For career bettors, he sees a possibility that they will become invested because they are always trying to find an edge and women’s sports might offer the possibility to make money where others don’t.

Viewership for women’s sports is up across the board, according to ESPN. Eichner said betting on women’s sports follows suit. ESPN’s Tournament Challenge for March Madness saw 103% growth in 2021 compared to 2019, meaning more than twice the number of people who filled out a bracket for the women’s tournament in 2019 did so in 2021.

PointsBet saw a significant increase in sports betting around the women’s NCAA Basketball Tournament this year compared to previous years and a similar trend with the WNBA, Eichner said.

He expects betting on the WNBA to increase once league schedules return to normal after adjusting for COVID-19 because most of the WNBA season normally happens in the summer after the NHL and NBA playoffs rather than during them which is the case right now.

Betting companies like PointsBet recognize the potential value in investing in women’s sports. PointsBet just became an official betting partner of the WNBA, and BetMGM partnered with the LPGA.

“The big names in the industry, like PointsBet and BetMGM, are looking for ways to grow,” Hoffman said. “One of the most untapped markets is women.”

Because women’s sports and sports markets are both growing their following, it represents an opportunity for the two to help each other along the way.

“It really is kind of a shared vision across the board in terms of two entities that are growing at a pretty rapid pace and starting to open themselves up to new demographics and being able to join forces and see, ultimately, how you can help each other on both sides of the table,” Eichner said.

Now, PointsBet can work with specific WNBA teams on sponsorships and integrate the WNBA logo with its product. The company also highlights a WNBA matchup of the night every night on its social media.

“If you have hundreds or thousands of people who have stakes in this either literally in betting and real money, or in just bragging rights, with their small friend groups, or whatever it is they’re going to tune in,” Kempf said. “They’re going to not only tune in, but they’re going to pay attention so that’s great for your partners and your sponsors because anything that they are delivering those fans, or viewers, or whoever it is that it’s engaging are paying attention to that as well.”

As more states implement legal sports betting, it will become clearer how they impact women’s sports. In Arizona, sports betting is set to launch on Sept. 9, a fast turnaround since Gov. Doug Ducey only signed the law permitting wagering on sports betting and daily fantasy sports in April.