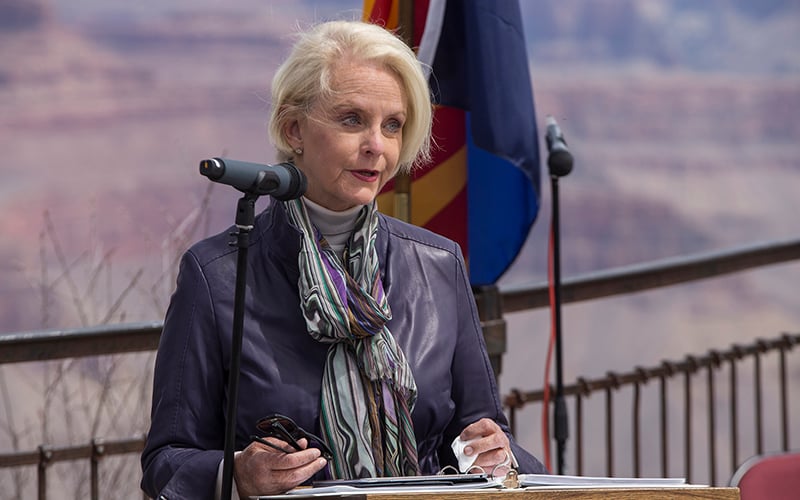 Cindy McCain, widow of the late Republican Sen. John McCain, was a leading GOP voice in support of Democrat Joe Biden’s presidential bid. Biden this week nominated McCain, shown in a 2018 photo, to be the U.S. representative to the United Nations Agencies for Food and Agriculture, an ambassador-rank posting. (File photo by Jenna Miller/Cronkite News)

WASHINGTON – Presidents typically pick ambassadors for their technical skills or their political connections, but in Cindy McCain’s case it is probably a little bit of both, experts say.

President Joe Biden on Wednesday nominated McCain – a lifelong Republican who came out strongly in support of Biden’s candidacy last year – to be the U.S. representative to the United Nations Agencies for Food and Agriculture, a post that carries the rank of ambassador.

But analysts say it’s more than just politics, pointing to McCain’s lifetime in the public spotlight. Her nomination fits in a “gray area,” said Doug Bandow, senior fellow at the Cato Institute.

“Sometimes you get this gray area where they’re not necessarily a diplomatic professional, but there’s much more than just handing out cash,” Bandow said.

It wasn’t cash that McCain delivered to the Biden campaign – but what she delivered in 2020 was probably more valuable than that.

“There was no bigger political force in Arizona behind Joe Biden than Cindy McCain,” said Mike Noble, chief of research for OH Predictive Insights. “Her enthusiastic endorsement almost assuredly tipped the scales to send the state’s 11 electoral votes to Biden.”

That’s because McCain was one of the first Republicans to come out, publicly and vocally, in support of Biden against then-President Donald Trump, with whom the McCains have been engaged in a long-running feud.

It began in Trump’s first run for president, when he belittled the service of Sen. John McCain, R-Ariz., a Vietnam veteran who served years in a North Vietnamese prison camp. Trump said McCain was no hero, that he liked “people who weren’t captured.”

John McCain announced that he would not vote for Trump in 2016, and was a critic of the administration, while Trump continued to periodically snipe at the Arizona senator. When McCain died of brain cancer in 2018, former President Barack Obama delivered a eulogy but Trump, the sitting president, was not invited to the ceremony.

At the Democratic National Convention last year, Cindy McCain threw her support behind Biden with a video detailing the friendship between him and her late husband. McCain’s daughter, Meghan, and more than 100 former McCain staffers also announced they would be supporting Biden.

Neither Trump nor the Arizona Republican Party responded to requests for comment on McCain’s nomination. But in a prepared statement from the McCain Institute – the public policy organization founded by her late husband – Cindy McCain said she was honored by the nomination.

“I am honored to be selected for this post and to represent the United States on the front lines of these challenges,” McCain’s statement said, adding that the U.S. “has long been a leader in the fight against hunger and malnutrition worldwide.”

It’s not clear what expertise McCain has in the area of food policy. Besides being in charge of her family’s beer and spirits distributorship, she chairs the board of the McCain Institute and serves “numerous other civic and philanthropic organizations,” according to the White House. She is probably best known for her work against human trafficking. 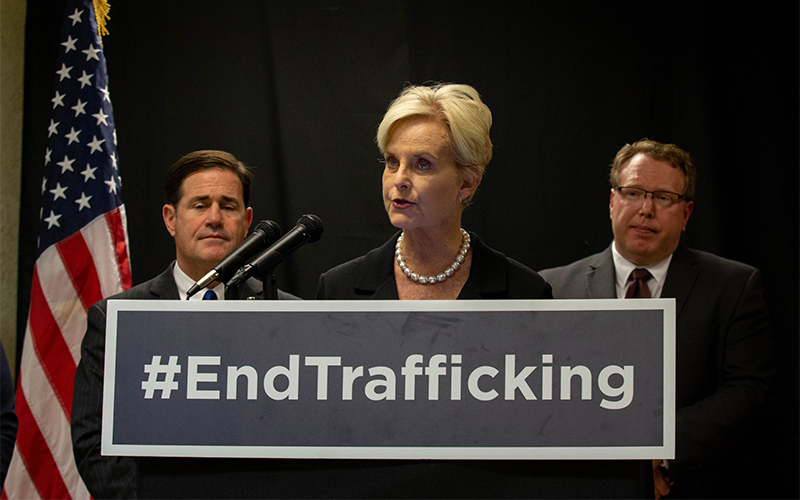 She has been nominated to work on food and agriculture programs, but Cindy McCain is perhaps best known as an advocate against human trafficking. (File photo by Meg Potter/Cronkite News)

“I’m not really sure if she has any particular background in food or agriculture,” said Terry Miller, who served as ambassador to the U.N. Economic and Social Council. He said McCain’s prospective job “has often been a political appointment of the president.”

But Miller, who currently serves as director of the Heritage Foundation’s Center for International Trade and Economics, said the most important qualification of an ambassador is the ability to effectively advocate for U.S. policies. An ambassador must “have the support of the president, which she clearly does,” he said.

The U.S. mission works with the U.N. Food and Agriculture Organization on emergency food aid, world hunger and sustainable agriculture. The Trump administration attempted to cut the U.S. contribution to the mission almost in half last year.

Experts said ambassadors are often experts on a narrow subject or “have previous ambassador experience.” What McCain brings is her “influence in political circles” and her late husband’s connection to Biden.

“I’ve always admired Cindy’s dedication to service, to Arizona, and to our country,” said Sen. Mark Kelly, D-Ariz. “I know she believes deeply in the power of America to promote peace, security, and health around the world.”

The White House declined to comment on the nomination and McCain could not be reached for comment. But in a written statement Wednesday, she said her previous work with the McCain Institute “has shown me the power of committed action to mobilize action for change to benefit the world’s most vulnerable.”