President Joe Biden, flanked by Sen. Rob Portman, R-Ohio, and Sen. Kyrsten Sinema, D-Ariz., who led a bipartisan group of senators in negotiations on a proposed $1.2 trillion infrastructure plan that the White House signed off on Thursday. (Photo courtesy C-SPAN)

WASHINGTON – President Joe Biden and a bipartisan group of senators announced agreement Thursday on a “historic” $1.2 trillion infrastructure plan that is heavy on construction but does not include the “human infrastructure” the White House originally wanted.

Sen. Kyrsten Sinema, D-Ariz., one of the negotiating team leaders, said the framework of the deal is “a realistic compromise” that invests heavily in modernizing U.S. infrastructure and “is fully paid for and does not include tax increases.”

The deal still needs approval from the Senate, which is scheduled to leave town Friday for a two-week recess. Biden, who originally proposed a $2.2 trillion plan, welcomed the compromise and said he will continue to work with Congress to get the child care, schooling and clean-energy tax cuts included in his original proposal.

The plan would spend $1.2 trillion over eight years, including $579 billion in new spending. Of that, $312 billion would go toward transportation projects such as highways, ports, public transit and initiatives like electric vehicle charging stations. Another $266 billion would be used for water projects, broadband and environmental remediation, with $5 billion set aside for Western water storage.

Sinema called the compromise “more than pavement and airports,” saying it will provide “full funding to expand broadband to the most rural parts of tribal communities,” and to more remote areas in southern Arizona.

While the compromise is far less than his original request, Biden still said he got two-thirds of what he asked for in the American Jobs Plan.

“We’ve all agreed that none of us got what we all would’ve wanted, I clearly didn’t get all I wanted,” Biden said during an impromptu news conference with the Senate negotiators Thursday. “But this reminds me of the days when we used to get an awful lot done up in the United States Congress.”

Biden said the $1.2 trillion plan includes investments that are “so badly needed” in transportation, water infrastructure, sustainable power and energy investments, and more. An example, he said, is that the plan “will replace 100% of lead water pipes to ensure clean drinking water.”

The White House proposal was unveiled March 31, but stalled in the face of opposition from Republican lawmakers who argued that health care, education and other parts of the plan should not be considered infrastructure. They also balked at the administration’s plan to increase corporate income taxes, a move the White House said would raise more than $2 trillion over 15 years, making the program a one-time investment.

Previous negotiations with a group of congressional lawmakers broke down, but the latest deal was crafted by a bipartisan group of 10 senators – five Democrats and five Republicans – led by Sinema and Sen. Rob Portman, R-Ohio.

The group said they were able to fund the package without raising taxes, but through maneuvers such as redirecting unused unemployment funds and using proceeds from the government’s auction of 5G spectrum rights. They insisted the plan would not increase the overall size of the federal deficit.

But Brandon Arnold, executive vice president of the National Taxpayers Union, said that while it “may appear to be true” that the plan is deficit-neutral, “My guess is that it certainly will increase the deficit.”

For example, he mentioned the plan is redirecting leftover funds from states that did not spend down their federal pandemic unemployment assistance funds. There’s about $25 billion in excess unemployment funds that normally would have been used to reduce the deficit – “currently at $280 trillion nationally,” he said – but instead will go to infrastructure spending.

He said he has not seen tax increases in the proposal, but that he wishes other methods of funding were considered like user tax fees. 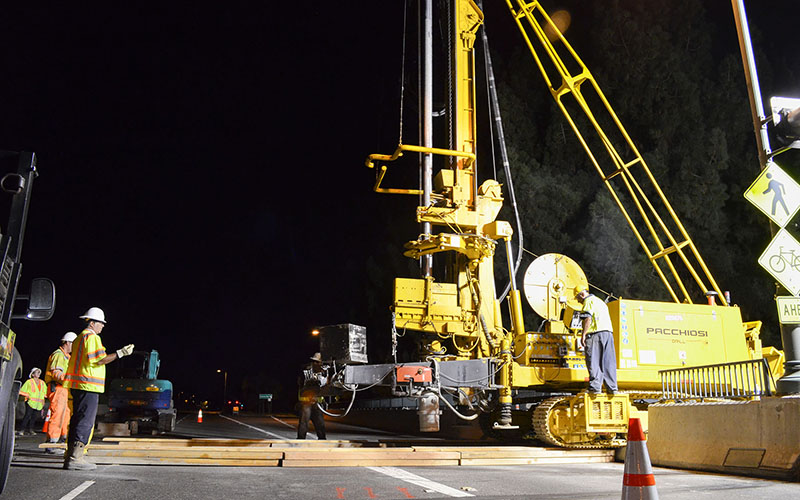 The $1.2 trillion infrastructure deal does not include the “human infrastructure,” like health and child care, the president wanted, but does fund more traditional projects like roads, ports and water projects. (Photo by Todd Plain/U.S. Army Corps of Engineers)

Arnold welcomed the overall reduction in the plan, but said the proposal is “not a real way of spending taxpayer dollars.” He called it a “common tactic in Washington” to redirect money and cut future spending to use funds now, but that “some of these savings are just on paper and don’t take effect.”

“I think it’s a positive thing that they reduced the size of the initial Biden proposal,” said Arnold. “But the most concerning part is that the plan is largely not substantive in nature.”

Biden still hopes to get the other half of his original plan that invests in “human infrastructure,” saying he would not sign an infrastructure bill if Congress does not also advance the second half.

“Investments in physical and human infrastructure are inexplicably intertwined,” he said.

He and the lawmakers said the deal shows that Democrats and Republicans can work together.

“Today is a huge day,” Biden said. “It shows American democracy can deliver, and it’s an important step forward for our country.”

That was echoed by Sinema, who often invokes the need to work across the aisle.

“We’ve all heard so many times in recent months that bipartisanship isn’t possible anymore,” she said. “I will work with literally anyone to get things done for our state.”