Some Phoenix Suns fans are figuring out way to watch the Suns and Los Angeles Clippers at Staples Center in LA because the tickets are cheaper. (Photo by Kevork Djansezian/Getty Images)

PHOENIX – The rising cost of attending a playoff game on the secondary ticket market has some Suns fans considering a road trip to Los Angeles, where ticket prices are significantly lower.

Tickets for Thursday’s Game 3 of the NBA Western Conference Finals at Staples Center were as low as $77 on StubHub Wednesday afternoon. Seats for a potential Game 5 in Phoenix, meanwhile, were starting at $242 for upper level baseline seats.

The BirdGang Travel Club is coordinating a trip to California for Saturday’s Game 4 and is watching the price of tickets, expecting them to drop more. The Suns lead their series with the Los Angeles Clippers 2-0.

Tyler Vasquez, co-owner of the BirdGang Travel Club, said his face value home ticket for the Suns’ Game 2 was $595. However, for games at Staples Center, after adding together travel, lodging and ticket prices, the cost would be comparable, and could drop.

Vasquez said LA ticket prices may continue to drop if the Suns keep winning and if Clippers All-Star Kawhi Leonard is sidelined due to a knee injury.

Although the ticket prices in LA are decreasing by the day, the reverse is seen in Phoenix, where the team has returned to the postseason for the first time in 11 years.

“We are in a culture for dynamic ticket pricing where the team, venue, the promoter can set the price as they see fit,” said Jason Karniol, owner of Chandler’s Assured Quality Tickets, “based on demand, who we play, the day of the week.”

Season-ticket holders have avoided paying the high ticket prices because they could secure their same seats at a designated preset price throughout the playoffs, Karniol added.

“The tickets are $800 – $900 for decent lower levels right now, which sounds absurd when five or six years ago that was a $140 ticket,” Karniol said. “But you’re not paying that much over what the Suns are charging.

“That ticket you’re paying $800 for was probably 600-something dollars, so you’re only spending $200 more than what it would have cost you.”

The Suns’ last NBA Finals run was in 1993, when they lost the championship series 4-2 to the Chicago Bulls. Since then, the furthest they’ve gone is the Western Conference Finals in the 2009-10 season, when they fell to the Los Angeles Lakers.

For two fans that have followed the Suns since 1993, being at a Suns home game is worth every dollar.

“I’m so happy for our city and for all the people that have been die-hard fans for so long,” Ruby Navarro said. “And we are going to take the series, and then we’re going to go on and make the finals.” 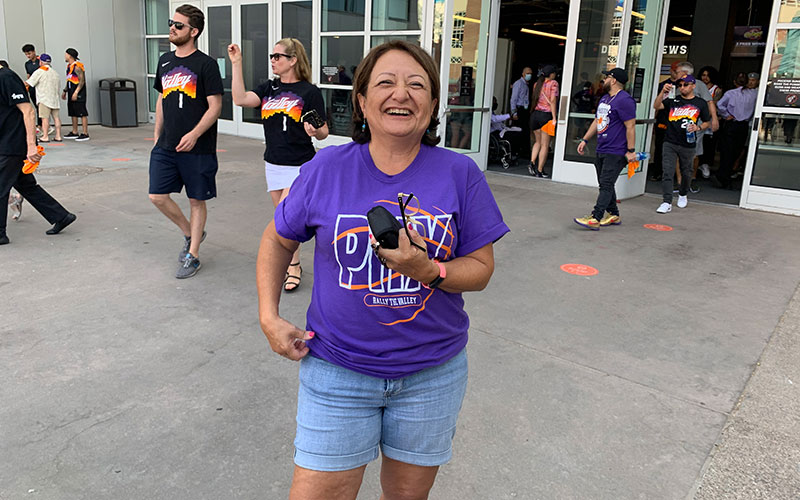 Jason Horn added, “At the end of the day, we’ve always had a chip on our shoulders for LA teams, and I think we are about to get them.”

“The fact that we beat them without Chris Paul lets you know where this series is going to lend,” Horn said, “Suns in four.”

If the Suns make it to the Finals, expect hefty ticket prices.

“The face value of the ticket will increase,” Karniol said. “However, the last two rounds, this round, the Nuggets, and the Clippers, Game 1 were not good sellers.

“I suspect Game 1 of the NBA Finals might be a little different. If we make it, the Suns will have the home-court advantage again so we will host Games 1 and 2.

“People know these tickets are expensive. Most people can’t afford these insane prices. So, what they do is skip Game 1 so they can see Game 2. But that doesn’t mean that prices are not going to be high.”

For now, the Birdgang Travel Club plans to take advantage of the cheaper seats in LA before prices spike even higher for the Suns home games.

Of course, not all tickets in LA are cheap. Courtside tickets for vaccinated fans were going for as much as $11,383 on StubHub Wednesday afternoon.

Despite the rising Phoenix home game ticket prices, fans like Vasquez plan to attend, if the cost is within his means.