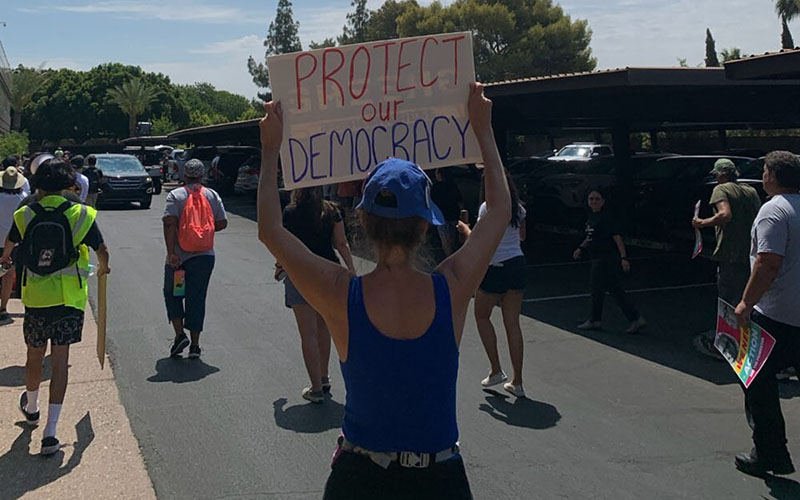 Protesters gathered outside the Phoenix office of Sen. Kyrsten Sinema, D-Ariz., to urge her to vote for doing away with the filibuster – something Sinema has said she will not do. Critics say the filibuster will let Republicans torpedo President Biden’s agenda. (Photo by Harrison Klopp/Cronkite News) 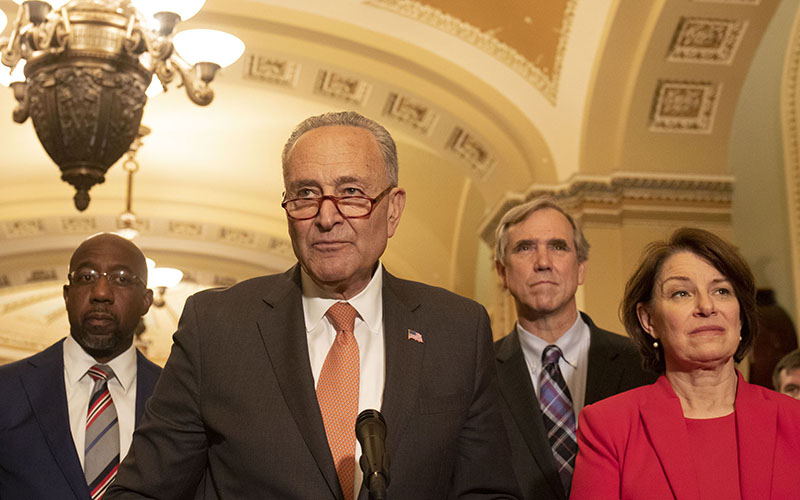 Senate Majority Leader Chuck Schumer, surrounded Tuesday by other Senate Democrats, challenged Republicans to allow a vote on voting rights legislation. All 50 GOP senators voted to block a vote, allowing a filibuster on the bill to continue. (Photo by Brooke Newman/Cronkite News)

WASHINGTON – Sen. Kyrsten Sinema, D-Ariz., repeated her refusal to end the filibuster Tuesday, the same day that Republicans used the maneuver to block debate on sweeping voting rights legislation that has already passed the House.

Her announcement reignited anger among Democratic Party progressives, who protested Tuesday outside Sinema’s Phoenix office where they demanded that she “stand up for the people of Arizona.”

Phoenix Police arrested 10 people for trespassing during that protest, which came just hours before the Senate voted to block debate on the For the People Act.

“I’m here today to tell Senator Kyrsten Sinema that actions speak louder than words,” said Channel Powe, one of those at Tuesday’s protest. “There’s no way that you can claim to be a proponent of the voting rights act and still stand in the way of the For the People Act, blocking our voting rights.”

Sinema did vote to move forward Tuesday on the voting rights legislation, along with the other 47 Democrats and both independents in the Senate. But all 50 Republicans voted to continue debating the bill – or filibuster it – and it takes 60 votes to end a filibuster and move to a vote on any legislation in the Senate.

With Vice President Kamala Harris in the president’s chair as the tie-breaking vote, Democrats could have given final approval to the bill – but for the filibuster.

In a Washington Post editorial Tuesday, Sinema claimed that ending the filibuster would hurt democracy in the long run, by allowing laws to whipsaw back and forth as different parties gained simple majorities in the Senate.

“Arizonans expect me to do what I promised when I ran for the House and the Senate: to be independent – like Arizona – and to work with anyone to achieve lasting results,” Sinema wrote.

It’s not the first time Sinema has been at odds with her party: She caught heat with a “thumbs-down vote” in March on a proposed $15-an-hour minimum wage, and later when she missed a vote in May that would have created an independent commission to investigate the Jan. 6 insurrection.

Political analysts say it’s too early to tell the long-term effect Sinema’s actions will have on her chances of reelection, but that she “is walking a fine line in her home state” that has a “long Republican lineage.”

But they were not surprised by her actions, which they said is part of Sinema’s political strategy.

“Her party is applying continuous pressure to end the filibuster, and Sinema is burnishing her centrist bona fides among moderates,” said Mike Noble, chief of research for OH Predictive Insights.

Noble said his organization polled registered Arizona voters after the minimum-wage vote and found Democrats were dissatisfied with Sinema, but the dip in party support was only temporary. Within two months, her numbers had already rebounded, he said.

“There was a penalty at first, and if that would’ve stayed longer term it could’ve given her some real electoral challenges, but she’s not up for reelection for a while so her controversial vote makes her stand out,” Noble said.

Kyle Kondik, managing editor of Sabato’s Crystal Ball at the University of Virginia’s Center for Politics, said the fact that Sinema is “not as liberal as the rest of the Democratic caucus” may help her in the future. But it is unclear how many times she can vote against her own party without it having long-term consequences.

(Video by Harrison Klopp/Cronkite News in collaboration with ABC15 Arizona)

“Every day it goes on, the more and more power she wields,” Noble said. “Sinema understands she doesn’t lose Democratic support at the ballot box by coming out against this filibuster.”

But that did not minimize the backlash Tuesday against Sinema’s defense of the filibuster.

“Sinema is a co-sponsor on the (For the People Act) bill, so one would suspect that means she is going to vote for it, but with her unwillingness to get rid of the filibuster there’s really no easy way to pass this legislation,” Kondik said.

In a prepared statement after the bill was blocked Tuesday, Sinema said she was “proud to support the For the People Act because it restores safeguards that protect every American’s right to vote, reduces the influence of money in politics” and more.

That statement was mocked by advocates like Progress Arizona, which tweeted after Tuesday’s vote that “her ‘support’ is meaningless if she won’t do what must be done to pass S.1 – end the filibuster.”

“We’re the ones that brought her into office, she needs to listen to us,” said Michael Slugocki, as he protested outside Sinema’s office Tuesday. 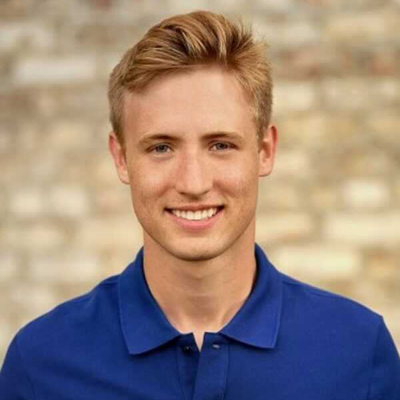 Harrison Klopp expects to graduate in spring 2022 with a bachelor’s degree in sports journalism. Klopp is participating in Cronkite News this summer.