Success in the Arizona League can be a rewarding experience for players. The AZL Rangers were among those who celebrated the experience after winning the 2019 Arizona League championship over the AZL Indians at the Texas Rangers complex in Surprise. (Photo courtesy of Bill Mitchell) 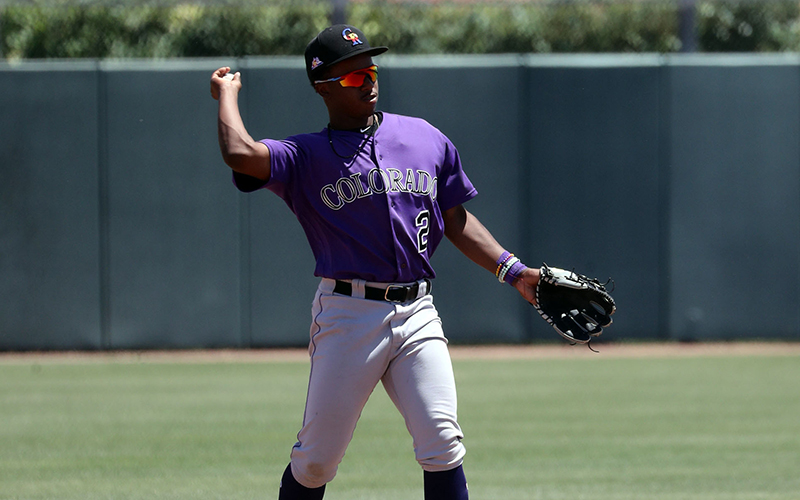 Adael Amador of the Colorado Rockies plays in an extended spring training game at Fitch Park recently in Mesa in preparation for his first official game this summer in the Arizona League. (Photo courtesy of Bill Mitchell)

PHOENIX – The Arizona League, hosted during the summer at spring training complexes across the Valley, is at its heart a rookie league. While not every player on every team’s roster is a rookie, AZL teams have been populated primarily with recent Major League Baseball draftees since the league’s founding in 1988.

This year, however, the league will begin with no real rookies.

In 2019, the MLB Draft ended June 5 and the AZL began June 17. However, while MLB moved the draft to start July 11 this year to integrate it into All-Star Game festivities in Denver, the AZL schedule still begins Monday.

“Instead of it being a cohesive roster for the entirety of the summer where a couple guys shine and get promoted out of here,” said Eric Longenhagen, a Tempe-based lead prospect analyst for FanGraphs, “it is going to be a one-month type of league, and then the draft picks will enter the fray and the makeup of the league will shift to look like it normally would.”

The new timing of the draft isn’t the only factor altering the course of this year’s Arizona League – and by extension the other so-called “complex leagues,” the Gulf Coast League in Florida and the Dominican Summer League.

One condition of the 2021 restructuring of Minor League Baseball was the elimination of short-season Class A leagues, which provided a typical intermediate step between complex leagues and full-season Class A affiliates. Longenhagen said this means players can jump from the AZL directly to Class A, where clubs might have to make room for them by releasing members of their Class A rosters. 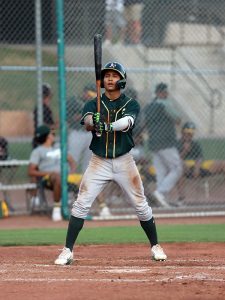 Brayan Buelvas turned 17 shortly after being promoted from the Dominican Summer League in June of 2019, and is now one of the Athletics’ top 10 prospects and is playing for the A’s Low-A affiliate in Stockton, California. (Photo courtesy of Bill Mitchell)

“I think you’re going to see situations with a number of clubs where when they activate drafted players, guys will get released,” he said.

As part of the restructuring, he noted, organizations are now limited to a total of 180 domestic players. The Athletics operated two AZL teams in 2019 after expanding their Latin American interests, but Sprague said that due to the 180-player cap, with 41 or 42 healthy AZL-caliber players, they are now “stretched a little bit thin” to have two teams, and will field just one squad at Fitch Park this summer.

The effects of the reorganization also overlap with those of the pandemic. For one thing, COVID-19 led to a shorter, five-round draft in 2020, compared to the usual 40 rounds. This cuts out some of the AZL player pool for 2021, according to MiLB senior communications director Jeff Lantz.

“A lot of times, the guys that were appearing in the Arizona League or the Gulf Coast League were guys that were picked in the 10th, 12th, 20th round, whatever, that decided to sign instead of go to college or continue on at college,” Lantz said.

Most notably, the pandemic caused the cancellation of the entirety of Minor League Baseball last year. Some prospects who would have debuted in the AZL in 2020 are starting there in 2021, and will be playing live baseball again after nearly a year of “glorified practices and scrimmages” in the fall instructional league, minor league spring training and extended spring training, Longenhagen said.

However, other potential AZL players have moved past complex leagues entirely in the intervening months.

Players beginning their careers in Class A have missed out on the AZL’s unique low-scrutiny environment, in which they can hone their game without much attention from fans or media, while getting acclimated to the daily grind of professional baseball. It’s a great place to develop a new pitch or get used to swinging a wood bat while playing every day, Lantz said.

“When you’re a high school player, you’re playing two, three times a week, probably at max,” Lantz said, “and when you get to pro ball, it’s usually six times a week.”

He added that complex leagues provide a chance for new players to practice proper sleep and dietary habits. Longenhagen took it a step further, saying that players who bypass complex leagues are losing a “cultural way station.” For extremely young players coming out of the Dominican Republic, he said, the AZL and GCL provide a chance to get acclimated to U.S. culture, in areas where many still speak Spanish.

These young players, with many years of team control ahead of them, could be important trade chips in deals around the deadline, which is July 30 this year. But with the draft occurring mere weeks before, Longenhagen said that the window to evaluate such rookies is vanishingly short.

One other difference in this year’s AZL will be immediately apparent on the field: the presence of the Rockies. Colorado previously operated two short-season clubs in Boise and Grand Junction and was the only team without an AZL or GCL affiliate, Lantz said. After the reorganization, the Rockies will run a team out of Salt River Fields at Talking Stick in the AZL, just as they do during spring training.

“There are just logistical pieces to this, and very specific intricacies,” Longenhagen said, “that we can only learn via trial and error, I’m sure, that the Rockies will now have to learn.”

But what is the competitive outlook for the AZL this year? Who will follow the 2019 Rangers as champions?

“The wins and losses in the complex leagues aren’t really the biggest deal,” Lantz said. “It’s part of it, but at the end of the day, you’re trying to become a better player.”

But Longenhagen said he’s still excited to see the prospects compete in the playoffs at the end of the summer – when, of course, they begin in mid-September rather than late August.