Schools from across the country, including St. Mary’s and Mountain Pointe in Phoenix, will be participating this weekend in the Section 7 basketball tournament at State Farm Stadium. (File photo by Alina Nelson/Cronkite News)

PHOENIX – Nearly 200 high school basketball teams from across the West this weekend will squeeze onto 12 courts for the return of the Section 7 tournament.

The event played out in 2019 at high schools across the Valley and was postponed in 2020. It runs Friday through Sunday at State Farm Stadium in Glendale.

The goal of Section 7 is to provide an opportunity for athletes to play with their high school teams in front of college basketball coaches. It shares its name with the National Federation of State High School Associations region that includes Arizona. The tournament debuted in 2019 after the NCAA designated two June weekends for “scholastic events” in response to recommendations from the Rice Commission on College Basketball.

There will be no shortage of college coaches at this year’s tournament; the Section 7 website touts more than 400. And although they hail from all levels of competition, many represent Division I schools, including such luminaries as Gonzaga University and nine Pac-12 schools.

This exposure will be critical for players like Jack Payne, a senior guard for Owyhee High School in Meridian, Idaho, one of two teams representing the Gem State.

“It means a lot to me that I even have this chance,” Payne said. “A lot of people don’t get this chance, especially from Idaho.”

The opportunity is important more broadly for Owyhee, a school that has yet to open, with a team that played its first games together just weeks before the Section 7 tournament. Coach Andy Harrington said the team’s talented roster and his track record from Middleton High School, along with prior connections, helped the Owyhee Storm earn an invite from King.

“Idaho kind of gets downplayed because it’s a smaller state and a lot of people don’t know where it is, but there is some good basketball here,” he said. “I’m hoping that we can go represent.”

The Storm will have a daunting road ahead, as their bracket features such Arizona stalwarts as Salpointe Catholic High School in Tucson. Harrington and Payne said they’re excited to face out-of-state competition and build cohesion heading into next season.

Cohesion is critical even for reigning state champions. Sunnyslope High School, fresh off its first 6A championship victory, has plenty of work to do this summer, Vikings coach Ray Portela said.

“You have certain players back, but you never know how they’re going to react or work with certain new members of the team,” he said, “so it’s definitely a challenge.”

Portela said Sunnyslope winning its 2019 bracket at Section 7 helped his players attract attention. Since then, many players have missed potential recruiting opportunities because of the COVID-19 pandemic, bolstering the importance of Section 7 this summer.

“(Recruiters) couldn’t leave their campuses, it just kind of slowed everything down, and just stopped the kids from being seen,” he said.

Besides being much more convenient for the college coaches, Portela said, playing in State Farm Stadium is a unique opportunity for the athletes. One out-of-state rival from his team’s bracket agreed.

“Definitely just got a little bit of a wow factor,” said Strake Jesuit coach Dominic Amorosa, “to be able to play in a stadium that hosts Super Bowls and Final Fours and big-time events.”

Strake Jesuit, from Houston, is the only team in the tournament from Texas. Amorosa said Section 7 is important for both juniors and seniors on his team.

Sunnyslope and Strake Jesuit are part of the Juneteenth by ServRx bracket, which features steep competition, including such teams as Ribet Academy and Mater Dei High School from California, and Cherry Creek High School from Colorado. Their games begin at 7:15 p.m. Friday. The first matches start at 10:45 a.m. In total, the tournament will feature 12 divisions, one of which features 16 girls basketball teams from Arizona. 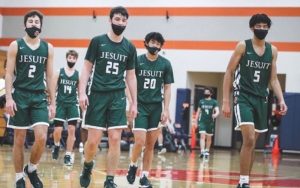 Strake Jesuit is the only team participating in Texas. Coach Dominic Amorosa believes the Section 7 scholastic tournament will give his seniors much-needed exposure before AAU competition in July. (Photo courtesy of Dominic Amorosa)

King lamented that Division I women’s coaches aren’t allowed to come and watch (the June scholastic window applies specifically to men’s basketball), and said he hopes they will be able to one day. For now, he said he still wants the event to give the girls access to a prominent venue and “elevate their experience.”

Initial tournament play continues through Sunday, and the top 32 teams will move on to an exclusive second weekend of matchups June 25 through 27 at Brophy College Preparatory.

Much of the marketing for Section 7 concentrates on State Farm Stadium, however. The venue will also host the NCAA men’s Final Four in 2024, and the organizers of Section 7 are drawing an explicit connection between the two tournaments.

“And their dream starts now.”