The arena, which has been hosting plenty of Phoenix Suns playoff games recently, will host a Rattlers game Saturday night. (Photo courtesy of the Arizona Rattlers) 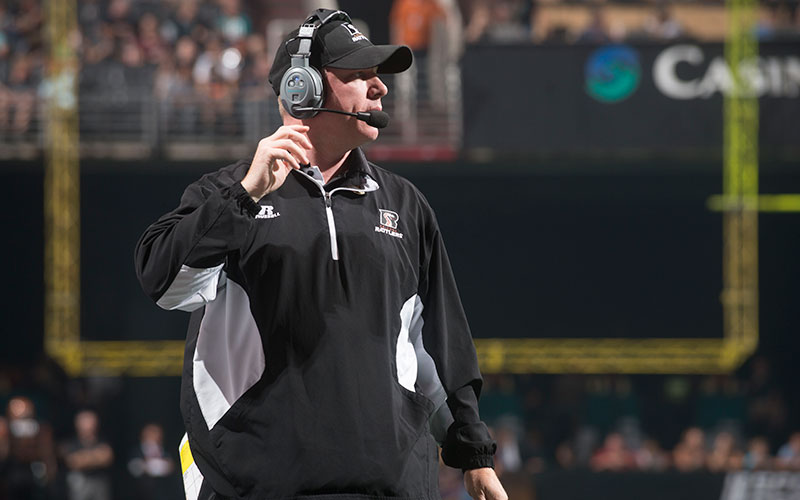 Arizona Rattlers head coach Kevin Guy is also an owner of the Tucson Sugar Skulls. Despite this, he said the Rattlers and Sugar Skulls can’t be rivals until Tucson actually wins one of their head-to-head matchups. (Photo courtesy of the Arizona Rattlers)

PHOENIX – When the Arizona Rattlers return to Phoenix Suns Arena for their 2021 home opener Saturday night, it will be their first game there in just less than two years. Philip Rakoci, a Rattlers fan and self-described “wildlife comedian” from Casa Grande, knows exactly how long has passed.

“I did the math,” he wrote in a Facebook message. “It will have been 727 days. … No wonder I am so excited about the upcoming game.”

The Rattlers beat the San Diego Strike Force 57-16 in Phoenix on June 15, 2019, back when their venue was still called Talking Stick Resort Arena. Since then, they’ve played a pair of games at Gila River Arena (including the 2019 United Bowl championship game), lost the entire 2020 season to the pandemic and started 2021 with three road games and a bye.

Due to renovations at the downtown arena, the Rattlers had been slated to play the 2021 season in Glendale, too, before they announced in November that the project had been completed early because of the pandemic.

“While we weren’t playing, there was a $300 million transformation to the arena,” said Rattlers coach and president, Kevin Guy, “so you know, I think the players are excited to get back in the arena on our home field.” 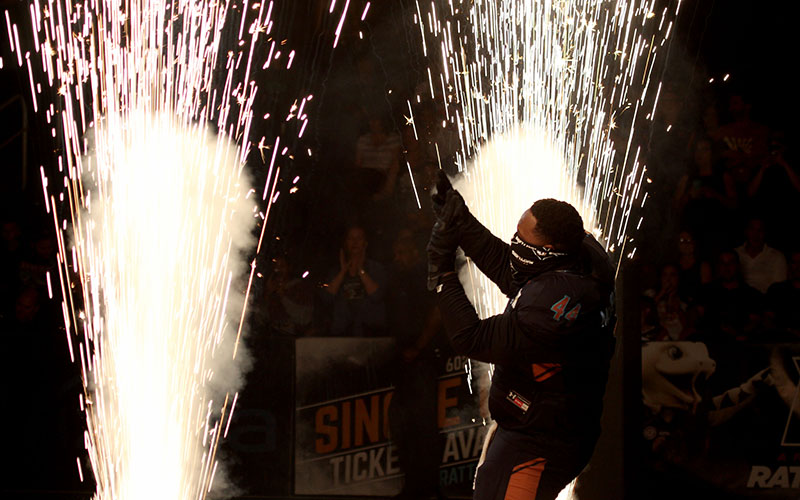 For Rakoci, who drives up to Phoenix for Rattlers games (and can also travel down to Tucson for Sugar Skulls games – “we want all the IFL teams to prosper,” he said), going to Glendale wouldn’t have made much difference. He still had reservations, though.

Brandon Houseman, an electrical technician from Mesa, said he was ambivalent about the temporary move to the West Valley.

“It happens, teams make choices on where they want to play,” he said, “but it really meant the world to me when I found out they’re coming back home.”

Houseman said he values the personal ties between players and fans in indoor football. He can rattle off a list of past Rattlers whom he befriended: Sherdrick Bonner, Calvin Schexnayder, Hunkie Cooper, Bob McMillen and Cedric Walker.

“We’ve made this a community team,” Guy said, “and our players give back to the community when they’re not playing ball.”

Between the four major professional sports leagues, college athletics, year-round baseball and golf, Guy said Phoenix is “the most competitive market in the country when it comes to sports.” The connections Houseman praised help set the Rattlers apart. “It almost looks like the players actually care more, not just about the sport, but about the fans,” he said.

“They’re chasing down a dream, and that’s something I can relate to,” said Ryan Knowles, a fellow fan and mortgage loan officer from Phoenix.

Many players see the Indoor Football League as a springboard to other opportunities. Salaries look nothing like those provided by the NFL, and it is not unusual for a player to hold another job. Others just want to extend their football careers for love of the game. 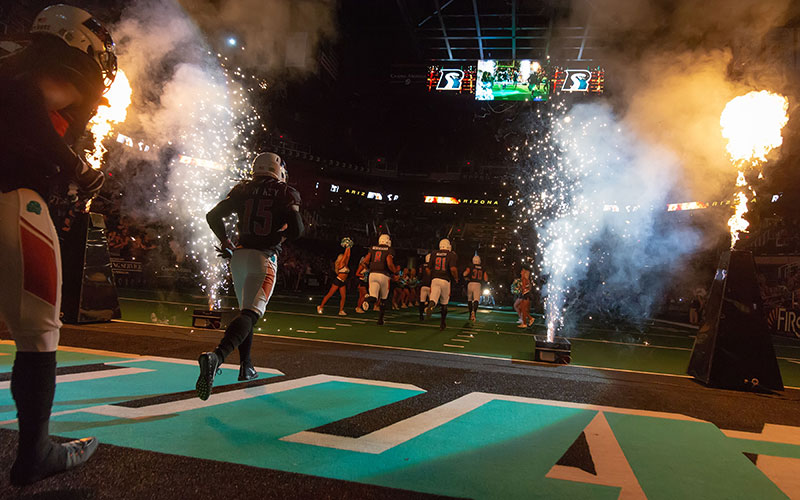 The Rattlers run onto the field at Phoenix Suns Arena before a game against the Cedar Rapids Titans on April 28, 2018. Their last home game in downtown Phoenix was on June 15, 2019. (Photo courtesy of the Arizona Rattlers)

After their 2019 United Bowl loss to the Sioux Falls Storm, which cut short an undefeated season, the Rattlers’ long-delayed revenge tour has been a mixed bag. The team picked up road wins against the Northern Arizona Wranglers and Green Bay Blizzard but lost again to the Storm in Week 2. Saturday’s matchup pits the Rattlers against the Sugar Skulls, a team Guy owns.

“They’re not a rivalry until they beat you, and neither team has beaten us yet,” Guy said.

Saturday’s game – televised as the “IFL Game of the Week” on Stadium at 5:10 p.m. – will give the Sugar Skulls their latest opportunity to see the Rattlers, and the fans their first in, yes, 727 long days.

“People want to get back to living,” Guy said, “and what better way (than) to get out and see a Rattlers game in the new arena on our home field.”