Will some events require participants to be vaccinated for COVID-19? And will parents feel comfortable with their children receiving the two-dose shot?

“I made it a point to take her down to the reservation to get the vaccination because the post-season play will involve out-of-state play,” Tanayia White, a Safford resident and member of the San Carlos Apache Tribe, said about her daughter Tashoney Kniffin.

In May, the Centers for Disease Control and Prevention authorized the Pfizer-BioNTech vaccine for 12-to-15-year-olds. Pfizer is currently running a nationwide trial for children 6 months to 11 years old.

The issue is complicated by state and local jurisdictions’ varying restrictions.

The Arizona Soccer Association – which has been on break since April with plans to resume in August – has not implemented any changes yet, said Derek Yen, ASA’s director of leagues, events and cups.

“Nothing is impacting us on the field or making our decision any different because of vaccines in May,” Yen said.

ASA is completing a strategic plan for the upcoming season, but Yen said there could be adjustments in protocols because COVID-19 information is changing daily.

David Shaffer, the Real Salt Lake-AZ North director of coaching for RSL AZ MLS NEXT, said despite the vaccine becoming available, it is not mandatory. Even before the vaccine rolled out, he said, his elite team training was fairly normal because of the organization’s ability to follow the guidelines outlined by the “country, state and ASA .”

Before the vaccine became available, some parents had their kids return to soccer practices once they felt it was safe, he said. Those decisions, then and now, don’t involve the coaching staff. 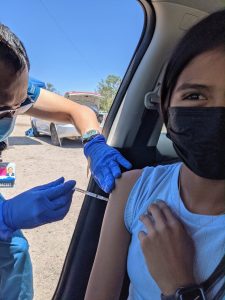 “Nobody has asked me about getting vaccinated or not,” Shaffer said. “Most of the decisions have been made by the families themselves.”

Dr. Randon Hall, a sports medicine pediatrician at Phoenix Children’s Hospital, added, “At the end of the day it is truly a personal and family decision.”

For many soccer families, summertime involves flights around the country to play in tournaments. Travel is what inspired White to bring her daughter to get vaccinated. The San Carlos Apache Healthcare Corporation event was held at a state park and open to members and non tribal members.

“The tribal hospital San Carlos has been tremendous,”White said. “They’ve been doing things to make it convenient, and one of those things was a drive-through clinic.”

The process was quick. They filled out paperwork, never left their car and in minutes received the shot. Kniffin even received a gift card and T-shirt.

Even though Kniffin, 13, dislikes shots, she received the two vaccines three weeks apart as recommended by the CDC.

“The day I got it my arm felt a little sore for a day,” Kniffin said. “But I was able to practice without any issues.”

White said she relied on scientific evidence and protocols to determine if the vaccine was safe. Her only concern was knowing what side effects to look for if her daughter had a reaction.

The CDC reports that many people don’t have side effects. But some could experience pain, redness or swelling in the region of the arm that received the vaccine. In addition, tiredness, headache, muscle pain, chills and nausea, which should go away in a few days, are possible.

“If you are feeling well and otherwise healthy after the vaccine, I don’t think there’s an incubation or waiting period in terms of physical activity,” Hall said.

He added that families having a level of suspicion with the vaccine is OK, but that it’s also important to be realistic about the vaccine. 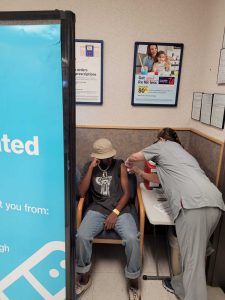 After initial hesitations, Jean Londono received his first vaccine at Walgreens. His father acknowledged he worried at first about cardiac-related side affects. (Photo courtesy of Froilan Londono)

Froilan Londono, the father of 14-year-old soccer player Jean, said his son was set to receive the shot weeks ago after learning of possible side effects. He said he was most worried about those mentioning cardiac-related issues.

But after receiving some guidance, the Londono family had a change of heart.

Whether or not one gets the vaccine is not a big deal among his team, Jean said, but acknowledged those conversations are happening. He added that some of his teammates who got vaccinated said they didn’t have any side effects. And those that did, they went away after a few days.

More than summer soccer travels, Kniffin chose to get vaccinated for a greater cause.

“I have my grandma, grandpa, and uncle, and I don’t want them to get sick from COVID,” Kniffin said.