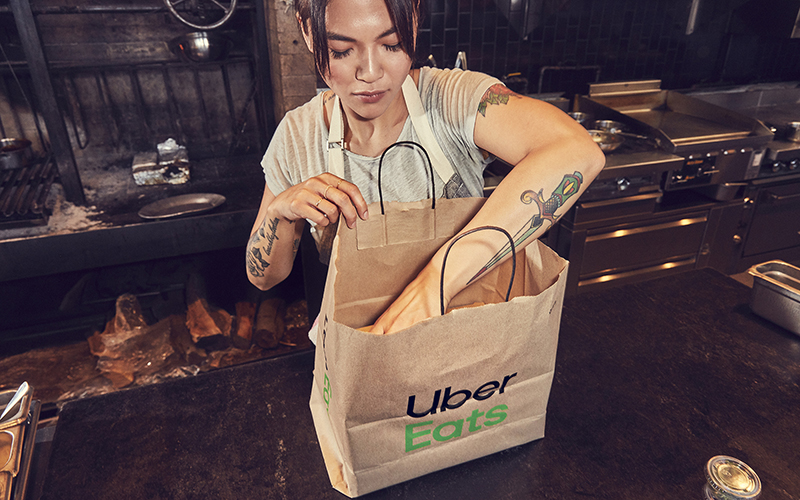 Food delivery services Uber Eats and DoorDash said they are still working to support Black-owned businesses but will no longer give them a break on fees, under a settlement with the Arizona Attorney General’s Office that called the practice discriminatory. (Photo by Justin Walker/Courtesy Uber Eats)

WASHINGTON – Uber Eats, Postmates and DoorDash said they will no longer waive delivery fees for customers who order from Black-owned restaurants in Arizona, to settle charges by the state that the deals violated the Arizona Civil Rights Act.

The agreement, announced Wednesday, settles a claim by the Arizona Attorney General’s Office that waiving fees just for Black-owned businesses “unlawfully discriminated against non-Black owned restaurants and their patrons.”

The companies “adamantly deny any wrongdoing” in the promotions, which were announced last summer at the height of the Black Lives Matter movement. The deals ended in December, as scheduled, but the companies said they will continue working to support Black businesses through such efforts as identifying Black-owned restaurants in a separate category on the apps.

“We’re proud to have supported Black-owned businesses and we’ll continue to make it a priority,” an Uber spokesperson said Wednesday. “We have heard loud and clear from consumers that the ability to easily identify Black-owned restaurants on Uber Eats is a feature they want and appreciate.”

Attorney General Mark Brnovich did not respond to a request for comment Wednesday, but in a prepared statement he said his office took the action “to protect civil rights and ensure businesses offer their services and products based on equal and neutral criteria.”

“Even with the best of intentions, corporations can do the wrong thing,” Brnovich’s statement said. “Altering the price of goods or services based on race is illegal.”

But company officials defended the programs that they said came at a time of particular need for the Black community.

“Furthering the long tradition of public and private sector efforts to break down barriers, DoorDash is proud to support Black-owned businesses and honored to do our part to lift up those who need it most,” Bennett said.

A report released in April 2020 by the Federal Reserve Bank of New York showed that at the onset of the pandemic, 21% of Black-owned businesses were categorized as financially distressed, compared to 5% of white-owned businesses.

Under the programs, people who ordered from Black-owned restaurants partnered with the three delivery apps would not be charged a delivery fee for their order. An employee who answered the phone Wednesday at Caribbean Palm, a Black-owned restaurant in Scottsdale that partners with DoorDash, said he believes the waived fees “did increase business.”

Kiana Maria Sears, president of the East Valley NAACP, called that sort of support “critical” to Black businesses “because it will be the foundation of economic justice for the African-American community.”

Ricardo Carlo, president of the Associated Minority Contractors of Arizona, said minority-owned businesses often struggle to compete on the open market because of erroneous preconceptions.

“What happens is they (customers) see that they’re a minority firm and think that the quality is not there, when in reality the quality is there and even better,” Carlo said.

The settlement calls on the state to drop its charge against the delivery companies. In exchange, the companies agree that “all charges and/or discounts to any items, goods, and/or services offered … will be without regard to the race, color, religion, sex, national origin or ancestry” of the business owner.

Both agreements – one with DoorDash and one with Uber Eats and Postmates – include explicit statements that the settlement does not constitute an admission by the companies that they did anything in violation of the public accommodations law. The agreements also say that no findings of fact were made, but the companies agreed to settle to avoid the costs of litigation.

Bennett said that DoorDash is “ready to put this dispute behind us and return our focus to enabling equitable access to the merchants, Dashers, and customers we serve.”

“We all have an obligation to elevate and support underrepresented communities, and we look forward to continuing to do so in Arizona and beyond,” he said.