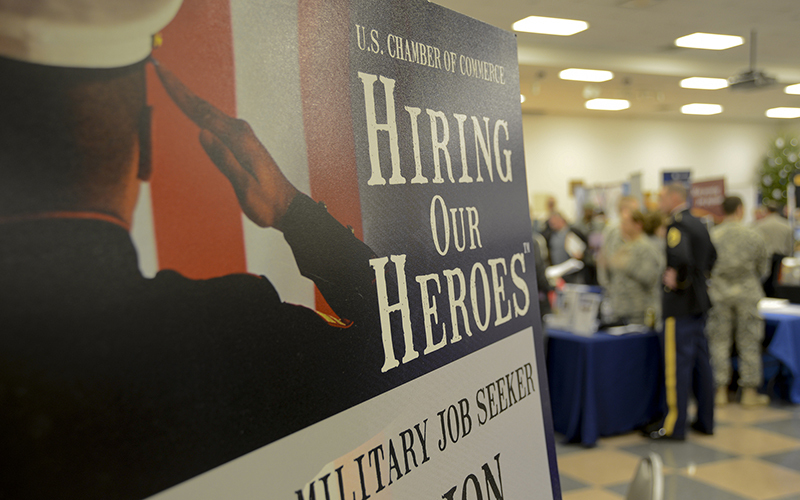 Veterans as a whole are more likely to be employed, and often in better jobs, than the general population, government reports show. But even veteran joblessness rose during the COVID-19 pandemic shutdown, bringing calls for improved programs for transitioning to civilian life. (Photo by Tom Cherry, Pennsylvania National Guard/Creative Commons)

WASHINGTON – An employment program for veterans that began in the days after 9/11 paid off last year when the COVID-19 pandemic rattled employment for vets in the state and across the country, an advocate told House lawmakers Wednesday.

“Communities in Arizona are no different than communities across the United States. We have seen the significant impact of the pandemic on service members, veterans and their families,” said Thomas Winkel, director of the Arizona Coalition for Military Families.

What is different in Arizona, Winkel said, is that public and private organizations have been working together for years now to establish “a robust and sustainable effort to assist veterans with securing meaningful employment.”

Winkel was part of a panel testifying at a House Veterans’ Affairs Committee hearing on veteran employment during the pandemic.

Like all other sectors, veteran unemployment rose sharply in 2020 – although it continued to be lower than jobless for the general population nationally. But witnesses said there is still room for improvement in government programs that are supposed to help soldiers transition from military to civilian life.

Chris Thorne, co-chair of the Military Affairs Advisory Council at the North San Diego Business Chamber, said employers are eager to hire vets, but that too often the transition process “does not adequately prepare transitioning service members for what comes next.”

“To put it quite simply, transitioning service members are walking into a foreign culture that speaks different languages, acts different ways and values different outcomes,” Thorne said in his written testimony. It’s not enough to merely identify a job that requires a skill set learned in the military, he said.

The unemployment rate for veterans nationally jumped from an average of 3.1% in 2019 – with rates as low as 2.9% at one point during the year – to 6.5% over the course of 2020. Witnesses said the national veteran jobless rate got as high as 11.7% at the height of the pandemic.

Still, veterans did better than the overall workforce in those years. The Bureau of Labor Statistics said average unemployment rose from 3.6% for the general labor force in 2019 to 8.0% last year.

But better national averages did not mean some vets were not suffering, Winkel said.

“Unemployment, underemployment and reduced hours have resulted in increases in food insecurity, as well as requests for assistance with housing, utilities, transportation and other essential needs,” he said.

Servicemembers line up at a job fair in Florida in this 2015 photo – a sight rarely seen in 2020, when COVID-19 made most such job fairs virtual events. (Photo by Capt. Jamie Padgett, Sgt. John L. Carkeet IV, 143d ESC/Creative Commons)

Jeremy Villanueva, the assistant national legislative director for Disabled American Veterans, said his group last year “hosted 92 job fairs, with 63 held entirely online – an increase of the 12-15 virtual job fairs that DAV had hosted annually prior to the pandemic.”

Winkel said the challenge of virtual job-hunting has had an upside for some vets, opening up opportunities for networking and career preparation that were not there before. It has also introduced employers to the benefits of remote work, which is ideally suited to many military spouses, he said.

“Some veterans have become more proactive in seeking out educational opportunities like certifications and credentialing to improve, or upskill, their career potential,” Winkel said.

Amy Bolton of the Arizona Coalition for Military Families said the coalition views the issue of veteran unemployment in Arizona as well-managed, but added that, “We don’t reach every veteran, so we’re not going to stop until we do.”

Winkel said it helps that the coalition has been working at it for more than a decade, growing to “serve all military members, veterans and family members, with a network of over 200 Arizona veteran-supportive employers and over 450 partner organizations, that provide over 3,000 resources.”

The state and federal initiatives, services, programs and resources offered to Arizona veterans are compiled in one network called Be Connected, which Winkel said provides “a data-driven and human-centered approach to advancing economic opportunity.”