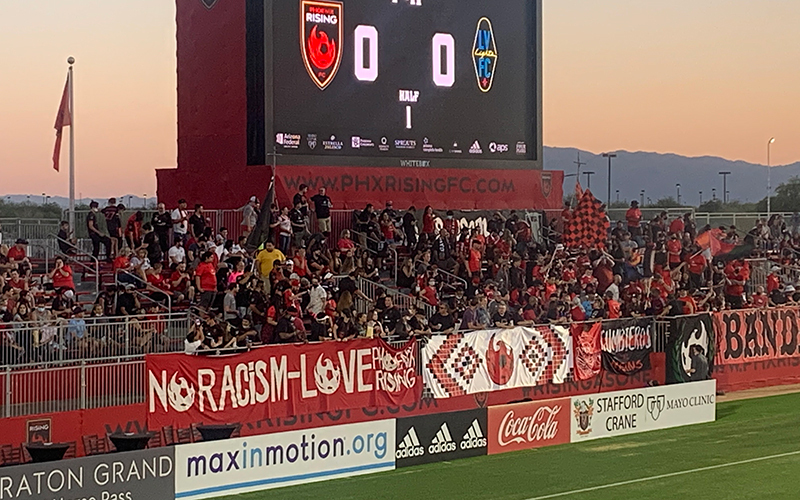 Members of the Los Bandidos supporters group were happy to return to celebrating Phoenix Rising FC inside a stadium after the COVID-19 era sometimes left them cheering in the parking lot. (Photo by Taiwo Adeshigbin/Cronkite News)

CHANDLER – Phoenix Rising FC’s 5-1 victory over Las Vegas on Mental Health Awareness night brought fans to their feet and was a welcome environment for many who felt isolated during the past year.

Season-ticket holder Linda Robinson, 73, attended the Saturday night match with her husband, P.J., and said she felt connected yelling and cheering with other fans.

“It is such an outlet where we can come and express how we feel,” she said. “The energy truly allows you to open up because we are all like family.”

During 2020, COVID-19 forced many sports fans to cheer from their living rooms, leaving some to watch alone or with just a family member.

In 2021, Mental Health America ranked Arizona 21 out of 50 states for its 19.2% prevalence of mental illness among adults.

“The only salvation for me was I had seven dogs,” Robinson said about her experience staying at home.“ I played ball with them twice a day. It kept me active and everyone out of trouble.”

Luigi Napoli, 56, drove over an hour to Wild Horse Pass Stadium, which was at 50% capacity (approximately 5,000 fans), to watch soccer, a sport popular in his native Italy.

“It is a completely different experience watching it at the stadium,” he said. 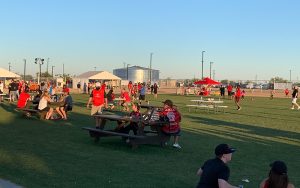 Napoli called the experience a “personal one” that forms a deeper connection with the team and spectators thanks to the sounds echoing in the stadium, the conversations with the other spectators and the ability to speak with players.

Soccer benefits the well being of anyone, regardless of their age, Napoli said.

“One of the best ways to keep on having a healthy body is to play sports, especially a team sport like soccer,” Napoli said.

For one spectator, his eyes were fixed on two soccer games as he sat in the stadium, catching glimpses of the Rising and a LIGA MX semifinal game on his phone.

“Being here and watching my team on the phone, it’s just what I do,” Luis Munoz said.

Munoz, 33, said he was watching two games because his team, Cruz Azul in the Liga MX, the top professional league in Mexico, made it to the finals.

He has seen the impact the sport has had on his child’s life. Without sports and the ability to attend events, he saw his son lose motivation.

However, since the first home match this season, Munoz has seen many positive moments – especially after a goal celebration – that has helped bring smiles to many.

“It’s really healthy to experience that emotion when the team scores a goal,” Munoz said.

Rafael Sanchez, a part of Los Bandidos since 2017, said compared to last season – when members parked outside the fence to watch the game — many feel a sense of belongingness again now that they have returned to the section behind the goal.

The group’s ability to find creative ways to remain connected, including “cheering the team on television, buying a jersey and engaging in the group chats,” helped combat the loneliness many felt last year, Sanchez said.

“This is like a second family for some of us,” he said. “Even though we can’t be there all of the time, at least, to have one day of the week to feel like someone cares about them is important.”

That means even more Phoenix Rising fans will be able to attend the June 5 match against San Diego Loyal FC. The stadium will be open at 100% capacity.