Crowds clash with police and security forces outside the Capitol on Jan. 6, after thousands of then-President Donald Trump’s supporters marched from a “Stop the Steal” rally to the Capitol where lawmakers were certifying President Joe Biden’s election. (Photo by Brendan Smialowksi/AFP via Getty Images)

WASHINGTON – The House voted Wednesday to create a bipartisan 9/11-style commission to investigate the deadly Jan. 6 insurrection at the Capitol, despite the opposition of 175 Republicans, including all four from Arizona.

The 252-175 vote included 35 Republicans who crossed the aisle to join 217 Democrats in support of the bill that would create a 10-member commission, evenly divided between parties, to investigate the facts, causes and factors that led to the Jan. 6 attack on the Capitol.

Thousands of supporters of then-President Donald Trump who were in Washington to a “Stop the Steal” rally marched from the event to the Capitol, where lawmakers were certifying the results of President Joe Biden’s election.

The mob eventually fought its way through police lines and breached the Capitol, roaming the halls for hours and temporarily halting the election certification as lawmakers were whisked to safety. Five people ultimately died in that attack, including a Capitol Police officer, and more than 100 were injured in the hours of fighting.

Opponents of the bill, like Rep. Debbie Lesko, R-Peoria, condemned the Jan. 6 attack as “inexcusable,” but said in a statement after the vote that she feared the commission would be used “as a political tool against Republicans.”

Other Arizona Republicans – Reps. Andy Biggs of Gilbert, Paul Gosar of Prescott and David Schweikert of Fountain Hills – did not respond to request for comment Wednesday on their votes. But Biggs tweeted a video earlier in the day in which he called the bill a “partisan attempt to continue the false narrative of the left,” while Gosar has tweeted video clips showing rioters in the Capitol urging others to cooperate with police.

Rep. Raul Grijalva, D-Tucson, accused Republican opponents of trying to “rewrite history and deny that the insurrection even happened.”

“Like the former president they blindly follow, these members are deliberately misleading the American people and amplifying the dangerous conspiracy theories that led to the Jan. 6 attack,” Grijalva said in a prepared statement.

Some opponents charged that investigating the attack on the Capitol alone is not enough, arguing that any such commission should also include other civil disturbances of the past year in its probe, pointing to Black Lives Matter and antifa protests that they said have caused property damage and injured civilians and police.

“If we’re concerned about the danger police officers were in on Jan. 6, and they certainly were, then why don’t we have that concern for the dangers, the violence, the injuries, the deaths that have been faced by police officers across this country?” asked Rep. Dan Bishop, R-N.C., during floor debate on the bill. 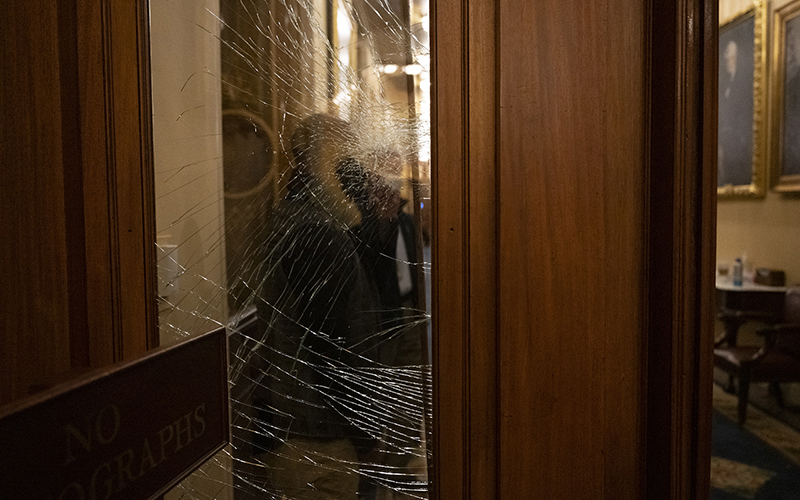 The commission would have the authority to issue subpoenas, but all decisions on hiring, spending and the issuance of subpoenas would have to be agreed to by both sides of the commission. It would have until Dec. 31 to present its final report on what happened on Jan. 6, with recommendations on how to keep it from happening again.

“Today’s bill forming the national commission examining the tragedy of Jan. 6 is critically important, it’s what we owe the American people and the U.S. Capitol Police officers who risked their lives for members of Congress,” said Rep. Greg Stanton, D-Phoenix.

The fate of the commission bill in the Senate is unclear. The House, meanwhile, is expected to vote Thursday on an emergency $1.9 billion appropriation to improve security in and around the Capitol.

Included in that bill is a Stanton proposal to equip Capitol Police officers with body cameras, which he said are best practice for law enforcement throughout the country. Stanton said the $8.6 million he is seeking for police body cameras would aid in evidence gathering and prosecution in any future confrontation.

“It’s important that this commission examine in detail the events that led to events of Jan. 6 so that it can never happen again,” Stanton said.