Coyotes goaltender Adin Hill spent most of the first half of the season on the taxi squad. Since his call-up, Hill has stepped up as the team’s go-to guy in goal. (Photo by Alina Nelson/Cronkite News)

PHOENIX – Three years ago, Conor Garland earned his call-up from the Tucson Roadrunners.

Within the first two months of his rookie season on the Arizona Coyotes, Garland made an immediate impact, scoring goals left and right, including one off his face – a testament to his hard-nosed character.

Even before that, Garland knew he didn’t have much time to make a difference in the lineup.

“I knew I wasn’t going to get many chances,” said Garland, who has 31 points in 43 games during his third season with the Coyotes. “I knew I couldn’t have too many bad games. I played those 50-so games that year like Game 7s. I was exhausted after that season. I had some bad nights, but I’ve given it everything I have.”

It’s those types of mindsets that Coyotes coach Rick Tocchet has searched for throughout the shortened 2020-21 season, and his fortunes have been working.

Following a season-long, nine-game road trip, the Coyotes remain in the thick of the Honda West Division playoff race, a point behind the St. Louis Blues for the fourth and final postseason spot.

But the team wouldn’t be where it’s at without the help of the newly constructed taxi squad. 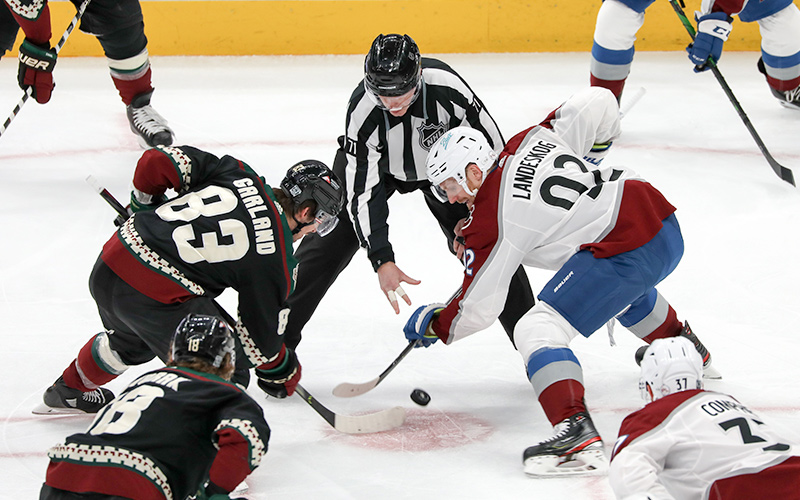 “We’re a scrappy team in the sense that sometimes we don’t look pretty, but we have contributions from 1 to 21,” Tocchet said of his team’s identity. “Hilly (Adin Hill) is battling and holding the fort until we get some other guys back. I think we’re a team that needs everyone to give us an inch. For the most part, most guys have contributed game in and game out. That’s really important for our team.”

Players on taxi squads can be put on active NHL rosters by 5 p.m. ET on game days, providing teams a better chance to roll out four forward lines, three defensive pairings and two goaltenders in the event of injuries or positive COVID-19 cases.

Coyotes goaltender Adin Hill has stepped up in the wake of injuries to Arizona’s top-two options between the pipes in Darcy Kuemper and Antti Raanta.

Although Raanta returned Wednesday in a 5-2 loss against the Minnesota Wild at Xcel Energy Center, Adin Hill has maintained a steady 2.89 goals against average and a .908 save percentage in 15 games, which is among the league leaders since his call-up.

“Hill has been a great surprise for us,” Coyotes general manager Bill Armstrong said in a press conference on Monday following the National Hockey League’s trade deadline when the team made no moves. “It’s a huge workload for him to go in as pretty much a first-year goaltender and now it’s a great experience for him. We’ve learned a lot from him. He’s given us a chance to fight for this playoff spot.”

In his first game this season, Hill was thrusted into a relief appearance when Kuemper allowed three goals on 21 shots as Arizona trailed 3-0 after 40 minutes against the last-place Anaheim Ducks on Feb. 24 at Gila River Arena.

Tocchet sought a spark early into the third period, and sent out Hill, who had been waiting patiently on the taxi squad for his first opportunity this year.
“I grabbed my helmet and stick and just hopped out there,” said Hill, who made 14 saves on 14 shots that night. “It could have been difficult, but the guys stepped up as soon as I went in there. We battled back there.”

The Coyotes bounced back with three straight third-period goals, and Hill made an uncanny save to prevent the Ducks from celebrating in overtime before Coyotes forward Christian Dvorak scored the shootout winner with his signature finish.

Since then, Hill has started 14 of Arizona’s 26 games and has accumulated the team’s last six wins.

Coyotes goaltender Ivan Prosvetov, Arizona’s fourth-string goalie who played with Tucson and the Rapid City Rush (Arizona’s ECHL affiliate) last year, made his first career NHL start Monday in a 4-2 loss to the league-leading Colorado Avalanche, and was excited to get the nod, even during the tough circumstances.

“My team was really supportive and they did a really good job in front of me,” said Prosvetov, the Coyotes’ fourth-round 2018 draft pick. “It was a great first start. For sure, I was very excited about it. I had been waiting almost my whole life”

Prosvetov had been practicing primarily with the rotating six taxi squad members, which has made it difficult to stay in a game-ready mindset.

“It’s tough to prepare your body because you’re not playing as much,” Prosvetov said. “You just have to work hard and get a little lucky, but good things happen when you work hard.”

Coyotes forward Michael Bunting has been the recent beneficiary of a hard-working mindset and his goal-scoring outburst has instantly brought an uptick in the Coyotes’ offense.

Since his call-up from the taxi squad on March 27th, Bunting has tallied six goals and seven points in his first eleven games, which have all been on the road.

“He’s underrated in the sense that he’s got a really sneaky shot and some sneaky speed,” Tocchet said after Bunting scored his first career hat trick in a 5-2 win against the Los Angeles Kings on April 5th. “He’s a guy that goes to the net. … All these goals, they’re 15 feet from the net. He’s not afraid to get in front of some people’s faces. He’s definitely added a net-front presence with a sneaky shot.”

Bunting played over 300 games in Tucson before earning a chance at the highest level this season. The forward, 25, has been grateful for his current ice time with the Coyotes.

“It’s been quite the road to get here,” said Bunting, who has five goals in his last seven games. “I talk with (Tucson Roadrunners coach) Steve Potvin a lot. He always says to take it day by day… I just got to keep this rolling and keep playing my game to be able to help stay in this lineup for the playoff push. I think we’re more than capable of doing that.”

Bunting’s maturity with the Coyotes has helped him pursue a physical edge when scoring goals and making plays in the offensive zone.

“I’m very happy with where my mindset is, and I just got to keep taking it day by day,” said Bunting, who was selected as a fourth-round draft pick in the 2014 NHL draft. “I’m just going to stay focused and stay on my game plan.”

Bunting and Garland were teammates on the Roadrunners during the 2018-19 season. Now, they’re linemates as part of the Coyotes’ rejuvenated top-six forward core.
“He’s an easy guy to play with,” Garland said. “Me and him have some similar qualities in our game. We feed off each other pretty well. … He’s a sticky player. We both like to retrieve pucks. He’s a competitive guy, someone I played a lot of hockey with.”

“We’ve picked up where we left off up here,” Bunting added on his chemistry with Garland. “It’s fun playing with him and Schmaltzy (Nick Schmaltz) up the middle, it’s even better. I just get open, make space for them and bury my chances.”

Forward Lane Pederson, an alternate captain with Tucson, has also made his presence felt with a goal in four games since his early April call-up. That goal came in his NHL debut on April 3rd when Arizona defeated the Ducks 4-2 at Honda Center.

Lane Pederson's first NHL goal ever and the #Yotes tie it up. pic.twitter.com/iuFTKpHgZg

The Coyotes wrapped up their road trip on a five-game losing streak, but have maintained their current position in the divisional race, which has tightened with the San Jose Sharks and Kings now suddenly with postseason chances in the final three weeks of the regular season.

When Arizona returns home Saturday for its final regular-season game against St. Louis, the team will play seven of its remaining 12 games in front of the increased attendance at Gila River Arena, which is now up to 7,900 fans with COVID-19 protocols and safety measures still in place.

On the ice, Tocchet’s eyes are fixated on receiving more from his primary scoring sources, such as recently cold top-six forwards Clayton Keller and Christian Dvorak, during the upcoming three-game homestand.

The call-up contributions have certainly increased their much-needed depth scoring, but the fourth-year coach is calling on his main stars to rise to the occasion with a back-to-back postseason berth hanging in the balance.

“You’re always looking for depth to contribute, but you’re also looking for other guys to contribute,” Tocchet said. “We need some of them to start putting more pucks into the net for us and make some big plays. That’s really what it comes down to. For the most part, our effort is there. We just need more of those big moments.”