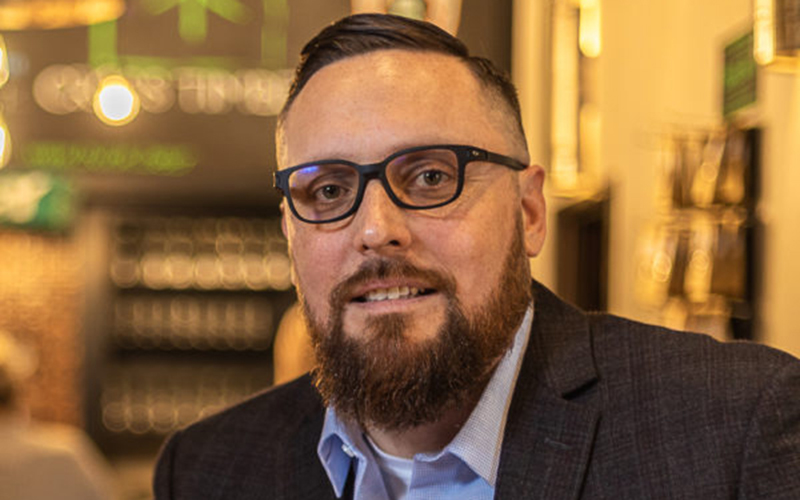 Jacob Keyes, a member of the Iowa Nation, opened SkyDance Brewing Co. in 2018 in honor of his father. Since then, the brewery has been operating out of a co-op – a single location where multiple companies use the same equipment – in Oklahoma City. The new taproom and brewery are under construction in the historic Automobile Alley north of downtown.

SkyDance produces five brews, along with a few seasonal beers, such as Sovereign Nation, inspired by the United States’ recognition of tribes as sovereign nations. The beer is distributed to gas stations and small bars in the Oklahoma City area.

Keyes said he and his father had always wanted to open their own brewery. One day, Keyes found one of his father’s beer recipes and made a batch. His friends insisted he enter it into a competition, which he won. That evening, Keyes’ brother called him to say their father had died.

“I felt like it was a sign I had to start the brewery,” said Keyes, who’s from Purcell, Oklahoma, and has been involved with the Iowa tribe since he was young. Before starting the brewery, he worked in the casino industry.

“If it wasn’t for the work I did in the gaming industry,” he said, “I would not have seen all these Native Americans owning and operating their own businesses. It really helped encourage me to do the same.”

Keyes said he had some mental hurdles to jump before he could fully commit to opening his own business.

“We’re told that … Native Americans aren’t meant to participate in the business world,” he said. “We need to overcome that mindset. I had to.”

Throughout the COVID-19 pandemic, SkyDance Brewing has experienced challenges, Keyes said. First, employees no longer could interact with customers directly.

“We have to sell all our beer through a bunch of middlemen now,” Keyes said. “We’ve taken a direct hit to our profits.”

Second, operating out of the Brewers Union co-op became even more difficult, he said.

SkyDance was among many small businesses facing challenges during the pandemic, which spurred the Greater Oklahoma City Chamber of Commerce to offer some loans and grants.

“Minority businesses were some of the ones hit the hardest when the pandemic began,” said Eric Long, research economist for the Chamber of Commerce. “Small businesses were hit especially hard.”

“Small business is really frail,” said Jeff Seymour, the chamber’s executive vice president. “We need to help small businesses be more flexible, nimble and reactive in times like this.”

The chamber assisted businesses with 25 or fewer employees, and a majority of owners were racial minorities.

“Moving the city forward through small businesses is what we want to do here,” said Harve Allen, public relations manager for the Chamber of Commerce. “It’s the key to success.”

Native American-owned businesses and tribes have provided a significant amount of economic activity in Oklahoma in the past several years, according to an Oklahoma City University study. In 2018, tribes provided $12.9 billion in goods and services to Oklahoma.

Native American-owned businesses provide 96,177 jobs in Oklahoma, according to the National Congress of American Indians.

Keyes said most of his support has come from Native American resources.

“I got a loan from the Bureau of Indian Affairs long before I could get a federal or state loan,” he said. “All the other loans I applied for were put on hold, but this one came quickly and helped the most.”

Despite the challenges faced over the past year by all businesses, Keyes is excited for the future.

“When we open this new location, we’ll have a showroom for Native American art. A lot of our beers will be named after (Native American) dances, too. This is our chance to teach people
about our culture.”