Chris Luna chants traditional hymns at a protest in Phoenix in February, when members of the group Apache Stronghold rallied on the eve of a hearing on their suit to block a copper mine that they say would destroy sacred lands at Oak Flat. The judge rejected their petition, but the project has been put on hold by the Biden administration. (Photo by Alberto Mariani/Cronkite News) 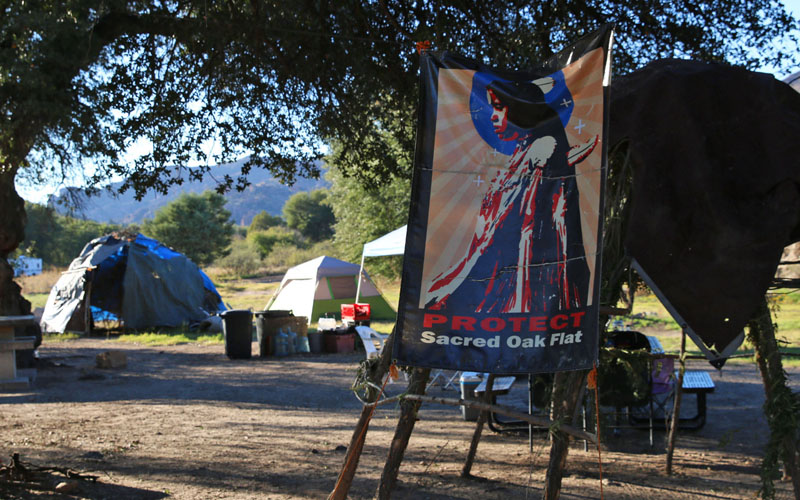 Opponents of the proposed Resolution Copper mine at Oak Flat have been fighting the project for years, from lobbying in Washington to members of the San Carlos Apache Tribe setting up a camp near the entrance of Oak Flat campground in this photo from 2016. (File photo by Bri Cossavella/Cronkite News)

WASHINGTON – The Sikh Coalition and the San Carlos Apache would not appear to have much in common at first glance, but they have found a shared interest in the fight over a patch of land in southeastern Arizona.

That’s where the federal government is considering whether to turn sacred Apache land over to a mining company, whose plans for the site would “obliterate” the ability of tribal members to worship there, in the words of one federal judge.

The prospect has turned an environmental fight over the mine into one over religious rights, and drawn a diverse cast of supporters to the Apache cause. In addition to the Sikh Coalition, court briefs supporting the tribe have been filed by the Church of Jesus Christ of Latter-day Saints, the Jewish Coalition for Religious Liberty and the International Society for Krishna Consciousness, among others.

“It seemed that our interests were really closely aligned here, as a civil rights organization that seeks to protect a religious community,” said Cindy Nesbit, senior staff attorney for the Sikh Coalition. “We were definitely concerned by the court’s interpretation.”

The court she is referring to is the U.S. District Court for Arizona, where Judge Steven P. Logan ruled in February that while the mining project “will affect the Apaches’ religious practices deeply,” the government was not violating their First Amendment rights by turning the land over for mining.

It is the latest twist in a years-long fight over one of the richest potential copper mines in the country, a project that could bring hundreds of jobs to Pinal County and spur billions of dollars of economic activity over the expected 60-year life of the mine. Resolution Copper, the company developing the mine, estimates that it could eventually supply a quarter of North America’s demand for copper.

The project got a boost in December 2014, when then-Sen. John McCain, R-Ariz., inserted language in the must-pass Defense Department budget bill that would transfer 2,422 acres of copper-rich federal land to Resolution Copper, in exchange for 5,459 acres from the mining company.

The land swap could not go through until government agencies completed reviews of the environmental and cultural impact of the proposed mine. The U.S. Forest Service said it finished the last of those reviews, a final environmental impact statement, on Jan. 15, starting the clock on a 60-day countdown to the land transfer.

The timing angered critics, who accused the Trump administration of rushing through the final review to have it in place before the Biden administration took office.

That was one of the charges leveled by Apache Stronghold, a group that has spent years fighting the mine, in a petition asking Logan for a preliminary injunction to block the mine. Logan disagreed, pointing to the years of hearings and volumes of correspondence from Apache Stronghold over the mine.

Logan also rejected the claim that the land transfer would violate the Religious Freedom Restoration Act, which prohibits the government from placing a “substantial burden” on the free exercise of religion.

“The spiritual importance of Oak Flat to the Western Apaches cannot be overstated and, in many ways, cannot be put into words,” Logan wrote, citing the tearful testimony of witnesses during the preliminary injunction hearing.

The environmental impact statement said the plan for the mine would eventually turn Oak Flat into a two-mile-wide and 1,000-foot-deep crater, leaving the land “all but destroyed to install a large underground mine, and Oak Flat will no longer be accessible as a place of worship,” he wrote.

Apache Stronghold members march in Phoenix at a February rally calling for courts to block plans for a copper mine at Oak Flat in southeast Arizona. (Photo by Alberto Mariani/Cronkite News)

But that is not the substantial burden courts have said is prohibited by the RFRA, he said. In order to meet that burden, Apache Stronghold would have had to show that the government coerced them to act contrary to their religious beliefs or forced them to choose between a government benefit and their faith.

“This sacred place is core to the traditional religious exercise of the Apaches,” Goodrich said in a March 5 news release. “If it is destroyed, there’s nowhere else for them to carry on their sacred traditions.”

That argument was echoed by Circuit Judge Patrick Bumatay, who said the question of whether the project violates Apaches’ religious rights “is not a difficult case.”

“For the Western Apaches, Oak Flat is sacred land – it is a ‘buffer between heaven and Earth’ and the dwelling place of the Creator’s ‘messengers,'” Bumatay wrote. “Oak Flat is the conduit to the transcendent, and as a result, certain religious ceremonies of the Western Apache must take place there.”

The Forest Service declined to comment directly on the court fight, instead referring to its prepared statements on the project. Resolution Copper, noting that it is not a party to this particular case, referred questions to the government.

But Stephanie Barclay, director of the Religious Liberty Initiative at the University of Notre Dame, said the case is “special and necessary for religious freedom laws in the United States to mean something.”

“If religious freedom only means protections for me and not for thee, then it’s really not a real protection.”

“And that is that faith groups aren’t just focused on protections for themselves, but they’re willing to stand up and defend each other,” said Barclay, whose organization also filed a brief at the district court in support of Apache Stronghold.

“We’re trying to support what they’re doing, even just outside of litigation, trying to shine a spotlight on why this issue is important,” Barclay said.

The project is currently on hold, after the Biden administration rescinded the final environmental impact statement on March 1 so it could give it a “thorough review based on significant input from collaborators, partners and the public.”

The government has said that review will take “several months” and the Forest Service has promised to give Apache Stronghold 30 days notice before that second review is published, which would restart the 60-day clock on the land swap.

Because of those delays, the circuit court has said there is no urgency to act on the request for a preliminary injunction – something Bumatay disputed in his 18-page dissent to the ruling by a three-judge panel.

Goodrich said the case will be “moving forward regardless” of what the Forest Service ultimately rules.

Barclay said she was encouraged, but not surprised, that religious groups have rallied to the case.

“If religious freedom only means protections for me and not for thee, then it’s really not a real protection,” she said. “I’m very gratified to see there has been a broader response to speak up in defense of what’s happening to Oak Flat.”