The Arizona Diamondbacks’ inconsistencies begin with the rotation and the man at the top, Madison Bumgarner, who was lured in 2020 with a five-year, $85 million contract. (Photo by John McCoy/Getty Images)

PHOENIX – The 2020 season was a forgettable one for the Arizona Diamondbacks, who finished a shortened, 60-game schedule 10 games below .500 and in the cellar of the National League West.

The calendar has turned to 2021 and Major League Baseball is scheduled to play a full, 162-game season, meaning there is less reason to panic over a slow start.

“Because of the short season, we didn’t have urgency, we had more panic,” shortstop Nick Ahmed said. “That hurt guys more than it helped. (This year), we have urgency, guys are digging in and trying to make the necessary adjustments.”

The 2021 edition of the Diamondbacks are 6-10 and sit in 4th place in the NL West. To this point, they have failed to find consistency in any of the three areas of the game in the first two-plus weeks of the season.

The inconsistencies begin with the D-Backs rotation and the man at the top, Madison Bumgarner.

Before the 2020 season, Bumgarner signed a five-year, $85 million contract to pitch in Arizona and he has far from lived up to the expectations. In 13 starts in Sedona red, Bumgarner has posted a 7.16 ERA in 60.1 innings and given up 2.5 HR/9.

In his last outing against the Nationals, however, Bumgarner appeared to take a step in the right direction. He was far from dominant but managed to pitch five innings and give up only one run.

Before that start in D.C, Bumgarner and pitching coach Matt Herges simplified their approach, putting analytics and pitch design to the side and going back to letting Madison Bumgarner be Madison Bumgarner, the man who carried the San Francisco Giants to a World Series.

“(I’m) helping Madison understand who Madison Bumgarner is and what he’s done,” Herges said. “I’ll make the analogy to Zoolander when Owen Wilson said ‘You’re Derek Zoolander, man.’ That’s basically what I’ve been trying to tell Bum. He literally took an entire city on his shoulders and won a World Series.”

Luke Weaver was acquired with catcher Carson Kelly as part of the Paul Goldschmidt trade. In an injury-shortened 2019 season, Weaver was one of the D-Backs best starters, posting a 2.94 ERA and 69 strikeouts in 12 starts.

“Luke has had a couple really good starts,” Lovullo said. “He was grinding through the year last year. If you go back to ‘19, for a couple months he was probably our best pitcher before he got hurt.”

Weaver followed up that performance with an incredibly underwhelming 2020 season where he posted a 6.58 ERA in 12 starts.

So far in 2021, Weaver has looked more promising than the 2020 version. In three starts, Weaver has a 3.78 ERA and only one walk in 16.2 innings pitched. The only concern with Weaver has been the long ball. Weaver has given up four homers in his three starts but luckily for him, they’ve all been solo shots.

Taylor Widener was one of the D-Backs top pitching prospects after a dominant 2018 season at Double-A Jackson. His next season with the Triple-A Reno Aces left plenty to be desired, as he pitched to a 8.10 ERA in 23 starts. In 2020, Widener saw time in the D-Backs bullpen and was an average Major League pitcher, putting up a 4.50 ERA in 20 innings with 12 walks and 22 strikeouts. Widener also gave up 2.3 HR/9.

Out of necessity, Widener has been moved to the starting rotation to start 2021 and has taken advantage of the opportunity. In three starts, Widener has a 1.59 ERA and only given up one home run.

Widener’s strikeout rate has also been down this season, with only 11 punchouts in his 17 innings pitched, but that has been a part of the plan.

“I feel like the less I try to do the better I am,” Widener said. “I used to get myself in trouble by overthrowing and trying to strike everybody out. This year, I feel I’ve taken a step back and I’m trying to get early contact and walk fewer guys. I’m just going to keep building off of that and trying to perform.”

The D-Backs rotation received a huge boost when Zac Gallen returned from a stress fracture in his right forearm. Since he was acquired at the trade deadline in 2019, Gallen has been the D-Backs best starting pitcher, posting a 2.80 ERA in 20 starts as a D-Back entering the 2021 season.

The injury, which he suffered in batting practice during Spring Training, couldn’t have come at a worse time for Gallen and the D-Backs.

“It was tough because I felt good those first few days after the diagnosis,” Gallen said. “The team wanted to hold me back and make sure we were being safe about everything.” 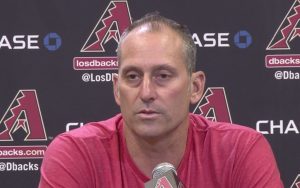 In his first start back from the injury, Gallen dominated the Oakland Athletics for four innings, giving up only one run and striking out eight batters.

Seeing Gallen back out on the mound was a sight for sore D-Backs eyes.

In the bullpen, the D-Backs are missing three key veteran pieces who figured to serve major roles late in games. Tyler Clippard sprained his right shoulder in Spring Training. Joakim Soria strained his left calf in his first appearance in a D-Backs uniform. Chris Devenski was placed on the restricted list for personal reasons before the team’s sixth game of the season.

Those missing pieces have led to a youth movement in the bullpen and, unsurprisingly, some inconsistent performances from that group.

“The bullpen at times has been an area of strength and then other times, they’ve created some difficult situations that we’re not accustomed to,” Lovullo said. “We know it’s early in the season. We know there’s going to be inconsistencies. We’ve had three big role relievers get banged up or they’re missing time for different reasons.”

The D-Backs defense hasn’t done their pitching staff any favors. They have the fourth-worst fielding percentage in the NL (.981) and have committed 11 errors in their first 16 games, the fifth-most in the NL.

Unlike last season, the D-Backs have been able to score runs. Through 16 games, they have scored 73, the fifth-most in the National League and an average of 4.6 runs/game. The 2020 team was ninth in runs scored in the NL.

However, the tendency for this team has been to score those runs in bunches. In seven of their 16 games, the D-Backs have scored three or fewer runs, including being shutout three times. In five of their 16 games, the D-Backs have scored seven or more runs, the most notable being an 11-6 victory over the Washington Nationals where the offense scored 10 runs in the first two innings.

The long ball has carried the D-Backs offense through the first two-plus weeks of this season. The D-Backs have hit 22 home runs this season, putting them in the top-third of the NL, and have scored just over half of their 73 runs via home runs.

Outside of the home run, the D-Backs offense has struggled to manufacture offense. The D-Backs sit in the bottom-third of the NL in team batting average at .223. With runners in scoring position, the bats have been nowhere to be found, posting a meager .178 batting average, and leaving an average of eight men on base per game.

One area of consistency, however, for the D-Backs offense has been its ability to stay disciplined. Through 16 games, the D-Backs have drawn 67 bases on balls, the third-highest total in the NL, and have seen a slightly above league average 3.98 pitches/plate appearance.

“These guys are patient,” manager Torey Lovullo said. “We’re seeing pitches … it just comes down to attacking the pitch you’re looking for and doing some damage on it and we’re going to get there.”

The D-Backs’ best healthy hitter so far this season has been Carson Kelly. Kelly burst onto the scene in Arizona in 2019, hitting 18 home runs and posting an OPS+ of 111 in his first season in Sedona red. Kelly’s 2020 season was underwhelming as he posted a sub-.650 OPS in 39 games.

Kelly credits his approach and ability to put together quality at-bats with his stellar start to 2021.

“I feel like I’ve got a good approach and can take that from the two-hole or eight-hole or wherever I’m at (in the lineup),” Kelly said. “(I’ve got to) continue to put good at-bats together and put my team in the best position and continue to do well.”

Another D-Back looking to return to 2019 form is third baseman Eduardo Escobar. That season, Escobar had a career year, hitting a career-high 35 homers and putting up an OPS+ of 110. Escobar’s 2020 season was nothing to be proud of and his start to the 2021 season looked just the same, with only one hit in his first 22 at-bats.

A minor adjustment before a game in Colorado appears to have unlocked 2019 Escobar. He hit a two-run home run in that game, the first of a streak of four home runs in four consecutive days. Since that game in Colorado, Escobar has been unstoppable, hitting .361/.415/.917 (1.331 OPS) with 6 home runs.

“I’ve been working with (hitting coach Darnell Coles) and (assistant hitting coach Eric Hinske),” Escobar said. “They showed the video of me hitting from 2019. My body position was low and that’s why my swing was slow. Now, I’m standing taller in the batter’s box and I see the pitcher better.”

Kelly and Escobar’s performance’s have carried an offense that’s been depleted mightily in the first two weeks of the season.

In the sixth game of the season, the D-Backs best hitter in center fielder Ketel Marte strained his hamstring running to first base. At that point, Marte had been one of the hottest hitters in the league, slashing an absurd .462/.500/.846 (1.346 OPS) with two homers in his first 26 at-bats before the injury.

Tim Locastro took over for Marte in center field and performed admirably, posting a .345 on-base percentage in his first 58 PA’s of the season. Locastro set a major league record for consecutive stolen bases without being caught to start a career at 29. Unfortunately, Locastro was caught going for 30 and dislocated his pinky in the process, requiring four stitches, and landing him on the injured list.

In Locastro’s place stepped Nick Heath, the newly acquired center fielder by trade from the Kansas City Royals. In his first game as a D-Back, Heath hit three singles against the Nationals.

“I was just able to be myself and know that these guys are pulling for me even though I’m the new kid on the block,” Heath said after his D-Backs debut. “That was pretty awesome. Today was a pretty easy transition and it was really fun.”

Also landing on the injured list was D-Backs first baseman Christian Walker with an oblique injury. Walker had yet to get his bat going in the 2021 season, but he entered the season with 36 homers and a 110 OPS+ in two seasons as the D-Backs starting first baseman.

Walker feels confident that he will put the slow start and the injury behind him and return to form.

“Regardless of the numbers at the moment, I feel great,” Walker said. “I feel competitive. It’s a long season and I’m not looking too far ahead. I understand what I’m up against with an oblique but at the same time, I feel fortunate that it’s a pretty mild situation and I can do something about this.”

6-10 isn’t the start anyone in Arizona wanted to see. However, unlike last season, the D-Backs still have time to get themselves healthy and have plenty more games, 146 more of them, to find consistency.

Lovullo believes his team has the ability to do just that and fight their way through these tough times.

“This team is very resilient,” Lovullo said. “They can remain focused. They always give a great effort. They make adjustments. They’re adaptable.”