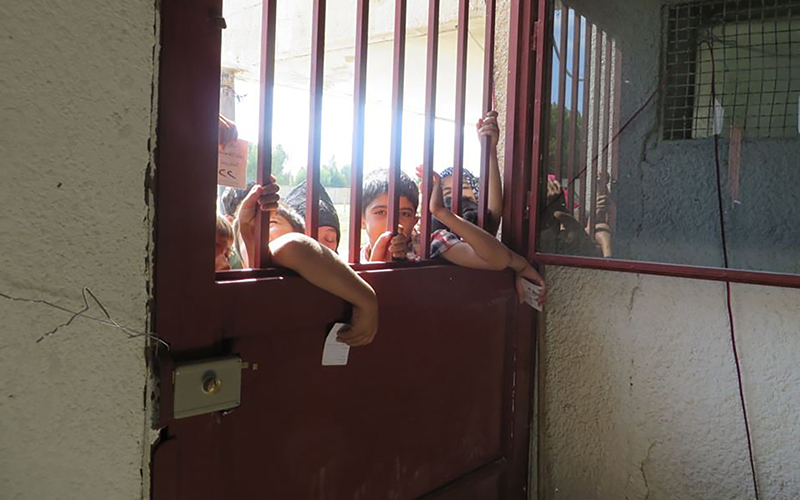 Children with papers to get bread for their families at a Syrian refugee camp in Lebanon in this 2013 photo. Refugee resettlements in the U.S. are at an all-time low, and President Joe Biden balked Friday at raising the cap, though he vowed to do so later. (Photo by H. Murdock, VOA/Creative Commons)

WASHINGTON — Refugee advocates were “deeply disappointed and frustrated” by the Biden administration’s failure Friday to reverse historically low Trump-era refugee limits this year, something then-candidate Joe Biden had promised to do.

The White House said Biden remains committed to raising the cap to 62,500, the number outlined in the administration’s budget request last week, but decided that goal is unrealistic for now, given the “decimated refugee admissions program we inherited” from the Trump administration.

Instead, Biden left the refugee cap at 15,000 for this fiscal year, but shifted the allocation of admissions among regions to respond to “increasing political violence, repression, atrocities or humanitarian crises” in countries including Myanmar, Syria and the Democratic Republic of Congo, among others.

White House press secretary Jen Psaki said the move will “enable flights from those regions to begin within days” and that the president would set a new cap for this fiscal year by May 15.

In the meantime, just 2,050 refugees were admitted in the first six months of the fiscal year, a fraction of any previous year, and refugee-aid groups are left wondering when the Biden administration will act.

“In the past few weeks, we’ve had 700 flights to the United States which were canceled, including 37 to our offices here in Arizona,” said Stanford Prescott, community engagement coordinator for the International Rescue Committee in Arizona. He said the failure to raise the limit now leaves “tens of thousands of people who are left in limbo.”

Prescott said that as the number of arrivals drops, so too does funding for local refugee aid organizations.

“By lowering the total arrivals that does lower the funding available to pay for those programs” such as housing and employment assistance, he said. “Nationally what we have seen is that over the past few years that has resulted in office closures around the United States.”

The move comes as the Biden administration is grappling with a surge of migrants at the southern border, with almost 600,000 people apprehended in the first half of fiscal 2021. While the refugee cap does not apply to those migrants, an official with the Federation for American Immigration Reform cited the decision to keep the Trump-era refugee cap as proof that Biden’s immigration policy is flawed.

“This is partly due to his complete mismanagement at the border,” said Ira Mehlman, FAIR’s media director. “What we’re seeing at the border is wholesale abuse of our asylum policy.”

Mehlman said he thinks the administration should focus on the asylum process and prioritize asylum seekers in immediate danger rather than admit more refugees into the country.

But Rep. Ruben Gallego, D-Phoenix, said in a tweet Friday that “refugees seeking asylum at the border have nothing to do with our annual refugee admissions.”

“To let it (the border surge) inform the administration’s decisions only feeds into a negative narrative about refugees,” Gallego tweeted, calling on Biden to reverse the decision and raise the refugee cap to the amount he had promised earlier.

During the campaign, Biden had said he would raise the refugee cap to 125,000, a sharp departure from former President Donald Trump, who reduced the refugee cap every year he was in office. The cap dropped steadily from 85,000 when President Barack Obama left office to 15,000 when Trump left.

Biden walked back those expectations with the release last week of his budget, which called for admission of as many as 62,500 refugees this fiscal year.

Arizona has long been one of the top states for refugee resettlement, accepting nearly 83,000 people since 1981, with a high of 5,115 refugees in fiscal 2016, according to data from the Arizona Department of Economic Security.

But DES said the state had resettled just 137 refugees as of Friday. The State Department, whose data only ran through March 31, put the number for Arizona even lower, at just 51 refugees.

The State Department said Arizona and Georgia tied for the 13-highest number of refugees admitted so far this year. California had admitted the most refugees, with 275 by March 31.

In recent years, the largest group of refugees resettled in Arizona have come from Congo. Of the 51 refugees the State Department said settled in Arizona, 32 had fled the Congo; DES said Congolese accounted for 50 of the 137 refugees it has recorded so far in fiscal 2021.

Prescott said the cap affects more than refugees still overseas. He said his organization has been working with an elderly grandmother from Congo who has been waiting to reunite with her adult children.

“However, due to this lower arrivals number, they may not have the opportunity to go through the process and be reunified,” Prescott said.