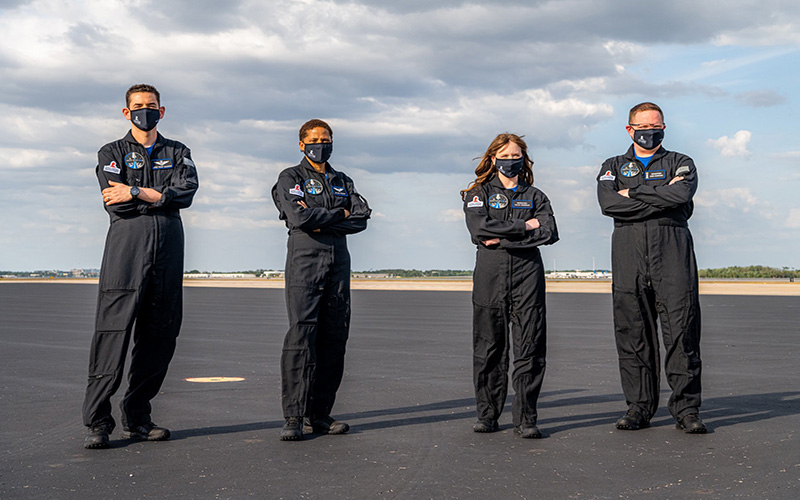 Sian Proctor of Phoenix, second from the left, is a professor of geology, sustainability and planetary science who will pilot this fall’s SpaceX mission. She joins Jared Isaacman, left, Hayley Arceneaux and Christopher Sembroski. (Photo courtesy of Inspiration4/John Kraus)

PHOENIX – A Phoenix educator, entrepreneur, adventurer and science communicator has been selected for the crew of Inspiration4, SpaceX’s first all-civilian mission to space.

Sian Proctor, who’s a geology, sustainability and planetary science professor at South Mountain Community College, was one of the two final crew members SpaceX announced Tuesday at Kennedy Space Center in Florida, where SpaceX Dragon will launch in the fall.

Proctor, who will pilot the craft, was selected from thousands of applicants for a seat on the mission. She joins Chris Sembroski, a former space camp counselor and military veteran, along with two other crew members for the Inspiration4 flight, which will help raise funds for St. Jude’s Children Research Hospital.

“It is such an honor to be a part of the Inspiration4 crew and to go on this journey. I like to think that space has been in my DNA,” Proctor said during Tuesday’s announcement. “As I go on this journey, I just am so thankful and appreciative to be able to share my inspiration and my goal of prosperity through creativity with all of you.”

Sembroski and Proctor will join mission benefactor and commander Jared Isaacman and physician assistant Hayley Arceneaux, who is a bone cancer survivor.

“Dr. Proctor grew up with a front row seat to space as her father worked as a NASA contractor,” Isaacman said Tuesday. “She is here because her passion for space exploration shaped her career.”

Hello everyone, thank you for supporting my #SpaceArt & #Poetry journey. I hope you’ll check out my @Shift4Shop: https://t.co/pUOcwAwmE1 & help share my #inspiration4contest message & #poem. Let’s unleash our #Space2inspire & create a J.E.D.I. future for all of humanity. ❤️🌍👩🏾‍🚀🚀 pic.twitter.com/JzRf6ayGcL

Proctor was born in Guam, where her father was a computer engineering technician at NASA’s tracking station for the Apollo moonshots in the late 1960s.

In February, Isaacman and St. Jude’s Children’s Research Hospital chose Arceneaux as the flight’s first crew member. She will serve as the medical officer for the Inspiration4 mission.

“Since I joined the crew about a month ago,” Arceneaux said, “I’ve had so many opportunities to share my story and to inspire people in ways I never imagined possible. While we have a really fun adventure ahead of us, I know that we’re going to do some incredible work back here on Earth.”

Earlier this year, Proctor became one of the Explorer’s Club 50: Fifty People Changing the World, according to her website. She combines art with poetry through her business Space2inspire, which was part of her submission for a seat on the historic mission.

Isaacman said the work “blew us away, and I know she blew away all of the judges that were on the independent panel with her submission.”

Proctor, who was a finalist for the 2009 NASA astronaut program, also is focused on J.E.D.I. space, which stands for “ a just, equitable, diverse, and inclusive space as we advance human spaceflight,” according to her website. 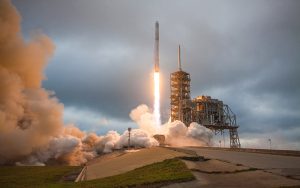 This fall, SpaceX will launch the Dragon spacecraft with the first all-civilian crew on board. Sian Proctor, a science communicator from Phoenix, will pilot the multiday mission, which will orbit Earth every 90 minutes. (Photo courtesy of SpaceX)

Proctor is a NASA Solar System Ambassador and serves on the National Science Teaching Association’s Aerospace Advisory Board, the JustSpace Alliance board, and the SEDS USA advisory board. She’s also an explorer.

“In 2019, I was the science communication outreach officer on the JOIDES Resolution expedition 383 and spent 2-months at sea investigating the dynamics of the Antarctic Circumpolar Current,” she wrote on her website.

Inspiration4 is the first all-civilian mission to outer space. The crew will be aboard SpaceX’s Dragon spacecraft, and the mission will be a multiday journey that begins from the Kennedy Space Center this fall. The private spacecraft is the only one currently flying that can return significant amounts of cargo back to Earth.

Dragon will travel at more than 17,000 mph and 335 miles above the Earth, orbiting every 90 minutes. Crewmembers will conduct experiments that SpaceX designed to expand human knowledge of the universe.

“Inspiration4 is committed to assigning the maximum possible mass towards this valuable research, providing access to space for inspiring projects that are otherwise unable to overcome the high barriers of traditional space-based research,” according to the Inspiration4 mission page.

As the team awaits the launch of Inspiration4, SpaceX will provide commercial astronaut training aboard the Dragon spacecraft and the Falcon 9 launch vehicle. Crewmembers will undergo simulated operations in zero gravity, microgravity, emergency preparedness training, and spacesuit and spacecraft exercises.