To contend with the recruiting process during the pandemic, Lauren Sayre spent a lot of time preparing a highlight reel and talking to coaches on the phone instead of by email. (Photo by Alina Nelson/Cronkite News) 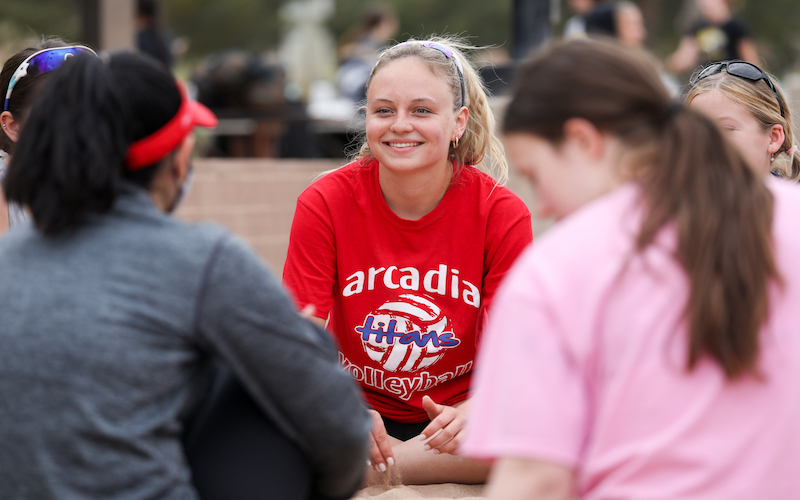 Like many high school student athletes applying to colleges, Arcadia High School senior and sand volleyball player Lauren Sayre had to adjust to college coaches only seeing her play on video, not in person. (Photo by Alina Nelson/Cronkite News)

PHOENIX – The college experience is often defined as the best four years of a person’s life.

Deciding where those four years will be spent can be challenging enough. For high school athletes hoping to play their sport at the next level, the decision can be even more difficult.

Limited campus tours because of health and safety protocols, and the inability for coaches to evaluate players in person were just some of the obstacles that Sayre encountered while deciding where she would play sand volleyball in college. Add to the mix a lack of roster spots due to funding and an NCAA decision to allow senior athletes to return for another season because of COVID-19’s impact.

The pandemic was a challenge for college coaches, too, who did much of their recruiting virtually. According to a survey by Next College Student Athlete, a company that helps the recruiting process, a 26% increase was seen in email opens sent from recruits to college coaches during the pandemic, comparing March through July in 2020 to the same time frame in 2019.

For Sayre, choosing a school was a decision she did not take lightly.

Beginning her search during her junior year, Sayre looked at schools in South Carolina, New Orleans and Atlanta. She considered Utah and schools in various parts of California.

Sayre wanted to play at a big school, preferably in a Division I program. And she hoped to find a coach who she believed could help her grow as an athlete.

There also was the matter of convincing somebody that she can compete at that level.

“Initially, I spent a lot of time piecing together clips from games to create a highlight reel to send to schools,” Sayre said. “I just sent my video to as many schools as I could, even if I knew (the schools) were a reach.”

“I encouraged (Lauren) to set up calls with coaches, prepare and have mature conversations,” said her father, Tim Sayre. “She had to step way out of her comfort zone by not relying on emails to communicate with coaches.”

For athletes like Sayre, the recruiting process during the pandemic was dramatically different. In a normal year, athletes are allowed to make campus visits, meet potential teammates and coaches, tour facilities and meet with academic advisors.

Coaches also can scout games and see players in live action, visit them in their homes and make their sales pitch.

Most of that changed over the last year.

“Before COVID, Lauren was playing in as many tournaments in Arizona and California as she could,” Steve said. “But when COVID hit, there were no tournaments or practices. Everything stopped.”

Sayre had to practice and train alone. She couldn’t talk to any coaches in person or tour any schools. And college seniors who would have normally graduated the previous year were allowed to return for an additional year of college athletics, leaving roster spots even more scarce.

Sayre was able to tour the University of South Carolina before COVID hit, but after that everything moved to a virtual platform.

Sayre’s father helped her pair down the overwhelming amount of information she received.

“I ended up writing a pros-and-cons list for every school I was considering,” Sayre said. “That was the best way for me to organize my thoughts.”

She finally settled on the University of Utah

“I was drawn to Utah because of the competitive (Pac-12) Conference,” Sayre said. She also liked the big-school atmosphere and the strong presence athletics have on the school’s Salt Lake City campus.

And Utah is one of around 50 schools with a Division I sand volleyball program.

“I had never seen Lauren play in person, only on video,” Whicker said. “I haven’t seen a lot of sand videos. I probably have seen more indoor videos of her.”

Sayre said she was initially pursuing a scholarship to play indoor volleyball, so it was no surprise that most of her video was of the indoor game.

She started playing volleyball in eighth grade after almost a decade spent on the soccer pitch.

“In soccer, if you make one mistake it results in a goal, as opposed to the fast paced nature of volleyball,” Sayre said.

But she didn’t try sand volleyball until her sophomore year at Arcadia.

“At first I was frustrated with how hard it was to get into a rhythm and even just move in the sand.” Sayre said.

While she continued to develop her skills in the indoor game, she played in sand every chance that she could.

By her junior year, Sayre decided she was ready to make the switch.

“I ended up playing full-time sand (junior) year,” Sayre said. “In sand volleyball, as opposed to indoor, I have the ability to play every aspect of the game, which I like.”

Switching her focus from indoor to sand, Sayre quickly discovered that there were fewer options at the next level. However, the Utah campus was one of the places she was able to visit, and it was a fit.

“I was able to walk around the campus during a COVID-friendly visit, and I felt like Utah was going to be my new home.” Sayre said. “I also liked the strong love for the outdoors present at Utah, with everything from hiking to skiing.”

While her natural athleticism made the transition from indoor to sand volleyball easy, the big thing that makes Sayre stand out against others is her leadership, according to Whicker.

“In the video I saw, Lauren really just stood out on her team,” Whicker said. “She was a leader on her team. She toughed it up when the game was on the line, and it was really cool to be able to see that.”