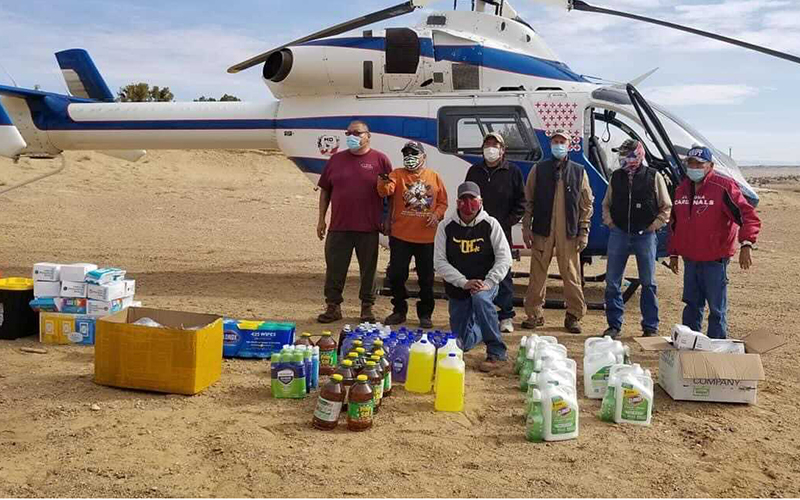 PHOENIX – It started with chain saws and a will to serve.

When COVID-19 first struck the United States, the Navajo Nation was hit hard. Within months, infection rates across the reservation were the highest in the country, and death rates skyrocketed.

Among those affected: about 5,000 United States veterans who live on the reservation, which covers parts of Arizona, New Mexico and Utah.

Last March, when Tom Eisiminger and Bob Dalpe heard of the struggles facing Navajo veterans amid the pandemic, they felt it was their duty to help. Only later would their effort come to have an official name: Native American Sustainability for Veterans and Those in Uniform.

Eisiminger, of Mesa, was in the Army for 26 years, while Dalpe, of Chandler, served in the Air Force for 14 years. Both are members of the Veterans Medical Leadership Council, a Mesa organization that connects veterans to medical and mental health resources.

“We are veterans,” Eisiminger said. “We hear that other veterans are in trouble, we roll up our sleeves and we get to work.”

After enlisting the help of friends and connecting with Hope MacDonald LoneTree, a former member of the Navajo Nation Council and daughter of former tribal Chairman Peter MacDonald, who’s one of the last living Navajo code talkers, they formulated a plan.

MacDonald LoneTree joined with Army vet Pete Tsinnijinnie, the commander of his local veterans organization in Chinle, to provide guidance on how others could most help. 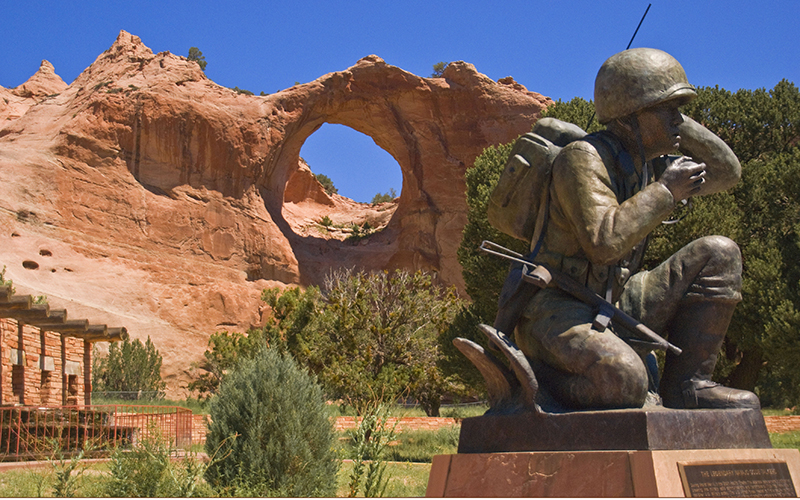 A monument in the Navajo Nation capital of Window Rock honors Navajo code talkers, who used their native language to transmit secret Allied communications during World War II. Today, about 5,000 veterans live on the Navajo reservation. (Photo by Ron Cogswell/Flickr)

“I called Pete and asked, ‘What is it that you need up there?’ and he told me ‘Chain saws,’” Eisiminger said. “It absolutely floored me.”

Why chain saws? Thousands of homes on the Navajo reservation have no electricity or running water. In an interview, Tsinnijinnie explained that veterans live in a large portion of these off-the-grid homes, and they desperately needed a way to keep warm as winter approached.

“We were beginning to run out of firewood and fuel,” Tsinnijinnie said. “Rather than trying to fight that problem, we decided to go ahead and see if we could start harvesting and hauling the wood ourselves. Unfortunately, most of our veterans were not equipped for this, having only axes.”

Eisiminger and Dalpe got to work. Between their social circles, the two raised $8,000 to purchase chain saws, 5-gallon gas cans, fuel cards, goggles and gloves.

The next step was delivering it all. After reaching out to the National Guard with little luck, Eisiminger contacted MD Helicopters in Mesa, which employs several veterans. The company flew the supplies up to the reservation, and tribal leaders helped get them directly to veterans.

With money to spare from the first round of collections, Eisiminger and Dalpe reconnected with MacDonald Lonetree and Tsinnijinnie to see what else was needed. The answer: personal protective equipment, and so the two enlisted the help of local distilleries to provide nearly 1,000 gallons of hand sanitizer.

“The pandemic hit Navajo Nation very hard, and even though we had some good measures in place, like public health orders and sheltering in place, it was nothing that we have ever experienced,” said MacDonald LoneTree, who now lives in Washington, D.C. “It was a whirlwind because Navajos are very much a social community. Not only do we get out and visit one other, but we have traditional ceremonies and we have extended families that are very close.”

Despite the help they were able to provide, it was clear to Eisiminger and Dalpe that their work was far from over. Soon, more good Samaritans stepped up to help.

A Phoenix trucking company volunteered to deliver goods to the reservation, including 300-gallon water tanks to help those without access to running water.

“In some cases, there were families that had enough water to go a day, and then they would have to make an hour trip to the well to fill their canisters back up and go back home and repeat that cycle every day,” Eisiminger said.

Tsinnijinnie helped get the tanks to the right people, providing a water source that could last a week instead of a day or less.

“It was a blessing,” he said. “We were able to have the veterans use them and supply themselves with water – fresh, potable water. And that is what we have been doing since.”

The Native American Sustainability for Veterans and Those in Uniform officially formed last month, and plans to continue its work beyond the pandemic. One future initiative focuses on helping community members and veterans with diabetes, a condition that plagues the Nation. Federal research shows about half of Navajo adults have Type 2 diabetes or prediabetes. 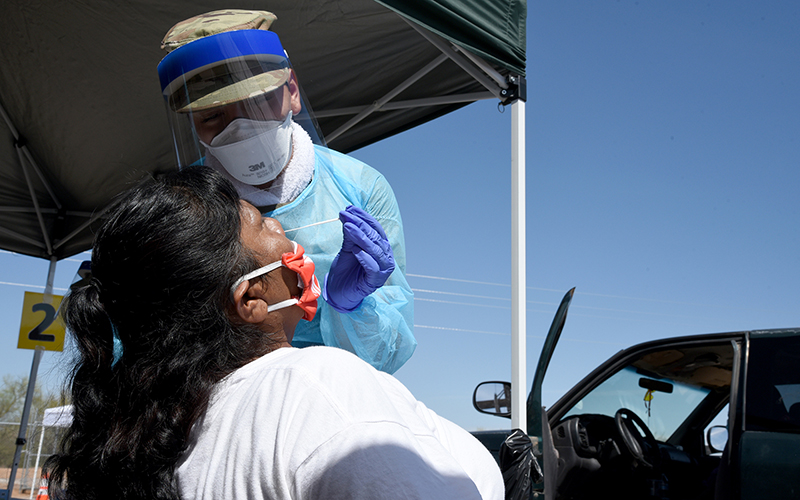 Eisiminger said his organization is in the process of securing some small refrigerators, which would be powered by solar panels, to place near the homes of veterans who are insulin dependent to help store the medication.

MacDonald Lonetree said the organization’s efforts have raised the spirits of veterans and the community at large, providing comfort and comradery through a dark time.

“The Navajo Nation is dealing with a mental health crisis, so when you have people who have the compassion and energy and resources to come help in any way that they can, it really provides a sense of hope to our people,” MacDonald LoneTree said, noting that some vets on the reservation have found a sense of purpose through helping.

“Veterans helping veterans has really had an impact on the people on the ground,” she said. “To know that they can themselves go out and help others that are next door or down the road has had a very positive impact.”

Claire Spinner expects to graduate in May 2021 with a bachelor’s degree in journalism and a focus in music. Spinner, who writes for the Entertainer! in Phoenix, is working for Cronkite News this spring.