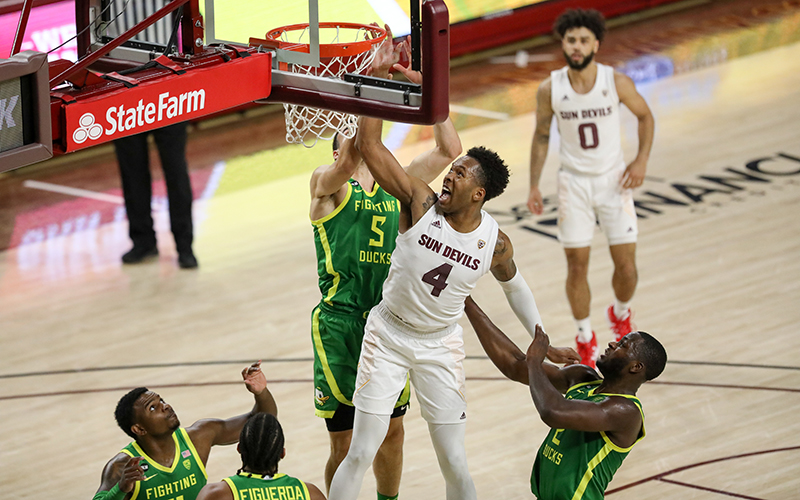 Kimani Lawrence has been a difference maker for the Arizona State men’s basketball team in its final seven games, averaging 14.3 points and 8.4 rebounds. (Photo by Alina Nelson/Cronkite News)

TEMPE – As Arizona State prepared to take on the Washington Huskies, the command from coach Bobby Hurley to Kimani Lawrence was simple: “Hey, I need 20 rebounds from you tonight.”

Whether serious or farcical, the message was received by the senior forward, who delivered two nights later by posting 21 points and a career-high 20 rebounds in an 80-72 win over those same Huskies. Lawrence became the first Sun Devil to score 20 points and collect 20 rebounds in a game since Mike Batiste put up 36 points and 20 rebounds against Wagner in November 1997.

Lawrence and ASU will have to recreate that magic when the men’s Pac-12 tournament begins Wednesday in Las Vegas. The Sun Devils, seeded No. 8, take on ninth-seeded Washington State at 2 p.m.

Lawrence’s performance against the Huskies on Feb. 25 highlighted an impressive turnaround that has turned him into one of the Sun Devils’ top contributors. In ASU’s final seven games of the regular season, Lawrence averaged 14.3 points and 8.4 rebounds per game. In back-to-back games against the Huskies, Lawrence collected his first two career double-doubles and put up a career-high 22 points.

After that late February game, Lawrence mentioned former teammate Zylan Cheatham, who had two 20-rebound games of his own as a Sun Devil.

“I got to witness (Cheatham) get 20 rebounds,” Lawrence said. “I’m glad that, as a senior leader, I can bring that same impact and have that same type of presence and show the young guys how to play the right way and how to play hard.”

Lawrence has worked with Hurley and his staff all season to make subtle adjustments to his shot. Over the past six games, Lawrence has reaped the benefits.

“Kimani tweaked his shot,” Hurley said. “I think it was frustrating him greatly at points during the year when he wasn’t having the success he was hoping for. He’s made subtle changes that have enabled him to shoot the ball with a little more confidence. It’s opened the door for him to be the all-around player we know he is.”

Minor adjustments combined with support from coaches and teammates have given Lawrence newfound confidence that has translated into his performance on the court.

“I have confidence in my teammates, who have been doing a good job helping me, and my coaches,” Lawrence said. “We have a good support system and we all support each other. You’re surrounded by guys who truly believe in you.”

Lawrence’s attention to detail and understanding of his role on the team have made an impression on his coach.
“He’s done a lot of the little things well,” Hurley said. “He’s been a glue guy for us. He understands what we’re trying to do on defense. He understands the playbook. He moves without the ball very well and will go to the glass. He does a lot of things that are very unselfish that are important to winning basketball games.”

Lawrence couldn’t have picked a better time to evolve into one of ASU’s top performers. Injuries and COVID protocols have left the Sun Devils shorthanded for most of their games, especially in the frontcourt. Marcus Bagley was out over a month due to an ankle injury before returning against Colorado. Chris Osten also had an ankle issue and was not playing at 100% for a stretch of games in February. Jalen Graham had to miss a game with a non-COVID related illness. Walk-on John Olmsted had to play meaningful minutes.

With little depth in the frontcourt, the emphasis was placed on Lawrence to step up and he more than exceeded expectations.

“I’ve made it a point to get rebounds because we’re missing some guys that usually help us contribute,” Lawrence said. “The coaches keep telling me that’s what’s going to keep me on the court. I’ve just been aggressive getting those boards and if I keep doing those things, everything else will take care of itself.”

As the Pac-12 tournament looms, the Sun Devils still believe they can make a run.

“We’re not giving up on our season,” Lawrence said. “I know we’re shorthanded, but there’s still a lot of basketball to be played and there’s still a chance for us to play in the postseason. That’s the goal.”