Rep. Deb Haaland, D-N.M., in a file photo from 2019, would be first Native American to run a Cabinet-level agency if confirmed by the Senate. But senators from coal and oil states challenged her position on fossil fuels during the first day of her confirmation hearing. (Photo by AFGE/Creative Commons)

WASHINGTON – Republican senators tried to pin down Rep. Deb Haaland at a hearing Tuesday on her nomination to be the next Interior secretary, pushing her on fossil fuels and the job losses they said would come from President Joe Biden’s proposed energy policies.

But Democrats at the Senate Energy and Natural Resources Committee hearing focused mostly on the historic nature of Haaland’s nomination – if approved, she would become the first Native American to head a Cabinet agency.

“I note, as several have already noted, how historic and important it is that you will be the first Native American woman – and woman – poised to serve as secretary of the Interior,” said Sen. Mazie Hirono, D-Hawaii.

For her part, Haaland – a New Mexico Democrat and enrolled member of the Laguna Pueblo – mostly avoided specifics during the hearing, saying she would support the Biden agenda as secretary but would also listen to senators’ concerns while bringing the perspective of an Indigenous woman to the job.

“If confirmed, I will listen to all of the people represented by members of this Committee and this Congress,” Haaland said in her opening statement, after noting she met with Sen. Joe Manchin, D-W.Va., where he shared “the issues and needs of the people he represents.”

But Republicans repeatedly pressed Haaland on statements she made while in the House, including her opposition to fracking and the Dakota Access pipeline, her support for the Green New Deal and the potential loss of mining and drilling jobs under Biden’s agenda.

“You said you would, ‘Work your heart out for everyone, including fossil fuel workers,'” said Sen. John Barrasso, R-Wyo. “My question for you is, why not just let these workers keep their jobs?”

But Haaland, in response to a question from Sen. Bernie Sanders, I-Vt., reiterated her support for clean energy, and said that would not necessarily mean a loss of jobs.

“I believe there are millions of jobs in a clean energy future for Americans, and if I’m confirmed, I would be honored to help the president move those forward,” she said.

Haaland often deflected questions, saying she did not have all the information she needed to answer but pledging to work with lawmakers – and deferring to the administration, as when she was asked about the pipeline project Biden halted early in his administration.

“I know that the Keystone Pipeline has been a passionate issue on both sides,” Haaland said. “With respect to President Biden’s decision, it’s his decision as president.”

Sen. Steve Daines, R-Mont., was typical of the opponents when he expressed “concerns about proceeding with this nomination.”

“The track record and the ideology in the past I think will perpetuate divisiveness and will certainly harm Montana’s economy,” Daines said.

But Republican concerns with Haaland were partly blunted by Rep. Don Young, R-Alaska, who testified on her behalf and urged the senators to confirm her. He said Biden has the right to assemble his own team, but also praised Haaland’s ability to work across the aisle, something he said they have been able to do in the House even though they often disagree.

“Her job here is to understand the big picture, it’s no longer a little cartoon,” Young said of her current job as one of 435 House members. “This is the big picture, and she’ll have to have the responsibility to do the job I know she can do.” 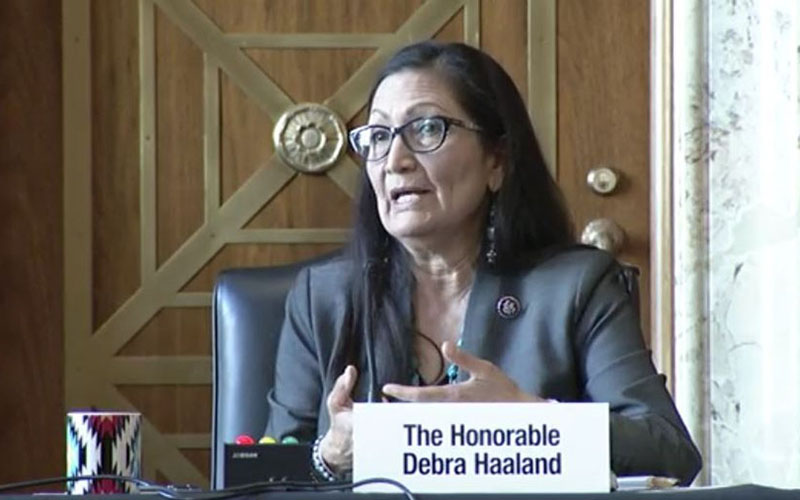 Rep. Deb Haaland, D-N.M., has a strong environmental record in the House, but pledged to senators that she would listen to their concerns as Interior secretary and work with them. (Photo courtesy Senate Energy and Natural Resources Committee)

Democrats turned the questioning to Haaland’s stands on Native American issues, on parks and open spaces funding and on conservation jobs.

Sanders asked if Haaland would try to keep the transfer of land for a massive copper mine from going through at Oak Flat, an area in southeastern Arizona sacred to some Apache. Haaland said the U.S. Forest Service should handle the issue, since it is within their domain, but that she will “ensure that tribal voices are heard.”

“I believe that it is in the purview of the forest service,” Haaland said. “However, if I have an opportunity, I would look forward to being briefed on it … to making sure that the voices of the tribal nations are heard with that issue.”

“My friend and colleague Deb Haaland is a fighter for justice, an advocate for Native communities, and a protector of our environment and public lands,” Grijalva wrote. “She is an excellent choice for Interior secretary, and the kind of leader we need in this moment.”

The hearing adjourned after more than two hours, and is scheduled to resume Wednesday morning. No vote has been scheduled on the nomination.

Haaland said she hopes her nomination can serve as an inspiration.

“It’s not about me,” Haaland said. “Rather, I hope this nomination would be an inspiration for Americans moving forward together as one nation in creating opportunities for all of us.”