State of tribal nations ‘strong’ despite crises, but feds need to help

WASHINGTON – The state of Indian nations is strong, but the federal government still needs to “come to terms with the right of tribal Nations to chart their own course and their rightful place,” a tribal leader said Monday.

National Congress of American Indians President Fawn Sharp, in a wide-ranging State of Indian Nations address, also pointed to long-running problems of disrespect for tribal sovereignty and of missing and murdered Indigenous women, as well as new challenges posed by the COVID-19 pandemic.

The federal response to the pandemic on tribal lands illustrates the problem, said Sharp, who criticized what she called the bungled coordination of state and Indian health departments, saying tribes need a “single federal office and point of contact” for vaccine help.

She said COVID-19 has hit Indigenous communities particularly hard, and the federal government “simply must do better. The lives of our people and the future of nations are at stake.”

“Tribal nations should also be able to obtain covid-19 vaccine supply from both the Indian Health Service and the states, not one or the other,” Sharp said.

In the congressional response, Sen. Lisa Murkowski, R-Alaska, acknowledged the challenges faced by Native Americans but also pointed to recent successes, including passage of Savanna’s Act and the Not Invisible Act. Those laws aim to strengthen the federal response to violence against Native Americans, particularly Indigenous women.

“Unfortunately, too many missing or murdered indigenous women have never received justice or resolution,” Murkowski said. “I agree with what tribal leaders have said that the MMIW crisis spans multiple policy domains, jurisdictions and regions. And so, the response must be multi-pronged.”

Sharp did acknowledge hopeful signs in the early days of the Biden administration. Those have included a presidential memo directing federal agencies to increase consultation with tribes and the nomination of Rep. Deb Haaland, D-N.M., to be the next secretary of Interior.

Sharp hailed Biden’s “historic nomination of Congresswoman Deb Haaland as the first Native person to lead the Department of Interior, which more profoundly impacts the daily lives of Native people than any other federal agency.”

Haaland, an enrolled member of the Pueblo of Laguna and a “35th-generation New Mexican,” according to Sharp, has a “centuries-old connection to and reverence for” the land that would serve her well as secretary, Sharp said. The Senate Energy and Natural Resources Committee is scheduled to hold a confirmation hearing for Haaland Tuesday.

Sharp also welcomed Biden’s decision to rejoin the Paris Climate Accords, after the “past four years (when) the United States has been derelict in its own duty to act” on climate change, and his decision to reverse the Trump administration’s OK of the Dakota Access Pipeline through tribal lands. 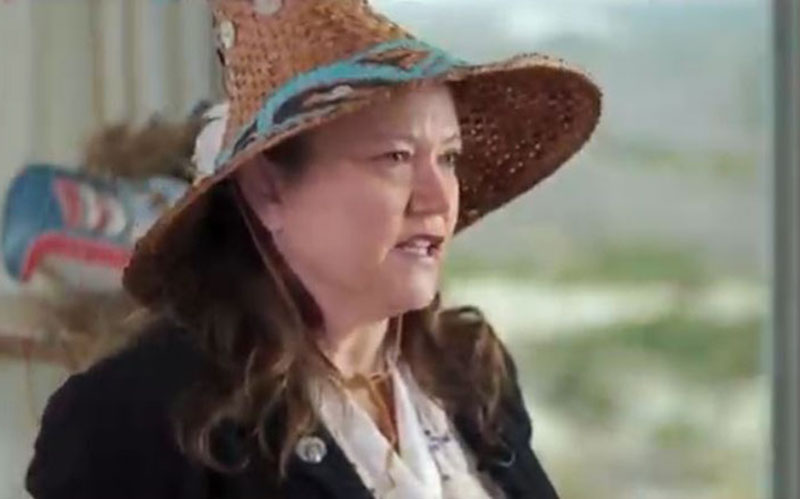 NCAI President Fawn Sharp said Native nations “demand and deserve … the right as sovereign nations to say yes or no” to projects like the proposed Oak Flat mine in southeast Arizona. (Photo courtesy National Congress of American Indians)

But tribal governments “demand and deserve” to be treated like sovereign nations when the federal government is weighing projects that affect tribal communities, Sharp said, specifically citing the proposed copper mine at Oak Flat in southeastern Arizona.

“We demand and deserve a standard in which we come together as equal governmental partners working hand-in-hand to develop the laws and policies that advance the federal government’s trust and treaty obligations, or otherwise impact tribal nations and our citizens,” Sharp said.

“We have the right as Sovereign Nations to say yes or no and that right must be respected,” she added.

While Biden had ordered increased consultation with tribal governments, Sharp said that’s just a first step. The order must be “real, permanent teeth” by giving tribes the power to consent to construction and other activities being done on Native lands, she said.

“If the United States is truly committed to embracing our shared future with courage, it must formally acknowledge and reckon with the wrenching pain its failures continue to cause our tribal Nations and communities,” Sharp said.