Apache Stronghold activists marched in Phoenix last week in oppositino to the Resolution Copper mine at Oak Flat, before holding a vigil ahead of a U.S. District Court hearing on their case. The judge in that case rejected their request for a preliminary injunction Friday. (File photo by Alberto Mariani/Cronkite News)

WASHINGTON – A federal judge Friday refused to order a halt to the proposed Resolution Copper Mine on Oak Flat, land that opponents say is sacred to the Apache people and will be destroyed by the mine.

U.S. District Judge Steven Logan rejected a request by the group Apache Stronghold for a preliminary injunction against the mine, saying the group did not have standing to challenge the project. Further, Logan wrote, the group had not shown it had “a likelihood of success on, or serious questions going to, the merits of its claims.”

Those included claims, in sometimes tearful testimony last week, that the project violated an 1852 treaty with the Apache, that it would violate their First Amendment rights to worship and that the government violated their due process rights by rushing approval.

Calls seeking comment from the group and its attorneys were not immediately returned Friday. But in a statement posted to its website Thursday, Apache Stronghold advocates said the mine would destroy Oak Flat, leaving behind a “crater of rubble more than 1,000 feet deep and almost two miles across.”

The group’s leader, Wendsler Nosie Sr., said in the statement that “Oak Flat or Chi’chil Bildagoteel cannot be replaced.”

Nosie and his granddaughter, Naelyn Pike, testified in Logan’s court last week about the significance of Oak Flat, which they said has been used for a coming-of-age ritual known as the sunrise ceremony, as a burial ground and as a place to collect food and herbs, or just gather with family.

Pike testified that if Oak Flat is destroyed, “everything the creator has given to us will be taken away.”

The Oak Flat parcel has been protected since the 1950s as a campground. But it was part of the 2,422 acres in the Tonto National Forest that the federal government agreed to swap with owners of Resolution Copper in exchange for 5,459 acres of land in southeast Arizona from the company.

That swap was finally approved, after years of failure, when then-Sen. John McCain included it as a last-minute amendment to the must-pass Defense Department budget in December 2014.

That started years of studies and planning on the project that ended in January when the U.S. Forest Service approved the final environmental impact statement, which clears the way for the land swap to take place. The government has said that exchange will not happen before March 11. 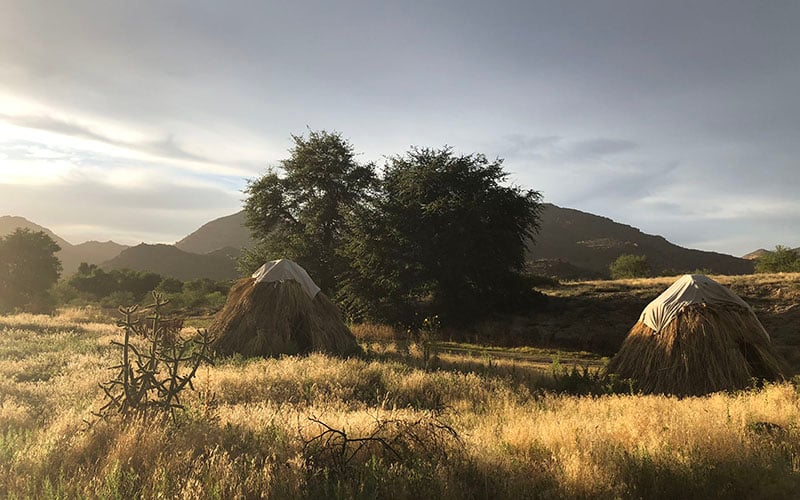 Opponents of the Resolution Copper Mine say it will damage land sacred to the San Carlos Apache, but the federal government has given an OK to the project after years of review. (Photo by Russ McSpadden/courtesy of Center for Biological Diversity)

According to Resolution Copper’s website, the project “has the potential to supply nearly 25% of U.S. copper demand,” would create thousands of jobs and have “an economic value of several billion dollars over the estimated mine life.”

But it would also irrevocably change the face of Oak Flat, ultimately leaving a crater 1,000 feet deep and two miles wide, critics say.

Apache Stronghold filed suit just days before the Forest Service issued its findings, charging that the approval had been rushed through in the waning days of the Trump administration, violating their due process rights to challenge the mine.

Logan rejected that claim, pointing to Nosie’s testimony that he had protested the project for years, including testifying to Congress “many, many times” on the project, and repeatedly filed letters and statements with officials.

Logan also rejected the opponents’ claim that the federal government was infringing on their faith, despite the likely damage to Oak Flat.

“Even where land is physically destroyed, the government action must still fall within … two narrow situations” to be considered a violation of First Amendment rights, Logan said. The government would either have to coerce a group into violating its beliefs or it would have to mount a targeted denial of “rights, benefits and privileges enjoyed by other citizens.”

The ruling did not come as a surprise to Stephanie Barclay, director of the Notre Dame Religious Liberty Initiative, one of several groups that filed a brief this week supporting Apache Stronghold’s case. Their brief said the government has been “desecrating and destroying Native American sacred sites since before the Republic was formed.”

Barclay pointed to the case in which the Forest Service planned to allow logging in the “center of the spiritual world” of the Northern California Yurok, Karok and Talowa tribes. The logging would “seriously impair” the tribes’ worship, she wrote in a Harvard Law Review article, but the Supreme Court upheld the Forest Service, saying the government had a right to do as it pleased with “what is, after all, its land.”

Barclay said her group “continues to support the rights of the Apache, and other Indigenous groups to receive protection under the Religious Freedom Restoration Act.”