A mural on the west side of Phoenix Suns Arena is part of a Black History Matters initiative. (Photo by Marlee Smith/Cronkite News) 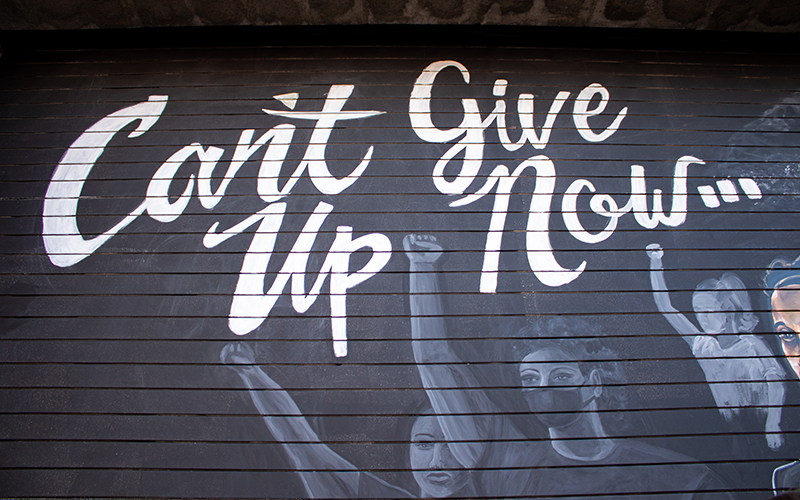 The mural is one of 28 being painted throughout Phoenix in February to honor Black History Month. (Photo by Marlee Smith/Cronkite News) 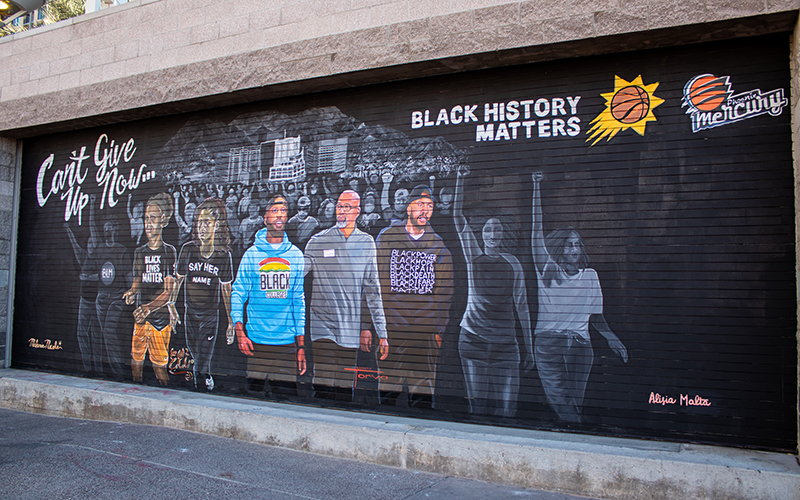 PHOENIX – It began with a simple black backdrop. A white chalk grid followed. Next came pops of color, including blue, orange, red and brown.

In just three days, portraits of Brianna Turner, Skylar Diggins-Smith, Chris Paul, Monty Williams and Jevon Carter appeared on the west side of Phoenix Suns Arena. Behind them stand a group of marchers with fists raised in front of the city skyline and the phrase “Can’t Give Up Now” in bold letters.

The eye-catching mural of Phoenix Suns and Mercury figures is one of 28 being painted throughout Phoenix in February to educate and support the Black History Matters movement.

“I saw on Instagram the mural was going up, and I thought it was amazing,” Griner said. “Our organization has always been at the forefront honoring us and everything that we are.”

Gizette Knight, CEO of Reality Dreams LLC, created the Black History Matters movement with the hope of educating the population on lesser-known figures within black history.

“When you go to school, and they’re teaching black history they teach the same icons in the black community,” said Gizette, who has an undergraduate degree from Arizona State and a masters from Grand Canyon. “What I wanted to do is show that we’re more than just the civil rights movement and slavery.

“We have inventors. We have educators, philosophers, athletes. We have doctors. We have scientists, every industry in every category, black people have either impacted, or we paved the way in that category. So I wanted to highlight those people that don’t get that recognition.”

For 28 murals to be completed in just 28 days, Knight needed artists, and a lot of them, so she took to social media. She posted on Facebook, and shortly after, received responses from over 80 artists who wanted to be involved.

“We have artists that are mixed together, we have spray paint artists painting on a mural together with brush artists. We have a diverse group of artists,” Knight said. “We don’t just have black artists paint and murals for black history, we have white, we have Latino, we have Asian artists. So it’s just a unified project.”

Eli Farias and Lucretia Torva were two of those artists.

Torva was raised going to NAACP and Urban League events. Her parents were members of both organizations and were active advocates for the civil rights movement. For Torva, getting to use her artistic abilities to support the Black community was second nature. She took the lead on the Phoenix Suns Arena mural by taking the original design, blowing it up, creating the grid and painting the portraits of Williams and Paul.

For Torva the purpose of the project is simple. “Support the people that need the support and communicate and inspire those people who just haven’t quite gotten it yet,” she said.

Farias, a local Valley artist, has been creating art for over 10 years. During the pandemic, he took time to reflect on the work he was producing and the platform he has. He decided it was time to start using his position to voice his opinion and observations to empower others, and this project and mural were the perfect opportunity.

“The mural is just an observation of these community builders that are doing some great work,” Farias said. “It’s not always that we get to honor them. So here’s an opportunity to honor them.”

The five figures, as well as what they were wearing, were chosen specifically by the Phoenix Suns and Mercury. Chris Grasha, the creative lead for the Suns, designed the mural, combining five different pictures of each figure into one larger picture.

Each figure was chosen for a purpose based on their past efforts to support the movement including leading marches, writing letters and continuing to voice their opinions, the Suns said.

Participants on both teams said they were overwhelmed by the mural.

“I’m obviously honored and humbled that they would even ask to put me in it,” Williams said. “It’s a way to not only remember the history of African American people in our country and around the world, but also to also honor the people that have stood up for me, Black and white and brown and also a chance to remember.”

Paul, who was traded to the Suns in November, said, “It was pretty powerful. It’s an honor and a privilege. It says ‘Can’t give up now,’ and it’s pretty special and powerful to see that taking place.”

Added Mercury player Diana Taurasi: “We in Phoenix do better than anyone else as far as having initiative and things that are important to us as players to get across to the community.”

Farias and Torva said they recognized the importance of athletes standing up for what they believe in and using their platform to promote change.

“The organization picked the figures that we were going to paint, but it was an honor to paint them,” Fairas said. “I’m very thankful that they are taking a stand and at least utilizing their platform and their power to make some changes. And it’s what all of us should be doing.”

Added Torva: “All of those people are willing to take a stand for what they believe, regardless of what comes at them. That also sets an example for all of us. It’s like, ‘Well, they can do it. I can do it in my neighborhood or community.’”

The mural will stay for the remainder of the month. More information on the Black History Matters movement and the location of the other 27 murals can be found on Reality Dreams LLC Facebook page.

“I wanted to bring communities together and we’re doing that on a bigger scale with this,” Knight said. “So just by spreading the word and educating people on Black History Month, and historical figures, we’re bringing people together.”