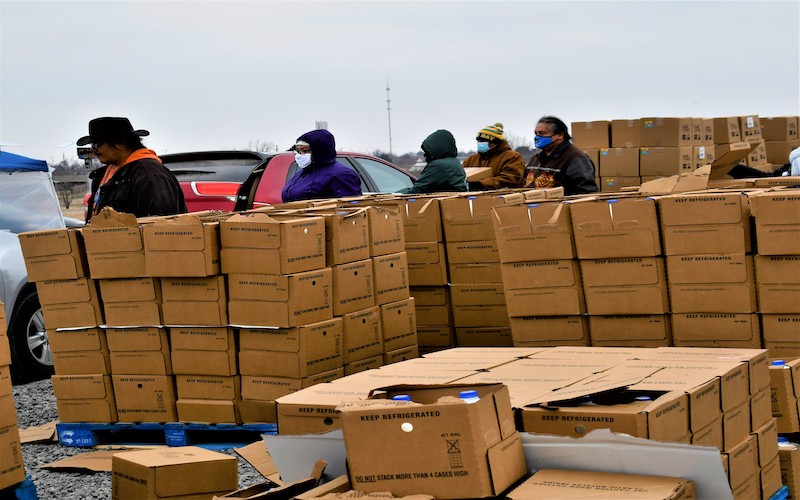 Kiowa volunteers work to provide nearly 45,000 pounds of boxed-up food to tribal members and non-Native members of the community. (Photo courtesy of the Kiowa Tribe) 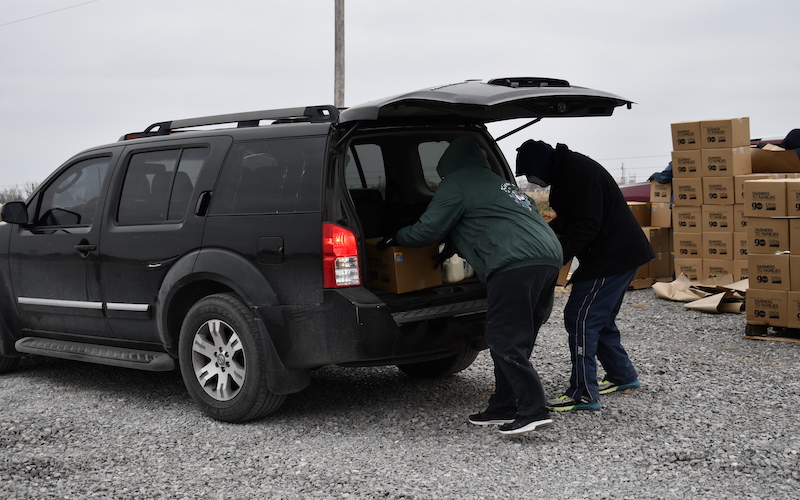 The tribe is offering free firewood, and households with tribal elders are the first priority.

“We are monitoring the storm and doing the best we can to get help to those most in need. We are clearing driveways to those in rural areas with extreme emergency needs to get in and out,” Kiowa Chairman Matthew Komalty said in a statement.

Cars line up for about four miles while people wait to receive boxes of food. (Photo courtesy of the Kiowa Tribe)

In sub-freezing weather conditions, more than 20 Kiowa tribal employees volunteered on the frigid plains of the Kiowa Dance and Activity grounds to hand out food boxes to anyone who showed up on Feb. 12.

The bitter cold didn’t deter those in need from showing up, and more than 45,000 pounds of food was distributed to tribal members and non-Native recipients, despite a two-hour delay when the food truck got held up in Tulsa due to the weather.

Glenn Powell, a non-Native, drove the first car in line. He said COVID-19 is no joke.

“I lost my job and everything, needing money and food.”

Powell said he was so grateful that he would be able to put something on his table.

Ahnawake Toyekoyah never took a break to warm up as she braved the wind to direct the two lanes of traffic.

The food box giveaway was part of a Farmers to Family and USDA grant received by the tribe. A community grant serves everyone, which is why tribal and non-tribal members were served, according to the news release. Cars were lined up for about four miles, and about 1,350 boxes of food — containing dairy, protein, vegetables and fruit — were handed out.

Darin Zotigh, director of the Administration on Aging for the tribe, was another volunteer. He had icicles on his eyebrows because it was so frigid.

“Even though it was cold outside, I had a warm feeling in my heart. It was good to see everyone deny themselves and their comfort and get out there and work together,” Zotigh said.

Nancy Marie Spears, a member of the Cherokee Nation, is a reporter for Gaylord News, a reporting project of the University of Oklahoma Gaylord College of Journalism and Mass Communication. Cronkite News has partnered with OU to expand coverage of indigenous communities.