Klee Benally of the Navajo Nation at a 2016 protest outside the Environmental Protection Agency in Washington, demanding cleanup of abandoned uranium mines. Even though mining stopped decades ago – and was banned by the tribe in 2005 – the fight to clean up the toxic sites has lingered. (File photo by Danika Worthington/Cronkite News)

WASHINGTON – The Environmental Protection Agency said Thursday it will award contracts worth up to $220 million to three companies for the cleanup of some of the hundreds of abandoned uranium mines on the Navajo Nation.

Work could start later this year following the completion of assessments for mining sites coordinated between the EPA and the Navajo Nation’s environmental agency, the federal agency said.

This week’s announcement is just the latest in years of efforts to clean up the mines, the toxic legacy of Cold War mining in the region. More than 30 million tons of uranium ore were mined in the region, according to the EPA, which said more than 500 mines were ultimately abandoned.

“From World War II until the end of the Cold War, millions of tons of uranium were mined on Navajo lands, exposing mine workers and their families to deadly radiation,” said Rep. Tom O’Halleran, D-Sedona, whose district includes the Arizona portion of the Navajo Nation.

“As a result, high rates of cancer, birth defects, and contaminated water sources remain a reality for residents of the Navajo Nation even now,” O’Halleran said in a statement on the contracts.

Officials with the Navajo Nation government and its environmental agency did not immediately respond to requests for comment Friday on the announcement.

Terms of the contracts require the companies to develop training programs “for Navajo individuals and businesses to promote professional growth” in areas related to the cleanup work. The companies have also partnered with local businesses on the project, the EPA said. 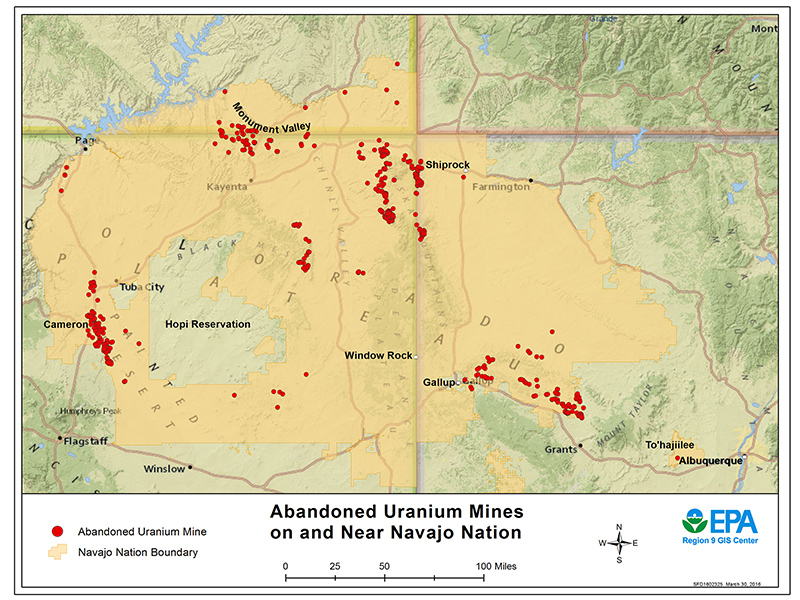 A 2016 Environmental Protection Agency map showing some of the hundreds of abandoned mines in and around the Navajo Nation. Tribal and federal officials have been working for years on cleanup plans for the mines. (Map courtesy the EPA)

The agency said it worked closely with Navajo Nation to develop contracts that would incentivize the creation of employment opportunities for Navajo residents in order to build local economic and institutional capacity.

The majority of funding for the contracts comes from a nearly $1 billion settlement made in 2015 with Kerr McGee Corp. for the cleanup of more than 50 mines in Nevada and on the Navajo Nation that the company and its successor, tronox, were responsible for.

From the late 1940s through the 1960s, Kerr-McGee mined more than 7 million tons of ore on or near the Navajo Nation, leaving behind uranium mine sites that included contaminated waste rock piles. Exposure to uranium in soil, dust, air, and groundwater, as well as through rock piles and structural materials used for building can pose risks to human health, according to the EPA.

Mining stopped for the most part decades ago, and the Navajo Nation banned uranium mining on its lands in 2005. But the cleanup effort has lingered. The EPA launched five-year programs in 2007 and 2014 to study the issue and identify the biggest risks, and the agency last year added abandoned Navajo uranium mines to its list of Superfund sites “targeted for immediate, intense action.”

Representatives of Indigenous environmental groups did not respond to requests for comment and an official with the Grand Canyon chapter of the Sierra Club said she was not familiar enough with the contracts to comment – but did express concerns that there is no federal standard for what mine cleanup entails.

A regional EPA official said that the “contract awards mark a significant step in this ongoing work.”

“I am glad to see my oversight efforts have pushed the EPA to make these critical investments,” he said in a statement Friday.