Monty Williams has succeeded at establishing a winning culture with the Phoenix Suns despite a challenge to establish consistency. At least two rotational players have missed their last 10 contests due to injury or health and safety protocols. (Photo by Christian Petersen/Getty Images)

PHOENIX – With eight new players on his roster, Phoenix Suns coach Monty Williams has had to continuously solve puzzles with his team’s rotation and chemistry. But more often than not, he has not had each piece at his disposal.

Of the Suns’ 24 games played, they have rarely had their full rotation available. At least two rotational players have missed their last 10 contests due to injury or health and safety protocols, an issue that grew Monday when they had five players out during their 119-113 win over the Cleveland Cavaliers.

Now that his team is one-third of the way through its 72-game season, Williams has accepted he can only work with the pieces in front of him.

“Just because of the way the COVID the situation has hampered us with injuries,” he said. “The back-to-backs, like I think you have to have some versatility this year. And so the comfort level is probably game-to-game and just being able to adjust.”

As a result of its absences, Phoenix has altered its rotation multiple times. Forward Frank Kaminsky, who signed with the Sacramento Kings this offseason before being reclaimed by the Suns on Dec. 21, became their starting power forward on Feb. 5. Guard E’Twaun Moore, who did not play in 13 of their first 15 games, has elevated his role in recent weeks, starting at point guard and playing 40 minutes against Cleveland with Chris Paul and Cameron Payne out of the lineup. 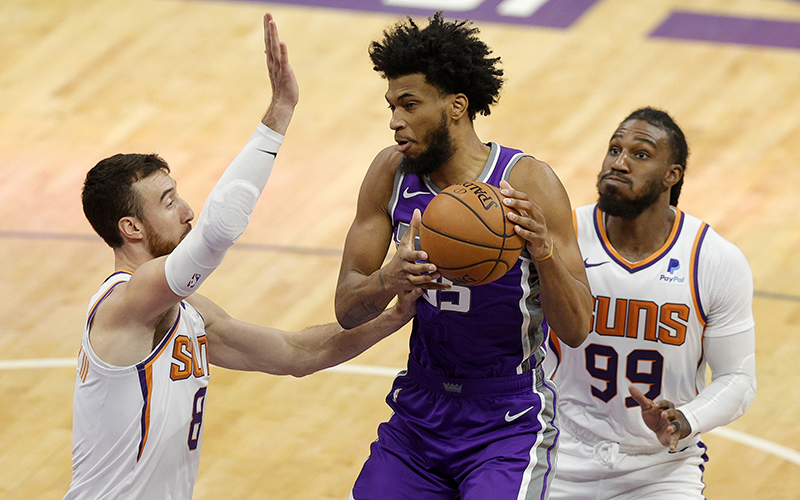 Those challenges have been difficult to navigate, but Williams and his players have insisted their culture — in which relentlessness and competition are top focuses — has kept everyone prepared. The Suns have looked the part on the court, winning seven of their last eight games — including a big 125-124 victory over the Milwaukee Bucks Wednesday night — to ascend to fourth in the Western Conference standings behind the Utah Jazz, Los Angeles Lakers and Los Angeles Clippers.

“It’s just part of the process of trying to get where we want to get to,” Williams said after his team’s win over Milwaukee. “I look at these wins and I’m grateful for every win, but I think it’s in the building that we’re trying to build here. We’re trying to be the last team standing someday and it takes a lot of work.”

After the NBA finished its 2019-20 season in Orlando on Oct. 11, teams had to quickly gear up for a new season. Training camps began on Dec. 1 and regular-season games started Dec. 22, leading to a compressed time frame for a 72-game regular season schedule that is tentatively planned to end May 16.

As a result, the Suns are playing more often, limiting their practice time. They have already played back-to-back games five times, including three that have been on the road.

To adjust, Williams said he has turned Phoenix’s pregame shootaround sessions into “mini-practices,” trying to maximize its understanding of his principles.

“Even though we’re playing in this baseball-type scheduling where we stay in a city and play a team back-to-back settings, even if it’s a day in between, we still try to rest guys and understand all the stuff that they’re dealing with,” Williams said. “And so shootarounds become a chance for us to practice and build chemistry and camaraderie, talk through a lot of stuff, use video to teach. Those are just a few things that we’ve tried to do.”

The situation might be different, but the Suns’ players have insisted that competition is at a premium whenever they’re together. Guard Langston Galloway, who is in his seventh NBA season, said Phoenix’s culture is “the best situation” for his development and growth, particularly due to its personnel and Williams’ presence.

“No. 1, winning culture,” Galloway said. “He (Williams) has really instilled that. But also two, that competitive edge. I think we have a lot of younger guys but also two, we have older core. And I think that’s what really is fun for me because I’m able to go out every single day.

Galloway, who averaged 17.2 minutes in a seven-game stretch from Jan. 30 to Feb. 8, and Moore are among the players who have seen their roles increase in the last few weeks. Their presence has correlated with the Suns’ current four-game winning streak, steadying their defensive coverages and adding “know-how” on the floor. 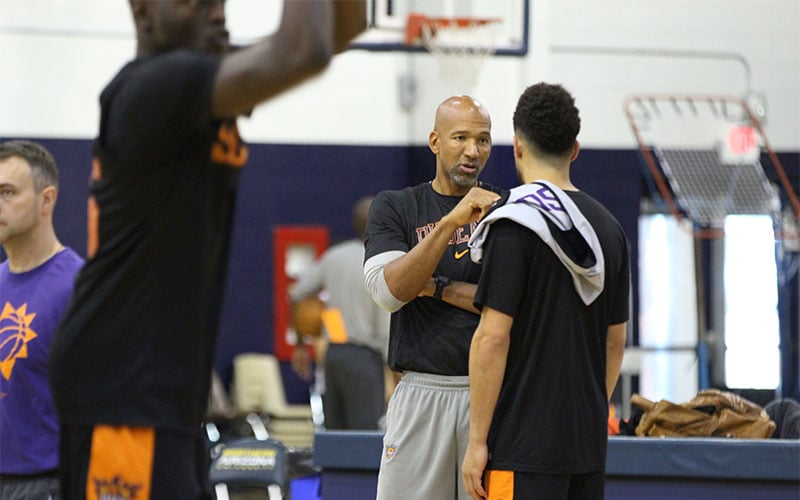 Williams has turned Phoenix’s pregame shootaround sessions into mini-practices, trying to maximize its understanding of his principles. (File photo by Karrissa Herrera/Cronkite News)

Williams said after Monday’s game against Cleveland that he recently sent text messages to Galloway and Moore, thanking them for their professionalism and work ethic. Moore, who said Williams was one of the biggest reasons he signed with Phoenix, added that his coach’s faith has kept him upbeat, even when he wasn’t playing.

“Sometimes guys who don’t even play for a while, some guys get down on yourself and you be like, ‘Dang,’” Moore said. “You don’t feel like you’ll ever play. But coach always did a great job of keeping us involved, even when we were in practice, making sure we’re paying attention, keeping us engaged. It paid off, for sure.”

Despite their fluid rotation, the Suns have been one of the NBA’s most consistent teams on both ends of the floor. As of Feb. 10, they rank fifth in the league in defensive efficiency, according to TeamRankings, relying on multiple efforts with their weakside coverages and rotations to make possessions difficult. Offensively, they are ranked 14th, something they hope to improve while playing more of a halfcourt pace with point guard Chris Paul and establishing continuity in their lineup.

But no matter who they have available, the Suns trust they will have the pieces to compete on a nightly basis.