Despite another stoppage, ASU men’s basketball looks to keep its momentum 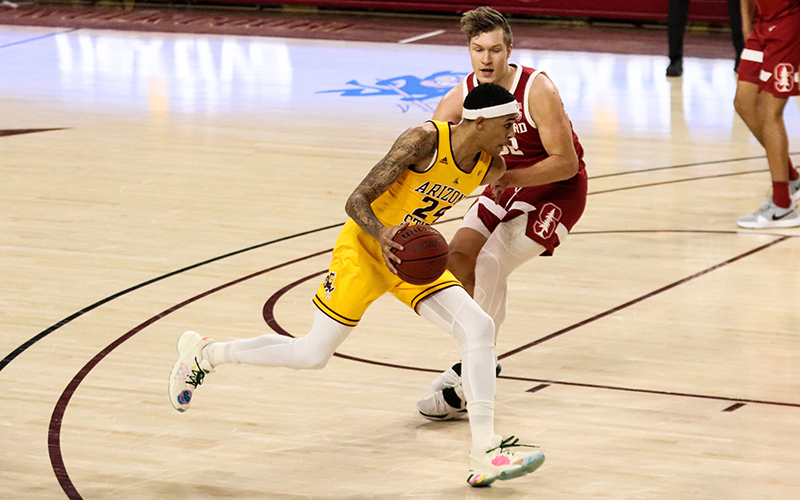 The Arizona State men’s basketball team hopes to build on its first weekend sweep in Pac-12 play. Jalen Graham could help that cause. In the past three games, he averaged 12.7 points and 6.3 rebounds. (Photo by Marlee Smith/Cronkite News)

TEMPE – For Bobby Hurley’s team, finding a rhythm in a season that has been full of irregularities has been one of the toughest challenges.

It didn’t get any easier for ASU last week. Coming off of back-to-back wins over California and Stanford, their first weekend sweep in conference play, the Sun Devils were faced with yet another COVID-related stoppage. This time, two games against Utah and one against Colorado were postponed.

The postponement of the mountain road trip and Utah’s trip to Tempe was the second stoppage this season related to contact tracing in the ASU program. The timing couldn’t be any more inopportune, considering the Sun Devils’ last couple games were perhaps the best they have played.

The Sun Devils now face the challenge of keeping their momentum, despite a lengthy 11-day stoppage. Hurley compared his team’s situation to that of ASU’s football team, which had several games canceled back in the fall.

“It’s been very difficult to develop any consistency to what we’re doing and get more games under our belt,” Hurley said in a Zoom newser Wednesday. “But we’re not alone, we have company this week.”

As Hurley pointed out, the Sun Devils return to play Thursday night against the Oregon Ducks, a team that has faced similar cancellation issues throughout their season. Both teams have played only 14 games and had six games postponed.

Despite the challenges, Oregon has posted a 10-4 record and remains one of the tougher teams in the Pac-12. The matchup provides the ASU with one of its bigger tests of the season, something Hurley seemed to be looking forward to.

“You try to keep things in perspective and realize the opportunity you have,” Hurley said. “I mean, our guys have the chance to go play (Thursday) night against a really good Oregon team that’s probably been consistently the best team in the conference year in and year out since I’ve been coaching in the Pac-12, and it’s on ESPN. If that doesn’t get your juices going, then there’s something wrong with you.”

To try to keep their upward trend, ASU will look to Jalen Graham to continue his solid play of late. In the last three games, Graham averaged about 12.7 points per game and 6.3 rebounds per game. In the Jan. 25 game at Arizona, the sophomore from Phoenix put up the first double-double of his college career with 14 points and 11 rebounds.

Like his coach, Graham sees an opportunity to persevere through the adversity that another stoppage brought.

“We just try to come back and pick up from where we left off,” Graham said. “That’s all you can really do. Just come back with the same energy, same pace and just keep trying to build.”

Going into the season, many placed high expectations on ASU to keep up its successful upward trend under Hurley. In the Pac-12 Preseason Media Poll, the Sun Devils placed second, behind only the UCLA Bruins. ASU received five first place votes and only five less total points than UCLA.

The season hasn’t quite lived up to those lofty expectations. ASU (6-8, 3-5 in conference) sits in ninth place in the Pac-12. Between Dec. 10 and Jan. 25, the team lost seven of eight games. The only win in that stretch came over GCU on Dec. 13, when Remy Martin hit a three-pointer with just seconds left to avoid the upset, 71-70.

The last couple games have been a different story though, and Hurley likes what he has seen out of his team.

“I just like the direction we’re heading, you know,” Hurley said. “Coming off two wins, especially against Stanford. They were down a couple guys, but they had some big wins prior.”

ASU now faces the tough task of attempting to make up as many of its six postponed games as possible. Any chance of still sneaking into the NCAA Tournament would likely rely on a hot streak over several weeks that Hurley said would have to be scheduled “aggressively.”

Even though the team has looked better recently, the Sun Devils aren’t quite ready to start setting their eyes on the postseason.

“I just think we can’t focus on that yet,” Hurley said. “We still have a lot of growth, I think, and potential, and those are dangerous words. But we have to treat every game like it’s our last game right now.”