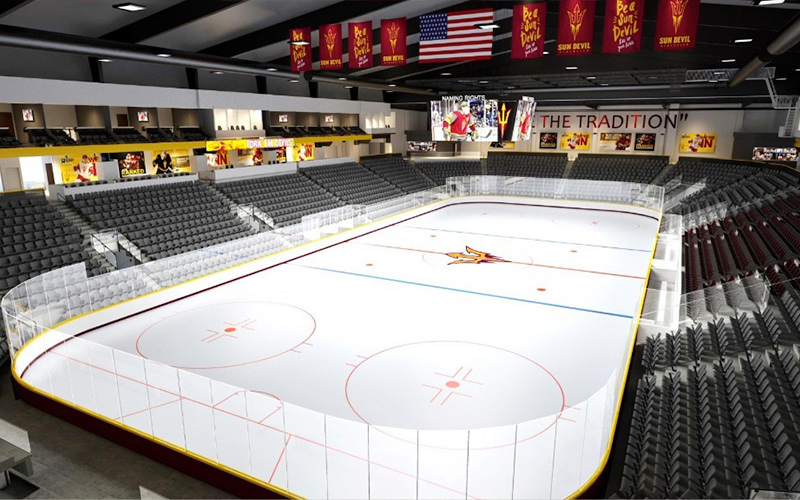 ASU’s new mutli-use facility, which is expected to be completed in December of 2022, will seat 5,000 and feature luxury suites. (Rendering courtesy Arizona State)

TEMPE – When the 2019-20 NCAA hockey season was shut down by COVID-19, Arizona State’s men’s team ranked 13th in the nation by both the USCHO and USA Today polls. The Sun Devils peaked in Week 19 of that season, when both polls placed them at a program-best ninth overall.

But even with that success, the team could only manage 747 fans, though not for a lack of popularity. As it has been since 1979, the ASU hockey program was limited by the confines of Oceanside Ice Arena.

Within the next few years, the program may be able to finally reach its full potential. In December 2020, ASU announced that it would begin building a new multi-purpose arena to house hockey, wrestling and gymnastics. Construction began in January, with completion of the 5,000-seat venue projected for December 2022.

“Oceanside can only hold 800 seats maximum, give or take,” he said. “So that is not conducive to playing Division I hockey. It was always a temporary solution, until we were able to get a permanent facility.” 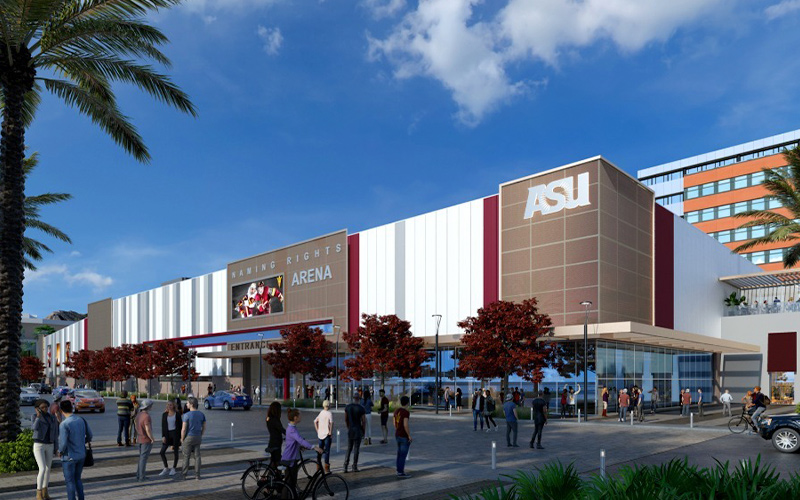 The new facility will serve the hockey, gymnastics and wresting teams. It will be on campus and much more accessible to students. (Rendering courtesy Arizona State)

The $115 million facility will also include luxury suites and a club level for fans, and a players lounge, weight room and nutrition bar for athletes. An adjacent community rink, open to the public, will also be built.

Both rinks will be a part of the Novus Innovation Corridor, a 355-acre project aiming to redevelop the corner of campus near the intersection of Rio Salado Parkway and Rural Road into a hub of retail, entertainment, housing and office space.

Currently unnamed, the multi-purpose arena will be within walking distance for most on-campus students. Oceanside, for comparison, is roughly three and a half miles from campus center. But Ferrara stressed that “the impetus was always because of the lack of a permanent facility,” rather than proximity to campus.

That much is clear when comparing the hockey situation to that of ASU’s other off-campus sport, baseball. Since 2014, the team has played its home games at Phoenix Municipal Stadium, which is also approximately three and a half miles from the main campus. But due in part to the facility’s size and quality (it was renovated in 2019), Ferrara said, there are no plans to move baseball closer.

“The deal that we have with the City of Phoenix is a 30-year deal for that facility,” he said.

Additionally, Packard Stadium, baseball’s former on-campus home, is set to be demolished. The land will be used for the Innovation Corridor. Plans for that specific plot of land have not been announced.

From a revenue standpoint, baseball and hockey are the university’s two largest sports after football and men’s basketball. Those top two sports generate roughly $20 million combined in revenue each year, said Mike Meitin, Senior Associate Athletic Director for Ticketing, Baseball is next at $750,000, its annual revenue increasing 25% after its move from Packard to Phoenix Municipal.

Hockey generates about $150,000 per year. But Meitin expects that number to increase as much as tenfold with the upcoming move to the new arena. He’s also optimistic about the new facility’s impact on the school’s wrestling and gymnastics programs.

But the pandemic caused almost all of those revenues to disappear for 2020 and into 2021. As vaccine distribution trudges along, Ferrara wouldn’t yet speculate on the possibility of having limited fans in attendance for ASU baseball games, citing a reliance on guidance from the county and state governments as well as university doctors and medical staff.

Meitin added that, if fans are eventually allowed back, the focus won’t be on revenue.

“We would be doing it more from, you know, just the excitement of being able to get the community back to our games, than from a financial standpoint at this point,” he said. “That’s how we would use this spring, is let’s just try to get some people back out to support our program, to show that we can do this safely. That kind of stuff.”

When fans do return, both Oceanside and Phoenix Municipal will be as accessible as ever. While distance remains an obstacle, ASU has made significant efforts in recent years to make it easier for students to attend.

Meitin cited the move to mobile ticketing, after which students no longer had to wait in long lines for wristbands to enter games, as well as the light rail station near Phoenix Municipal. Ferrara added that, for bigger games, the university provides buses to both venues. Both facilities have sizable student sections that put fans right in the middle of the action.

Ferrara also stressed that, despite the current arena’s limitations, fan turnout for hockey has been fantastic.