PHOENIX – Since the COVID-19 pandemic changed the landscape of sports competition, teams around the country have adjusted to playing in empty or near-empty arenas, making home-field advantage less of a factor.

For Grand Canyon University, however, their fan base, the Havocs, continues to provide noise and energy that has impressed opposing coaches but also attracted attention for its crowded student section over the weekend.

When this NCAA basketball season began, GCU announced that around 250 on-campus students would be allowed to attend games.

“It’s been a really great way for the students to have a fun environment to come and just party with the Havocs,” Havocs leader Joshua Gillespie said.

After seven home games averaging 283 fans per game, GCU increased its capacity to allow more on-campus students to attend. The capacity was bumped up to around 900 on-campus students, approximately 13 percent of GCU Arena’s 7,000 capacity.

“This decision was made by closely monitoring basketball-related attendance through the first two months of the season,” GCU said in a statement. “GCU’s number of on-campus active COVID-19 cases remains low (less than 1% of the student population). In performing contact tracing of positive cases this academic year, it revealed that, due to the precautions taken, attendance at basketball games did not contribute to additional COVID spread.”

If its model works, other universities could follow suit.

Students on campus were assigned pods spread throughout the north side of the arena. The pods are made up of close friends and roommates that were distanced from other pods. Mask were required. 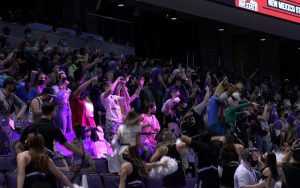 Grand Canyon University’s student section, the Havocs, provided a high energy atmosphere for the basketball program over the weekend. Some students, however, left their seats in the pods they were assigned. (Photo by Jordan Spurgeon/Cronkite News)

Concern arose over the weekend when students clustered together on the north side of the arena instead of staying in their assigned pods, only separated by one empty row between each full row. Assistant athletic director Josh Hauser said that the university is looking at ways to better enforce the pod assignments to ensure physical distancing between pods at games.

“Even with COVID and the limited fans, we have the best environment in the country and I am excited to get a few more in there,” said GCU head coach Bryce Drew, who is in his first year with the program.

The decision came just in time for a two-game series against Western Athletic Conference rival New Mexico State, who has not only had the Lopes number since GCU’s move up to Division I, but has been the class of the WAC over the last decade.

“You look at the history of what they’ve done, it’s remarkable, you know. The winning streaks, the conference championships, a lot of really talented players in their program, and really good coaching for them to win all those championships and games that they have,” Drew said.

New Mexico State has won seven of the last eight WAC tournaments, including the latest two finals over GCU, to earn automatic bids to the NCAA Tournament. Heading into the weekend, the Aggies had won 31 straight conference games and eight straight vs GCU dating back to Feb. 2017. The Aggies were 15-2 overall against GCU all-time heading into the series.

The Aggies had only played four games on the season heading into the game, including just one against a Division I opponent due to COVID issues surrounding their program and opposing programs.

For both games, those students brought a high level of energy.

“We could feel the fans’ energy on the court and it was big-time tonight,” guard Mikey Dixon said.

GCU won both games to sweep NMSU for the first time in program history.

It’s not just the home side that feels the intensity from the crowd, either.

“It reminded me of what basketball was like prior to COVID,” said ASU coach Bobby Hurley, whose Sun Devils beat GCU 71-70 on Dec. 13, when 354 students attend that matchup.

“They know how to do it. … Of all the places we’ve been, this has been the best spot,” Nevada head coach Steve Alford said. The Wolf Pack lost to GCU on Dec. 11.

Even in the midst of a unique season, GCU can fall back on the home support system that it has grown accustomed to over the last several years. Since GCU made the transition to Division I before the 2013-14 season, it has gone 98-30 (.766) at home, as opposed to just 37-46 (.445) on the road over the same stretch.

“I wish I could see it at full capacity,” Drew said.

Until then, the Havocs are doing their best to make their arena reflect pre-COVID days.